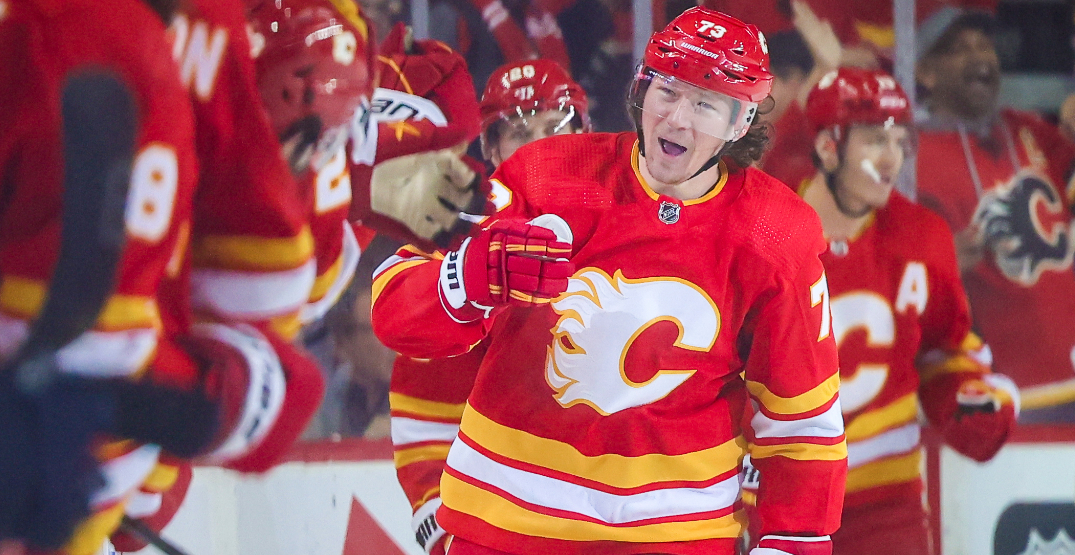 Five goals in his past five games ain’t bad for a newcomer.

And Tyler Toffoli is coming exactly as advertised for the Calgary Flames.

“He’s a goal scorer,” Calgary coach Darryl Sutter said after Toffoli’s latest exploit — a two-goal outing lifting the Flames to a 3-1 win against the Edmonton Oilers in the Battle of Alberta.

“He only needs one chance to score. So he had two chances and scored two goals, and he was probably quite honestly pissed off because he had that shorthanded breakaway he tried to come back on, right?

“Those guys are special players. You can’t teach guys to score.”

Toffoli, affectionately called “teapot” on the team’s social media outlets, certainly hasn’t needed an instruction manual to do that with the Flames. He’s not about to Google Maps a route to the front of the net, either.

The fact remains Toffoli, acquired on February 14 from the Montreal Canadiens in exchange for forward Tyler Pitlick, forward prospect Emil Heineman, a first-round pick in the 2022 NHL Draft, and a fifth-round pick in the 2023 NHL Draft, has provided the much-needed depth scoring for Calgary that general manager Brad Treliving was hoping for when he ponied up the small ransom.

Though, with seven goals in 10 skates, it’s probably more apt to call Toffoli’s efforts of the primary nature.

And deserving of his own signature song at the Saddledome.

“When you look at the goals he scores, too, it’s not one position or the same goal,” Calgary goalie Jacob Markstrom said. “He scores on the power play, he scored in front of the net in Minnesota, he scores 2-on-1 going high glove today and almost scored on the breakaway when we went around the goalie.

“He’s a goal scorer and it’s nice to have him on our team.”

He’s done it aligned with Sean Monahan and Milan Lucic.

He did it Monday alongside the team’s leading goal-getter in Andrew Mangiapane and rookie centre Adam Ruzicka.

About the only time he didn’t do it was on a shorthanded breakaway against the Oilers, running out of real estate on a slick deke that he couldn’t quite tuck that, in hindsight, might’ve robbed the slick-shooting 29-year-old of a hat-trick.

“I take pride in my scoring opportunities and anytime you get a look like that, clear cut breakaway, you want to put it in, especially early on in the game like that,” Toffoli said.

He responded with consecutive goals in the second period.

“I think he was drafted primarily for that reason,” Sutter said.

“He as a big scorer…I believe he won rookie of the year in the American (Hockey) League, so probably did that because he was a goal scorer.”