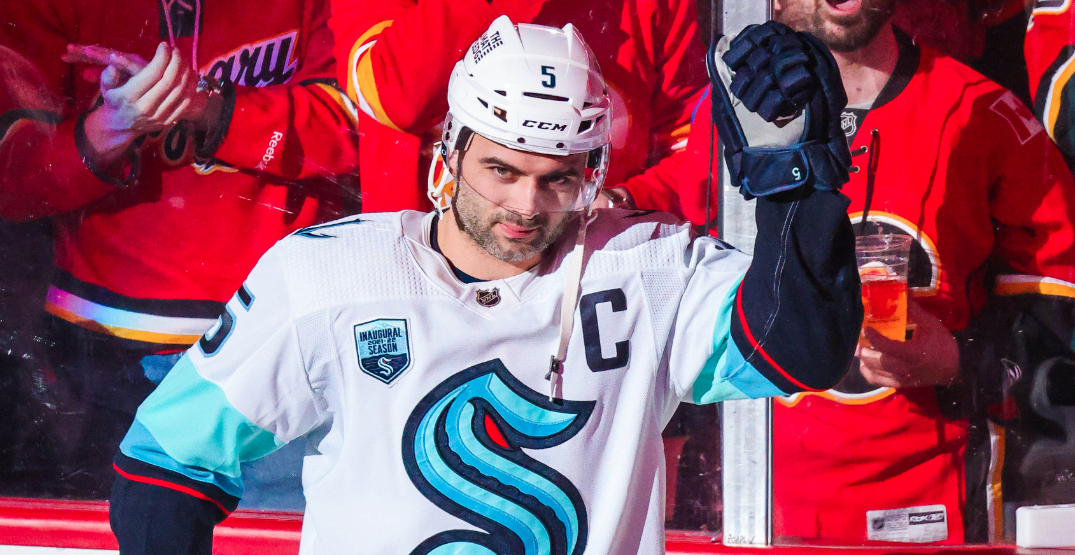 Mark Giordano will play his 1,000th NHL game in dual-blue of the Seattle Kraken.

Almost a crime for the 38-year-old defenceman who logged his first 949 skates in the red and yellow, and sometimes black, of the Calgary Flames.

But that’s the nature of the business.

And it didn’t stop former teammates from celebrating Giordano’s accomplishment in advance of Seattle’s game against the Washington Capitals — the mile-marking skate for the longtime Flames captain.

“Hey Gio, congrats on 1,000 games,” said Calgary centre Mikael Backlund, teammates with Giordano for 13 seasons. “What a great achievement, being underrated and working your way to 1,000 games. Thank you for everything you’ve done for me and for the Calgary Flames organization during your 900-plus games here. I was lucky enough to be a part of about 700 of them. You’ve been so nice to me since Day 1.

“Enjoy your 1000th game, enjoy your night, and again, very, very happy for you and your family. It’s a well-deserved achievement for you. I hope you keep this rolling and play a few more games, and get to win the Stanley Cup. Good luck, Gio, and have a good night.”

You’ve had an impact on so many, @MarkGio05 – follow our thread for well wishes on Game 1000. pic.twitter.com/N0vRbOGzqV

Backlund, the longest-active serving member of the Flames, witnessed much of Giordano’s work in Calgary. That included 509 points (143 goals, 366 assists) over parts of 15 seasons with the Flames in which he is now first all-time among Flames/Atlanta Flames defensemen in games, second in goals and third in assists and points.

“Such a great achievement of you, especially for how hard and how honest you play the game,” Flames forward Milan Lucic said to Giordano, who serves as the first captain in Kraken history. “Happy to call you my friend. Happy to have been teammates with you, shared some of the ride with you. Congratulations to you and your family and I hope you enjoy it.”

The Big Man, wishing you all the best. pic.twitter.com/8zDxbLus13

An amazing accomplishment, no doubt.

Especially since it’s the culmination of a lot of work to even get to that first game.

Giordano was never drafted into the National Hockey League, and made his way into the NHL only after battling through a free agent entry-level contract signed in 2004.

Worthy of a nod from teammates, indeed.

“You’re one of the hardest workers I’ve had the privilege to play with, and you’re an awesome teammate,” former Flames captain Jarome Iginla said. “Also congratulations on being the Kraken’s first captain in team history. Pretty cool. Keep going, my friend.”

Iggy has a message for you, Gio. pic.twitter.com/PfRl7POMMb

Giordano was selected by the Kraken in the 2021 NHL Expansion Draft last summer, and was treated to a standing ovation on his return to Calgary last month.

Giordano also won the Mark Messier NHL Leadership Award in 2019-20. The award is presented to the player who exemplifies great leadership qualities on and off the ice and who plays a leading role in his community growing the game of hockey.

Each of the awards came with the Flames.

A message from Tanny. pic.twitter.com/fRhV54DIJv

Giordano has 23 points (six goals, 17 assists) in 50 games with Seattle this season, and is a pending unrestricted free agent at season’s end.