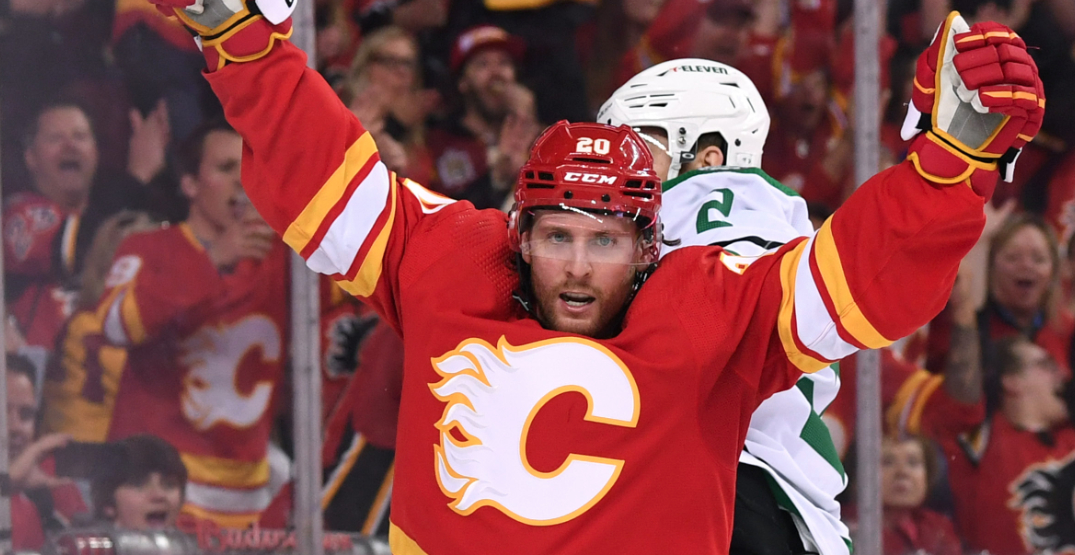 Mikael Backlund tapped the puck across the line, and was celebrated as the scorer who kickstarted the rally that helped the Calgary Flames earn a 3-1 win in Game 5 and take a 3-2 lead in their best-of-7 opening-round Stanley Cup Playoffs series against the Dallas Stars.

It was Andrew Mangiapane who slid a slick feed to Backlund for the tap-in, skipping the puck through the skates of a Stars defender and catching stopper Jake Oettinger off guard with a nifty pass by the top of the blue paint.

But it was Blake Coleman’s work which made the latter two successful, quietly setting the table by carrying the puck deep into the offensive zone, working the puck deep, and drawing two Dallas defenders behind the net to allow Mangiapane to serve the evener on a platter to Backlund.

“Seen it the whole game,” Flames coach Darryl Sutter started when prompted about Coleman and his third-period heroics to help turn a deficit into delight in the series’ tipper. “If you only see it in the third period, well…he’s a great competitor. It’s not like he’s a star.

“He’s got to be a great competitor every shift.”

Hard to argue, for the most part, that he hasn’t.

Scroll through any image gallery of the Stars/Flames series and search Coleman. You’ll find images of him either knocking someone down, being knocked down, diving for a puck, or swiping one away.

It’s the visual representation of the will and battle he’s brought to the Flames.

It’s why Calgary brought him in.

“It’s hard during a game,” Sutter started when prompted about where he sees the impact of Coleman’s game most. “For lack of a better word, you get the shit kicked out of you during a game, and you’ve got to be willing to do it to somebody else. There’s players that do and players that don’t.

“When you ask ‘oh how come that guy didn’t play’ or ‘how come he’s struggling’ or something like that, that’s why.”

Even that is a shockingly incomplete marker that’s missing the half-dozen scrums, off-puck altercations, and face-washes that have quickly become a staple in any Coleman shift.

In all, Coleman is second on the team with 15 hits in the series. He’s second among forwards with four blocks. He’s been on the ice for 24.5% of Calgary’s shorthanded time.

All while ranking 15th among all skaters in ice time. Through five games.

He doesn’t necessarily stand up and speak in the room.

But he does a lot of talking, figuratively, on the ice.

“I don’t know that I have to be a rah-rah guy,” admitted Coleman a day before the Flames look to close out their opening-round series in Game 6. “We have a handful of guys that have won Cups and gone on long runs, things like that. There’s guys that have handled their business in winning that fourth game.”

But Coleman’s the most recent.

And, recently, most successful.

He’s closed out eight straight as a member of the Tampa Bay Lightning, hoisting Lord Stanley’s Cup in both 2020 and 2021.

“I think the recency effect does,” Sutter said.

“There’s all these older guys that have won it, and it’s hard to go that far again, and they have to challenge themselves to see if they can because it’s a huge price they pay. Then there’s probably younger guys that win it and they don’t remember what happened. They’re kids.

“But I think the recency effect has a lot to do with it. I think Blake Coleman and Trevor Lewis and [Tyler Toffoli] going last year to the Finals too.

“I think that has a bigger impact than anything.”