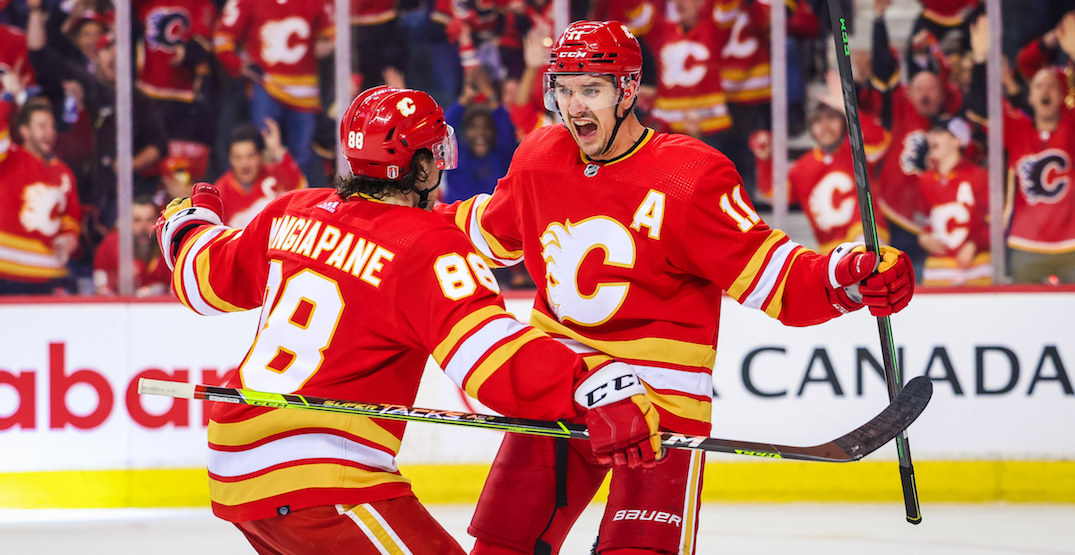 The Calgary Flames were the sixth-highest scoring team in the NHL during the regular season.

You wouldn’t have known that by watching this series, but the Flames still found a way to get it done in Game 5.

Although the Flames struggled to generate anything through two periods, Mikael Backlund, Andrew Mangiapane, and Trevor Lewis each scored in the final frame to help the Flames rally back and beat the Dallas Stars 3-1.

Calgary now has a 3-2 series lead, with Game 6 taking place in Dallas on Friday night.

The Flames have a chance to advance to the second round for just the second time since their Stanley Cup Final run in 2004.

The atmosphere in the Red Lot? 🔥 pic.twitter.com/PlebPtsc9A

Through 40 minutes of Game 5, Stars head coach Rick Bowness couldn’t have asked for a much better road game from his squad.

Dallas held Calgary to 16 shots through two periods, including just one high-danger scoring chance at even-strength.

Jason Robertson scored his first career postseason goal in the second period, giving Dallas a 1-0 lead heading into the third.

That’s when the Flames started to turn it on.

Backlund finally found a crack in Oettinger’s armor, as he buried his second goal of the playoffs just past the six-minute mark of the third.

Just under four minutes later, Mangiapane wristed a laser past the Stars netminder, which stood up as the game-winner.

Lewis buried an empty-netter to seal the win for Calgary.

The Flames only registered three five-on-five goals in the first four games of this series. With both Backlund and Mangiapane’s goals coming at even strength, the Flames were able to increase that total to five in a matter of minutes during the third period.

Goaltending has clearly been the story of the series so far, and both netminders were on their game once again tonight.

Jacob Markstrom stopped 20 of 21 shots in the victory. His .952 save percentage through five games is second only to Oettinger (.955) among netminders this postseason.

The Stars’ netminder stopped 29 of 31 shots in the loss.

Mangiapane talked after the game about scoring his first goal of the postseason.

“It was big. [I was] obviously a little happy there,” the 27-year-old sheepishly told reporters.

“Job’s not done obviously. We gotta prepare for the next game.”

The winger was pointless in four games heading into Game 5, but he was Calgary’s offensive star of the night with the primary assist on Backlund’s marker, along with the game-winning goal.