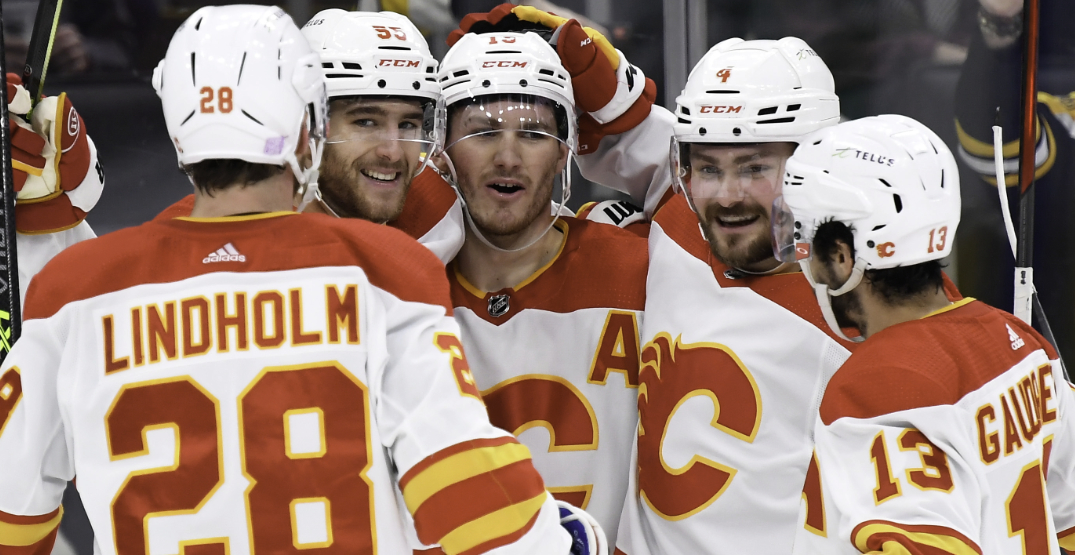 First in the Pacific Division. Tops in the Western Conference.

Not the worst start. Even under trying circumstances.

Head coach Darryl Sutter has his crew finely tuned to the tune of a 12-3-5 record. The run has included both a 10-game point streak and the current seven-game heater.

It’s well above the expectations most set for the Flames following a season where Calgary missed the cut line in a 56-game sprint in the North Division.

They must not have gotten the message.

“We’re not getting ahead of ourselves,” Flames general manager Brad Treliving told Sportsnet 960’s Boomer in the Morning on Thursday. “As much as everybody had us dead and buried in the summer, we didn’t think we were that. As much as everybody wants to anoint us right now, I don’t think we’re that. I think you have to be steady on the wheel at all times.

He should. Fans too.

And here’s what’s been most encouraging for the Flames through the first quarter of the season.

Calgary’s 10 wins when leading after two periods is bested only by the Florida Panthers. They lead the NHL with 24 first-period tallies and are second only to the Edmonton Oilers with 26 third-period markers.

The Flames are 9-2-2 away from home, too. Those nine wins top the NHL.

In fact, their only blemishes might come from the fact that they’re just 3-1-3 at home, 1-2-3 against the Western Conference and 0-2-1 against the Pacific Division. Chalk it up to lack of opportunity.

2. The stars are shining again

It was a dramatically down year for some of Calgary’s top gunners in an awkward, shortened North Division campaign in 2020-21.

Elias Lindholm, who had 47 points (19G, 28A) in 56 skates last season, has also turned it up. He’s up to 22 points (8G, 14A) in 20 skates, and if that pace continues, it’ll serve as his first full point-per-game season in the NHL. He’s projected to finish with 32 goals, which would be a career best, as would his 57-assist trajectory. He currently paces the NHL with a plus-19 rating.

Last year, Matthew Tkachuk netted an NHL career-low 43 points (16g, 27A), albeit over a 56-game schedule. He’s been quick to remedy that with 18 points (9G, 9A) in 20 games. Surely a 37-goal season would restore some of the shine to the pesky forward.

The only down note amongst Flames forwards seems to be centre Sean Monahan, who will be afforded some time following offseason hip surgery. Monahan has two goals and nine points in a depth role in Calgary’s bottom six.

As good as the offence has been, how about that blue line…

3. The defence has been crisp

As a team, Calgary’s allowed the second-fewest goals against this season at 38. The Carolina Hurricanes, tops at 36, have played two fewer games. The Boston Bruins, the next closest at 44, have played four fewer contests.

It’s not so much the defence as the checking, as Sutter will remind media. That checking, though, has the Flames posting the third-most effective penalty kill at 87.7%, tucked widely behind the NHL-leading Pittsburgh Penguins at 89.8%. It also has Calgary at the fifth-fewest shots against, surrounding 29.4 pellets per game for their goaltenders to deal with.

The ultimate number says it all: the Flames are tops in goals against per game, at a paltry 1.89.

The goaltenders are playing a bit part in that, too…

4. The goaltending has been spectacular

This isn’t a slight on Jacob Markstrom in any sense, but it’s tough to imagine anyone suggesting the Swedish netminder would log five shutouts in his first 15 games of the season — especially when his NHL career-high over an 82-game schedule is three, and he had just eight in his 315-game career between Calgary, the Vancouver Canucks and Florida Panthers.

His 1.73 goals-against average slots him third among crease-dwellers who have played five or more games, as does his .940 save percentage.

Do the @NHLFlames have the best goalie tandem in the League right now? pic.twitter.com/sTwWGO5DIJ

First in both categories? Understudy Dan Vladar. Vladar himself has logged two shutouts in five starts this season and remains undefeated in regulation with a 4-0-1 mark. His sparking 1.57 goals-against average and .946 save percentage is tops.

The combined seven shutouts early in the season certainly created a buzz.

The duo aren’t the only unexpected eye-openers, either…

5. They’ve had some pleasant surprises

Raise your hand if you had “twin turbo” Andrew Mangiapane second in the NHL in goals with 15 — six clear of his closest teammate. Now put it down. Liar. But the fact remains that the 25-year-old has been lights out within 15 feet of the net, converting on 30.6% of shots this season. That’ll regress a bit, but it won’t affect his chances of representing Canada at the 2022 Beijing Olympics. He’s been more than good enough to build on the attention he garnered at the IIHF Men’s World Championship last spring.

From skate to stick to the back of the net, Andrew Mangiapane (@andrewmange13) goes 🔝🧀. pic.twitter.com/4RSPUeqz6P

And who had Oliver Kylington leading the Flames defence in points even two months ago? His 12 points (3G, 9A) came after leapfrogging nearly half a dozen players in training camp to emerge as Calgary’s option to park beside Christopher Tanev in the Flames’ second pair.

Sprinkle in Milan Lucic. With even a fraction of selfishness, he’d be sitting at a 25-goal pace. Instead, the Flames will take a 20-goal projection out of the fan favourite who hasn’t been in that orbit since 2016-17.

Looch's snipe was nice you should see it twice. pic.twitter.com/tO4M9cYgJ6

Even mix in Erik Gudbranson, whose offseason signing might’ve elicited a groan or two from the fanbase. Gudbranson’s contributions don’t necessarily show on the board — he’s got four helpers in 20 games — but there’s no doubt who anchors the third pair in Calgary. He’s been on the ice for just six even-strength goals against while averaging 17:54 of ice time per game.