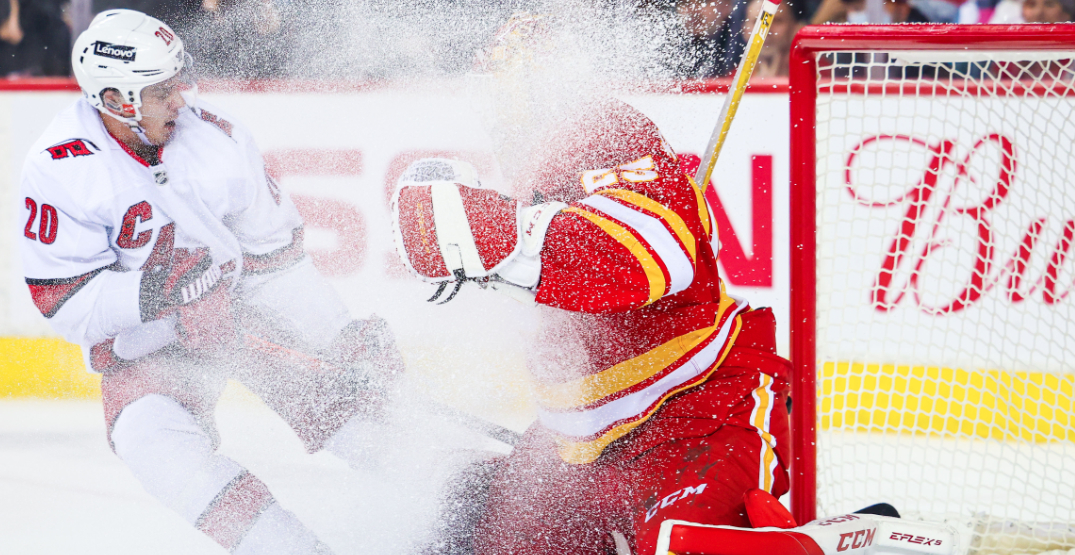 The Calgary Flames, by their own account, aren’t afraid to lose in overtime.

They just have been.

There’s no gripping of the sticks or tensing of the mind once the jumbotron flips from the third period to free hockey, the group with express.

But on the flip side, there aren’t a lot of positives to draw on with the first-place Flames posting a 1-6 record in games decided within the extra frame.

“That extra point is important and we’ve left a few on the table for sure in overtime,” Flames assistant coach Ryan Huska started Friday, some 14 hours after their latest extra-frame folly.

“It’s just making sure we’re ready for the shift that’s right in front of us.”

Only the flames can start OT with a power play and still end up losing.

Calgary has 13 shots on goal in overtime this season. They’ve surrendered 21, giving them a share in the NHL lead for worst differential.

Rarely are those offerings of the of the low-event type, either. The Flames have had two high-danger scoring chances for in three-on-three situations this season, and have surrendered nine — second-most in the NHL — according to Natural Stat Trick.

“Score before they score,” goalie Jacob Markstrom suggested after his group dropped a 2-1 overtime decision to the Carolina Hurricanes on Friday. “I think that’s huge. That’s the most important thing for our group.”

And it might be nitpicking a group that sits first in the Pacific Division and second in the Western Conference through the opening third of the season.

There’s no three-on-three in the playoffs either, so why the cause for concern?

Because Calgary would be clear division and conference leaders, well ahead of the pack, with just a few more of those accessible bonus bumps.

“It’s still points that we’re leaving on the table,” forward Blake Coleman started. “You win half of those and we’ve got a pretty good cushion right now. You need to find a way to win these games.

“Obviously we’ve done alright in shootouts but you don’t want to be waiting for a shootout. You’ve got to figure out ways to win in overtime. We’re getting our chances, but giving up some pretty Grade A opportunities and leaving Marky out to dry a little bit. We’ll address it as a team. It’s one of those things you can’t ignore it, but points are points and down the stretch you need every point you can get.”

We are the worst 3on3 overtime team to ever exist #Flames

The Flames have as many overtime points as regulation losses.

Not the worst way to be upended.

“Obviously you’re aiming for two, but if you’re going to lose, picking up points is obviously the way to go,” Coleman offered. “We’re playing a lot of close games. It’s going to happen. You’re going to end up on both ends of that.

But it is a bit of an oversimplification for a group that has been on the losing side much, much more than the winning end.

Yet the belief is still engrained it the group, it seems.

“Yeah, we’re 1-6, but I think there’s lots of chances we could finish off those games and I think we’ve got to do a better job there of finishing opportunities in overtime,” offered Andrew Mangiapane, who is averaging 48 seconds of ice time in the extra session this season. “Couple looks in previous games where you’ve just got to finish and bear down.

“I think that’s another key for us right there is just finishing opportunities.”

I remember when the flames used to be automatic in overtime, good times

The wins and losses, shots for and against, and chances each way paint a less favourable picture, though.

Mistakes have been made. They won’t argue that point.

A lack of finish is only part of the problem.

And while ‘loser points’ are still points, there’s still scraps being left on the table by a group that’s being outplayed in the extra session.

“Early in the year we were going for broke right away and we made some mistakes and we turned pucks over,” Huska explained. “In overtime that’s how you give up goals. It’s 2-on-1’s against off the rush where teams will cross and they’ll attack the forward if a forward’s back there. I thought we were a little bit too antsy or in too much of a hurry to get something done.

“Lately we’ve done a much better job of trying to hold onto the puck a little bit more and working together as three guys. When we get opportunities you have to bear down on your chances.

“That’s really what it comes down to.”