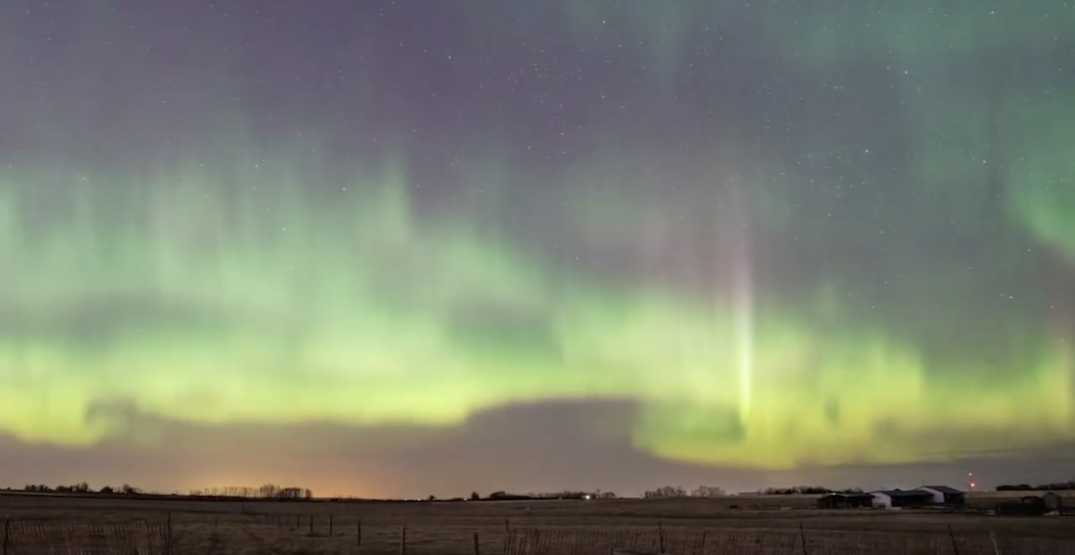 Those who were gazing upwards on Saturday morning may have been lucky enough to spot Northern Lights flashing across Alberta skies.

The Weather Network reported that the Northern Lights, or aurora borealis, made an appearance in parts of the prairies in the early hours of Saturday, March 20. An AuroraWatch red alert was in effect from 1:10 am until 7 am.

A red alert indicates that there is a very good chance of auroral activity, and hopeful Northern Lights viewers weren’t let down this weekend.

According to the Canadian Space Agency, auroras occur when charged particles collide with gases in Earth’s atmosphere.

These collisions produce tiny flashes that fill the sky with colourful light. The auroras appear to move and dance across the sky as billions of flashes occur one after another.

Feast your eyes on the kaleidoscopic skies of Delacour, Alberta✨ Painting the atmosphere with stunning, vibrant hues, the #NorthernLights made an epic appearance in parts of the prairies early Saturday morning. #AuroraBorealis #ABwx pic.twitter.com/riZHQv9BDD

The science behind the aurora borealis is cool, but we prefer to think of the Northern Lights as pure magic.

Did you catch nature’s enchanting light show this weekend?

Drumheller Sat at 4AM, joy to the world! #drumheller #alberta #auroras #alberta pic.twitter.com/ZZ95dksqOJ

Okay, does this look like a car with headlights to anyone else? No, just me? @AlbertaAurora #Aurora #Alberta pic.twitter.com/Jb7YXGfRnO

What started out as a it doesn’t look good for auroras kind of night really amped up after midnight when a G2 geomagnetic storm hit and the rest they say is lady aurora doing her thing. Photos taken between 1:00 and 4:00AM just north of Red Deer, Alberta. #ABStorm #StormHour pic.twitter.com/AkxGXaAsrJ

Heard Lady Aurora was out dancing tonight, so I left my warm bed to see what the fuss was all about.

Just me, some distant owls and coyotes, and some incredible northern lights. Stay tuned for video!#yyc @weathernetwork pic.twitter.com/naUpaoHxUF

Aurora woke me up in the middle of the night !! #finally #Auroraborealis #inmyneighbourhood #yeg #SaturdayMorning 💜💚 pic.twitter.com/uRMXxerN5w

can’t think of a better night to be kept awake by a head cold …
thank you Mother Nature ❤#LadyAurora#northernlights #Yeg pic.twitter.com/1zPfjKTcFL