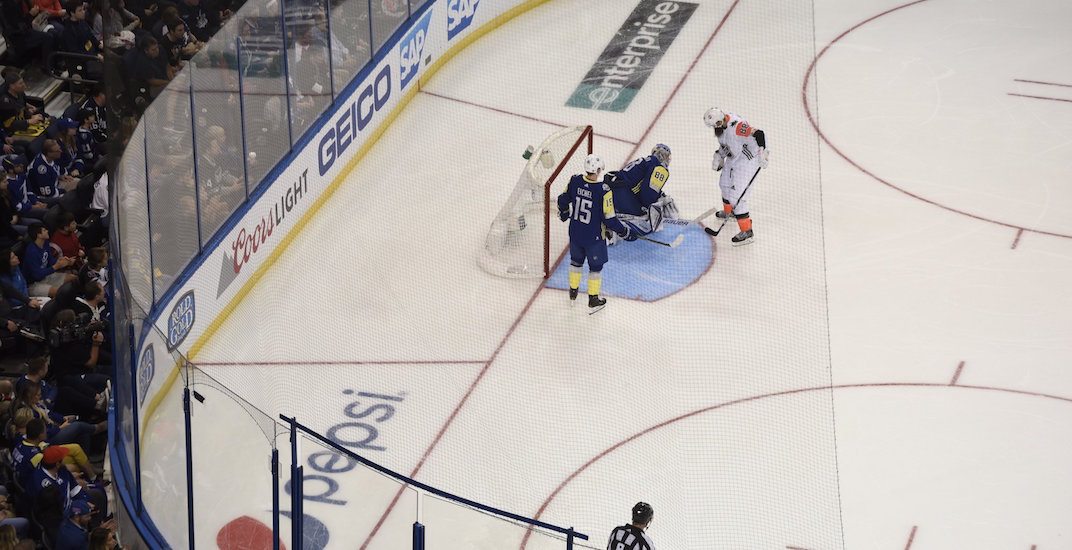 Across the NHL, teams are starting to reinstall ice at their home arenas in anticipation of the new season.

The NHL preseason kicks off in 18 days, beginning with the Calgary Flames and Boston Bruins in China. For the other 29 teams beginning play in North America, you might notice some changes to the ice surface.

In Montreal, they’ve moved to one logo at centre ice, replacing the twin Canadiens logos that had been present since they played at the Forum. In Detroit, they’ve removed “Hockeytown” from centre ice at the new Little Caesars Arena.

While The “Hockeytown” across center ice was cool and represented the great “4 Stanley Cup/25 year playoff run”, I never liked covering the @DetroitRedWings logo. Like the new clean look. pic.twitter.com/VVCjqlZIep

But a change that all 31 teams will see on their home ice is the presence of more ads.

Starting next season, teams will be permitted to sell advertising in four new locations, in the corners below the goal lines. It’s something that the league experimented with at the All-Star Game in January, as well as the China Games between the Vancouver Canucks and Los Angeles Kings in September.

The Philadelphia Flyers’ and Boston Bruins’ social media accounts showed off the instalment of each of their home ice recently, which illustrates the subtle change.

This is the first time the league has added ad space on the ice since the early 1990s, when teams began to be permitted painting four sponsor logos in the neutral zone. The new corner ads are allowed to be up to 44 square feet in size, smaller than the neutral zone logos, which can be up to 81 square feet.

Selling advertisements in the field of play first began in 1978, when the NHL began allowing advertising along the boards.

The NHL has still resisted the urge to sell ads on their jerseys, something that the NBA gave into last season and the CFL has allowed for years.

While the league should be weary about their ice surfaces looking like minor league rinks or ones in Europe, you can understand why a subtle ad addition was approved. The ice surface is prime real estate for advertisers. The new logos, while smaller than the ones at centre ice, will be shown more often on television – particularly during highlight shows.

It all ads up to more money for teams. So really, the only surprise with this story is that it took so long to be permitted.