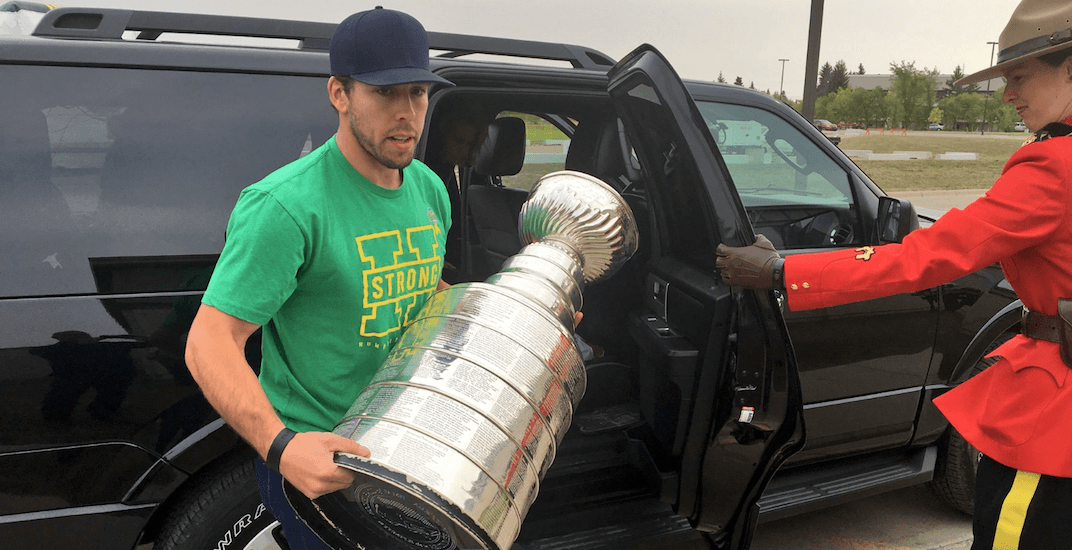 It’s “Hockey Day in Humboldt” and there’s no doubt what the main attraction is.

The Stanley Cup is visiting the small Saskatchewan community, as Washington Capitals forward Chandler Stephenson decided to bring it to Humboldt.

Stephenson, who is from nearby Saskatoon, got the Cup on Thursday and arrived in Humboldt on Friday.

Wearing a Humboldt Broncos t-shirt, Stephenson brought the Cup to the crash site, before arriving at the team’s home arena. Fans were lined up to see the trophy and meet Stephenson, which was available from noon to 1:30 pm.

The @NHL & @NHLPA are hosting Humboldt Hockey Day on Friday at the Elgar Petersen Unipiex. The event is primarily focused on the community, while showing support to the @HumboldtBroncos organization as the incoming team embarks on a new season. #HumboldtStrong

Helping escort some VIPs to Humboldt this morning. #HumboldtStrong pic.twitter.com/KlUJO2ifKv

Stirring show of support and love here in Humboldt today where the lineup to see the Cup and open camp wrapped around the entire arena, much like the nation wrapped its arms around this community. pic.twitter.com/LTwe10Thp6

The Cup stopped at the crash site on the way to Humboldt, and should arrive soon. There’s a big crowd #HumboldtStrong pic.twitter.com/MQTfR0mrIE

One of the permanent memorials at the Humboldt arena honouring the crash victims #HumboldtStrong pic.twitter.com/aY8qOdjMgU

A line is snaking around the Elgar Petersen Arena to see Chandler Stephenson and hockey’s holy grail. #HumboldtBroncos #HumboldtStrong pic.twitter.com/N5bJSoqFHp

We’re less than three weeks away from the Humboldt Broncos’ first game of the 2018-19 season, which promises to be one of the most emotional nights in hockey history.