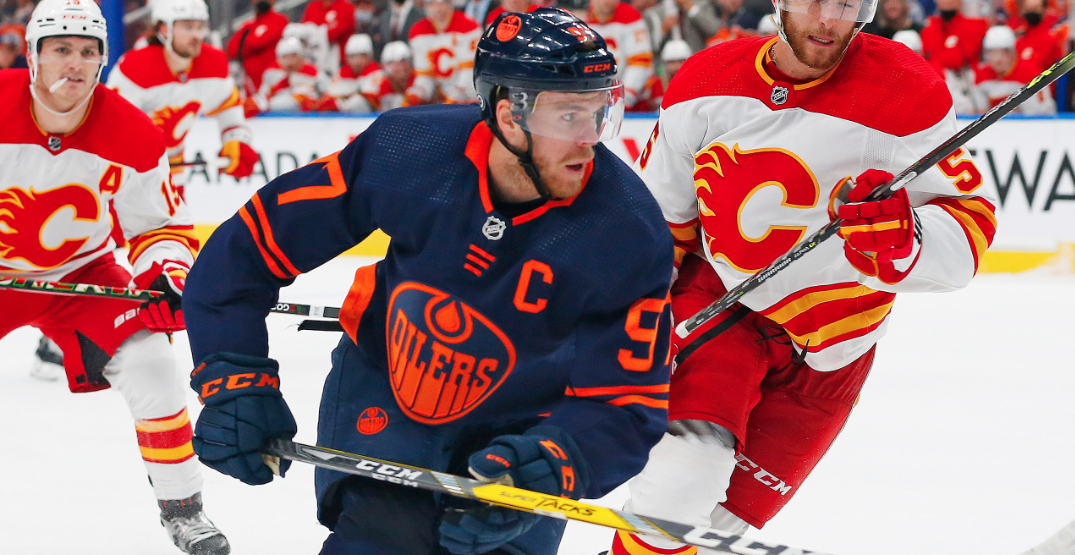 The Edmonton Oilers, to most pundits, neutral fans, and gambling lines, aren’t the likely victors in the first playoff Battle of Alberta series with the Calgary Flames in 31 years.

Connor McDavid isn’t so sure, though.

But then again, he’s not sure why it matters what others think, either.

“If we’re the underdog, great,” McDavid said. “We definitely believe in ourselves, believe in our group and it doesn’t really matter what the fans or the media have to say.”

Edmonton enters the best-of-7 series having taken seven games to dispatch the Los Angeles Kings in the opening round. Calgary will play host, having netted the best regular-season record in the Pacific Division and advancing into the second round after going the distance against the Dallas Stars in the first round.

The Flames finished just seven points ahead of the Oilers through the regular 82-game slate, and the two teams split the season series with two wins and two losses apiece.

Further, the top two teams in the entire NHL from the All-Star Break on were the two set for the QEII battle, with Calgary netting 59 points in 40 games and Edmonton collecting 55 in the same span.

But betting lines seem to suggest there’s a bigger gap between the two teams.

“Yeah, we’re the underdog. Edmonton’s saying they’re the underdog. I love that stuff. I think the best part is you talk about the underdogs, well, quite honestly in July and August and September, the Flames were sixth or seventh in their division and then in December, January that’s Edmonton, that’s what everyone was saying about Edmonton and now they’re both in the second round.

“So it just tells you that the white noise and bullshit is just that.”

To put it more mildly, the gap is more a sliver than a canyon.

Both have had their downs in a season to prove that.

But each team has also had some significant ups that have led them to face each other in the playoffs for just the seventh time ever.

“We’ve known throughout the years our resilience, our never-giving-up kind of attitude,” Oilers forward Ryan Nugent-Hopkins said. “Obviously you’re down 3-2 on the road, it’s a tough situation to be in and the way that we played that game and brought that same energy back to Edmonton I thought was really good for our squad.

“We went through some adversity like every other team this year and we’ve battled through so it’s something that we’ve known throughout the year but when you can bear down and get it done at the important times, it says a lot about your group.”

That group, of course, was the second-best team in the Pacific.

On the other side is a Vezina Trophy finalist in goalie Jacob Markstrom, a Selke nominee in centre Elias lindholm, and the NHL’s second-leading scorer in Johnny Gaudreau.

Friends will turn foes, too, as former Oilers forward Milan Lucic will suit up for the Flames. Ditto for a quad from Edmonton, with goalie Mike Smith, forward Derek Ryan, and defencemen Kris Russell and Brett Kulak starting the Battle of Alberta from the other side.

Plenty of storylines, both with and without the provincial rivalry.

Plenty of folks, from Wayne Gretzky to Drew Doughty and beyond, have already weighed in.

But a Rocky or Rudy-like uphill battle for one team, and assured victory for the other.

“This is a playoff series and obviously it’s one that’s going to get a lot of interest from fans and media and whatnot, but for us, it’s a playoff series,” McDavid said. “We’ve got to find a way to win and it doesn’t really matter who we’re playing. So it’s fun that it is the Battle of Alberta and it’s Edmonton-Calgary.

“It hasn’t happened in a long time and to be part of the first one in a while is exciting but ultimately it’s a playoff series and we have to go about our business.”