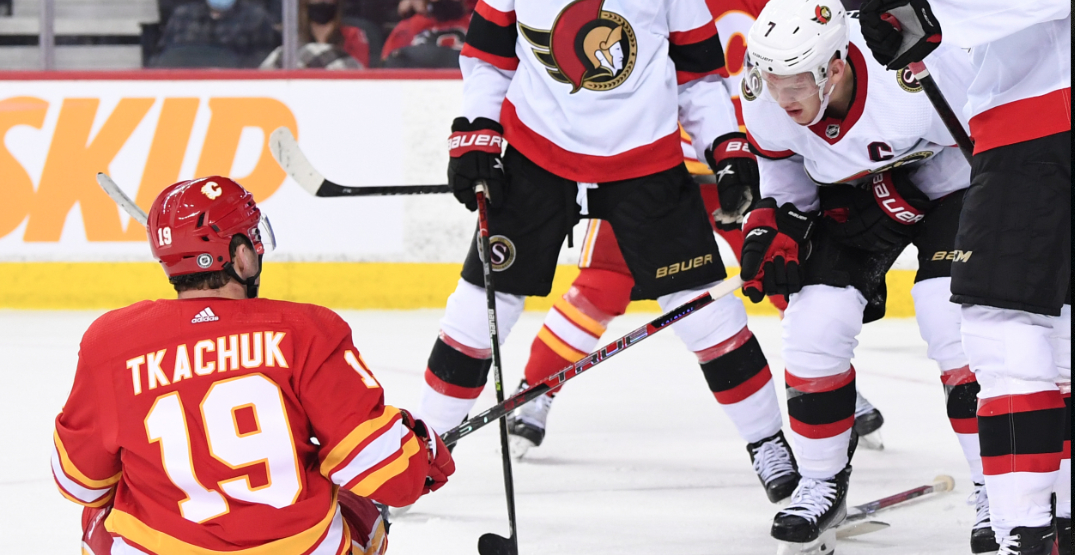 Matthew Tkachuk and the Calgary Flames lost the war, but he might’ve won the battle with Brady Tkachuk.

Whether it was intentional or not.

In the late stages of the Flames’ 4-1 loss to the Ottawa Senators, Brady gave big brother Matthew a shove, knocking his older brother down. Matthew, from the seat of his pants, responded by catching Brady in a sensitive area with what was likely an “accidentally-on-purpose” one-handed slash downstairs.

All with mom watching at home.

Chances are it didn’t surprise her.

Battle Of The Brothers.

In 14 meetings against one another, each team has won 7 games – who is taking the tonight's tie-breaker? pic.twitter.com/oTijek02BS

“Matthew tormented Brady forever, and once Matthew probably hit about 16 or 17, he realized that he couldn’t really do that anymore because Brady was getting bigger and stronger and a lot more feisty,” Chantal Tkachuk said on Boomer in the Morning on Sportsnet 960 on Thursday morning.

“They still wrestle. It’s ridiculous. They come home and wrestle and have fun with each other. Definitely there’s a little bit of fear now that Brady has gotten bigger and stronger.”

Chantal had actually intended to be in attendance at the Saddledome for the bout between the brothers, but restrictions and travel requirements squashed it.

The shenanigans probably didn’t shock her.

Chantal clearly had a front-row seat to the sibling rivalry for 22 years.

“I mean, they’re 21 months apart and they’ve grown up doing everything together,” she said. “You don’t sort of mention one of their names without the other. Usually it’s good-cop, bad-cop,

“But any given day that can change.”

It is worth noting that Matthew, who has had 32 points (16 goals, 16 assists) in 34 games this season, one-upped his brother on the scoresheet, scoring Calgary’s lone goal in the affair.

Brady, who had an assist in the tilt to push his season total to 23 points (12 goals, 11 assists) in 27 games this season, had to settle for the win.