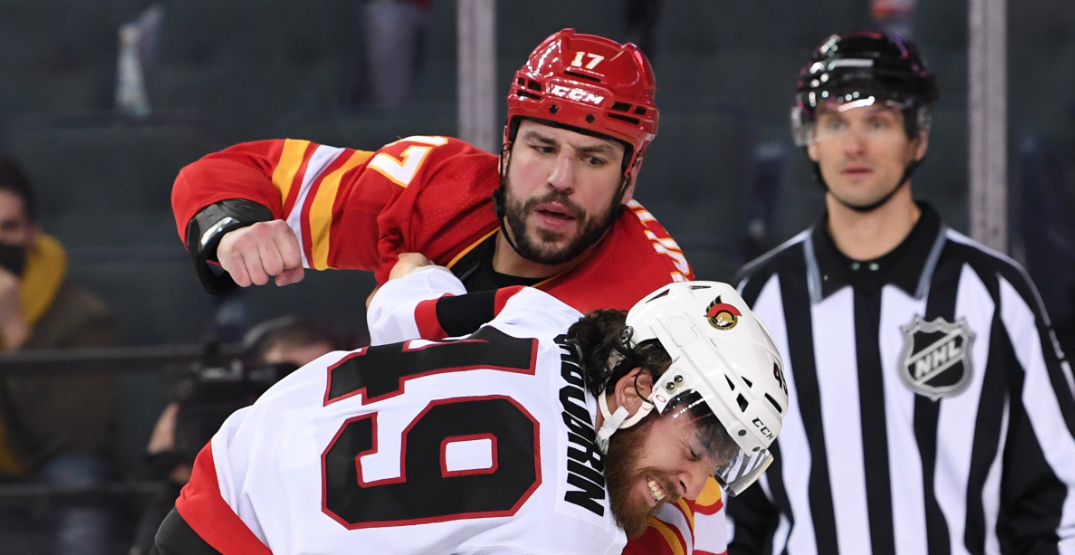 He owed Milan Lucic one. And Scott Sabourin obliged.

With the Calgary Flames slumping midway through a 4-1 loss against the Ottawa Senators last night, Lucic tapped Sabourin for what he hoped would be a game-changing, tide-tilting rouse.

“Well, I think all different players have all kinds of different skill sets to provide emotion to the team, whether it’s a hit, getting in on the forecheck, having an o-zone shift, making a big play, blocking a shot, big save. Any one of those things,” Lucic said after the loss.

“Different guys got different ways of showing emotion, and it just seems like ever since we’ve come back these last six games, it hasn’t been there consistently enough. That’s something we’re going to have to find again. It’s up to us as a group to do that together.”

It didn’t change the tide, but that didn’t diminish the haymakers Lucic landed in trying to spark the listless Flames.

Give ya one guess. @Sportsnet pic.twitter.com/EJAlk9xALi

“I think the emotional level of our group has been lacking for a period of time now,” Calgary coach Darryl Sutter said postgame. “I think Looch, I think he recognized that and tried to grab onto it tonight. There has to be a lot more out of the whole group in terms of that.”

Not the ideal time if you’re the Senators.

But part of the code.

As it turns out, Sabourin owed Lucic one.

“That takes big guts. Looch is one of the toughest guys in the league,” Ottawa coach DJ Smith said. “At the time, you’ve got a 2-0 lead, and you’re thinking to yourself that’s not a perfect scenario, but it’s really gutsy by him.

“A year ago, Looch gave him a shot in Toronto, and I think that’s a little bit of a code by those guys. I think that’s what happened. It was good that our guys kept their focus, didn’t let that spark them, and our guys did a nice job.”