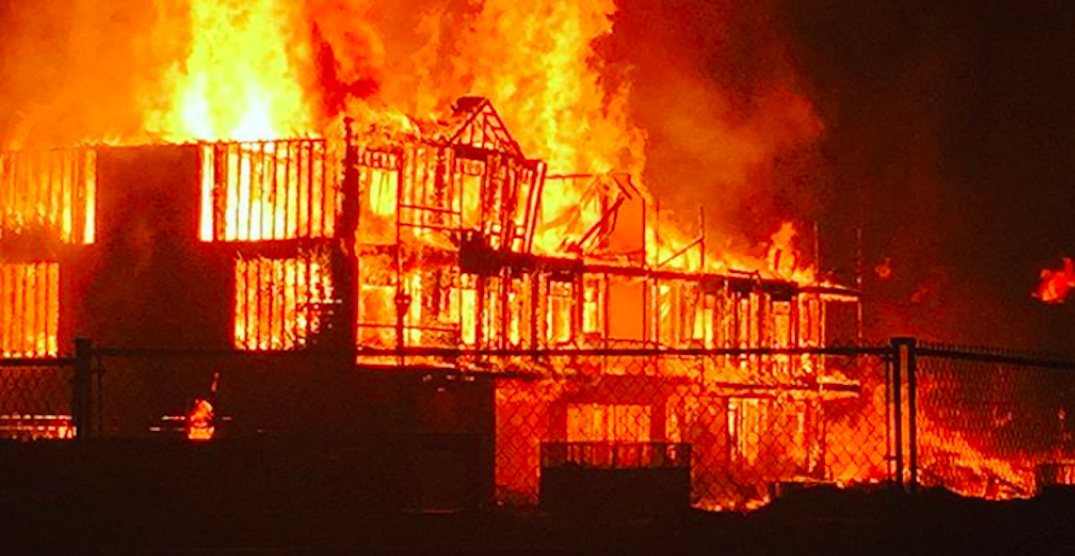 Fire crews were on the scene of a massive inferno this morning, as multiple building went up in smoke in Cochrane.

The Cochrane Fire Department was first called at 2:18 am, with the second alarm ringing in at 2:20 am, and both the fire chief and deputy fire chief were called and on the scene by 2:36 am.

According to an interview with Cochrane Fire Chief David Humphrey, the fire burned through more than a dozen buildings in the Fireside of Cochrane neighbourhood, located just south of downtown Cochrane.

“If you counted suites affected, our total is at 62 suites, but in that, they’re at all different levels [of damage] from blemishes on the vinyl siding to completely destroyed facilities,” Humphrey said in a phone interview with Daily Hive.

Two firefighters received minor injuries but continued to battle the blaze into the morning. Humphrey said that the site is now secure, and insurance companies are at the site to assess the damage.

“Its one of the bigger fires we’ve had in Cochrane,” Humphrey said.

“We haven’t had one of this magnitude for some time and in recent history, I’d say its one of the largest ones we’ve had.”

He said that it will be a number of days before the cause of the fire is determined, but that the fire department currently has investigators on scene.

Heard some explosions. Totally crazy to look out the window and across the street to see this! I hope everyone is ok.

Big fire in Cochrane in the neighbourhood of Fireside. from r/Calgary