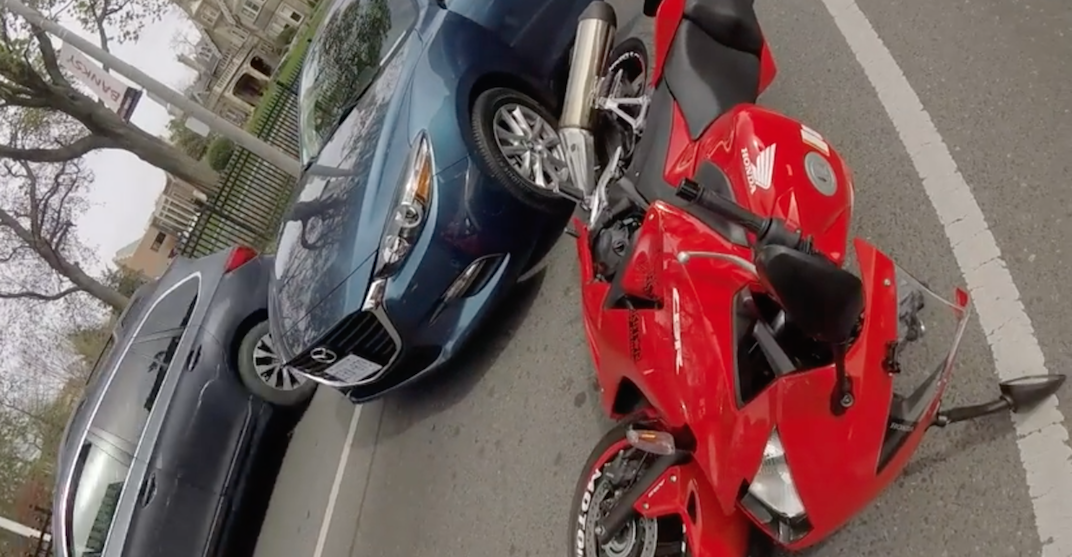 A video circulating the internet shows the effects of distracted driving after a motorcyclist has a close call with a driver on her phone.

Toronto’s Billy MacLellan was driving through the city on his motorcycle last month when he was hit by a driver who was distracted by her phone.

MacLellan happened to be wearing a GoPro, which captured the entire incident.

In the GoPro footage, you can see MacLellan’s motorcycle knocked over on the pavement and the woman’s car stopped beside him.

Luckily, he wasn’t hurt and the driver swore on her life she would never text and drive again.

After exchanging information with the woman, 9-1-1 told them they had to report the accident at a collision centre. The driver told MacLellan she didn’t want to tell police at the collision centre that she was “putting her phone down.”

After leaving the scene of the accident, MacLellan happened to catch up with the driver and couldn’t believe what he saw.

As he drove past her vehicle, he saw that she was on her phone again, clearly unphased by the close call that happened mere moments before.

Once the woman noticed he was beside her, she stuck her head out of her car window to apologize again.

Following the incident, MacLellan posted the footage on Facebook, and it’s already been viewed over 75,000 times.

In the video, MacLellan says the driver never showed at the collision centre and after sharing the GoPro footage of the distracted driver with everyone from Toronto Police to the Mayor’s office, “no one seems to care.”