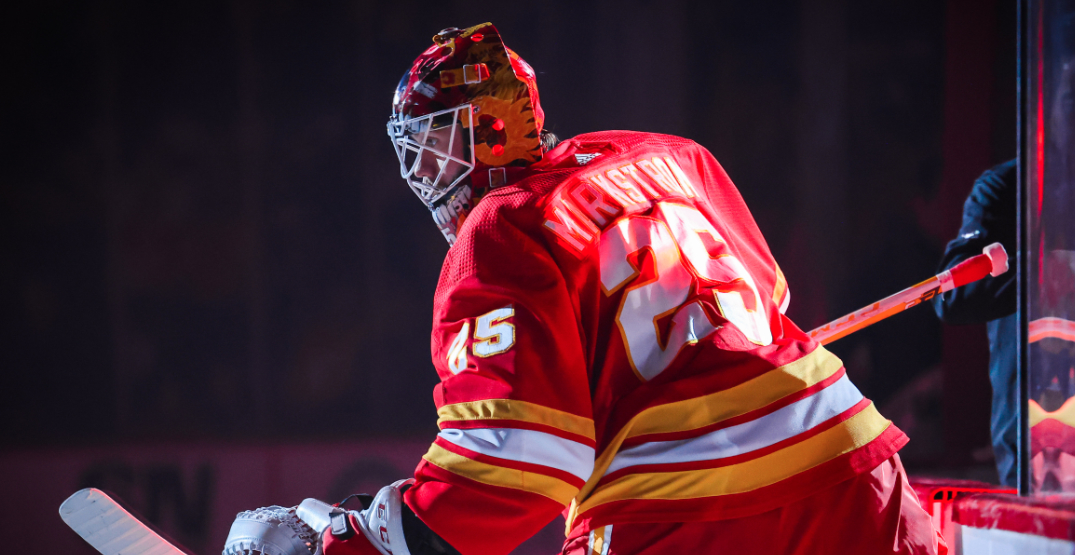 Jacob Markstrom, by way of a light workload, is coming into the Stanley Cup Playoffs well-rested.

And, if the Calgary Flames goaltender is to be believed, Game 1 against the Dallas Stars on Tuesday will be no different.

Because he had no issues getting a good night’s sleep on the eve of what, to date, could be a defining moment in his Flames tenure.

“I fall asleep pretty quick,” Markstrom said, and perhaps projected, Monday. “When my head hits the pillow I’ll be out in a couple minutes. I don’t try to overthink stuff.

“Have a great sleep and be ready for practice and then the game.”

Not much divergence for most of the season from the goaltender who finished fourth in wins (37), seventh in saves (1,617), and third in goals-against average (2.22) and save percentage (.922).

And he’ll project that confidence through the guys in front of him.

“I’ve said it for a long time now…if he’s not the best, he’s one of the top two, top three goalies in the league,” longtime teammate Chris Tanev said, who also shared a locker room with the wall-like netminder during their tenures with the Vancouver Canucks. “I’ve played with him a long time. I love playing with him. I love communicating with him.

“He’s as good as it gets, and he’s only going to get better for us.”

It’s a theme echoed through the locker room.

“He’s been playing unreal for us all season,” forward Elias Lindholm said. “We expect the same tomorrow as he’s been doing since he came here. He’s been awesome. He’s been a good guy and a good player and a good teammate. It’s just fun to have a goalie like that behind you.”

As good as he’s been in the regular season, both historically and this season, Markstrom’s relatively untested in the playoffs. He’s got 14 playoff starts to his credit — all in 2020 with the Canucks.

He went 8-6-0 with a 2.85 goals-against average and .919 save percentage before bowing out because of injury.

“Marky was awesome for us,” Tanev said. “He made tons of big saves at the right moments. Unfortunately, he got dinged up against Vegas, but up until that point he was great for us and one of the big reasons why we were able to make it that far.”

It sticks with the netminder.

“We didn’t win, so it wasn’t that successful,” said Markstrom, who enters well-rested after playing just one of four games to close out the regular season. “It’s more of a sour taste with last year and you don’t know when you’re going to get the next chance at this. It’s not easy to get into the playoffs. Now it’s here, and you’ve got to make the best of it and put absolutely everything you’ve got into it…preparation and everything else that comes with it.”

His task is simple. Be better than the 23-year-old at the opposite end of the rink.

Markstrom is playing opposite Jake Oettinger, who, in 46 stats, netted 30 wins and posted marks of a 2.53 goals-against average and .914 save percentage.

“You have to stop the puck and be better than the other goalie out there,” Markstrom said. “It’s going to be tough and it’s going to be a battle. In the playoffs, everything gets ramped up a little bit with shots and traffic and people in front of the net and all that.

“You just got to keep playing your game and stay calm and then stop as many pucks as you can.”

“I think Marky’s Marky,” Tanev said. “He’s going to be what he’s going to do. We’re going to rally behind him. He’s a good leader, great teammate, great goalie.

“I don’t expect anything different [Tuesday].”