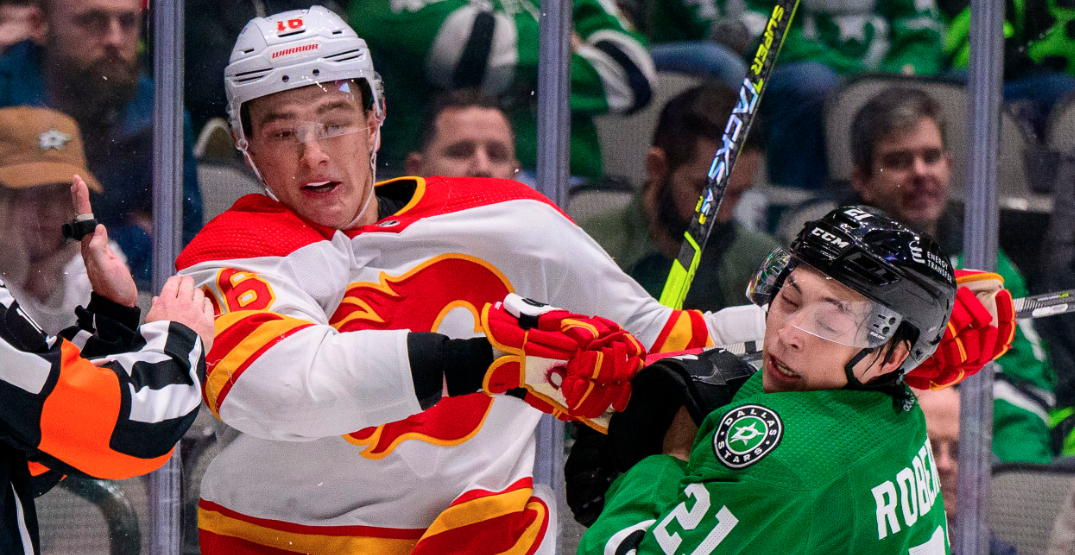 The Calgary Flames have their dates.

And who they’ll dance with.

In perhaps a surprising development, the Flames will open the 2022 Stanley Cup Playoffs against the Dallas Stars next week after the Stars secured the first wild card into the playoffs from the Western Conference in a dramatic fashion.

Dallas needed to win their game against the Anaheim Ducks in regulation on Thursday, and did so after the Ducks needed the help of an emergency back-up goalie when starter John Gibson and backup Anthony Stolarz left the game with injuries. The Stars won 4-2, with the game-winner scored on Thomas Hodges, the replacement.

Dallas also needed the Nashville Predators to lose in regulation. Not only did that happen, but the Predators blew a 4-0 lead to fall 5-4 against the 31st-place Arizona Coyotes in one of the season’s biggest collapses.

Dallas entered the day with a 12.9% likelihood of playing Calgary.

The wild finish set up the collision course with the Flames.

Dallas won just one of three meetings against Calgary this season, a 4-3 overtime victory at Calgary on November 4. They lost twice in regulation, including 4-3 on February 1 and, more recently, 4-2 at the Saddledome on April 21.

The Flames, perhaps shockingly given the fact they had three 40-goal scorers and two 100-point players, were paced by defenceman Rasmus Andersson in clashes with the Stars this season. Andersson, who himself cracked 50 points, led the way with four assists. Andrew Mangiapane and Matthew Tkachuk each had two goals and one assist in the three-game set.

Like Calgary, Dallas was backed by a blueliner as their leading scorer in the season series. Miro Heiskanen also had four points — all assists — in three games. It should come as no surprise that 41-goal scorer Jason Robertson shared team-lead in goals with two alongside longtime Flames foe Jamie Benn.

Up front, the Flames fare well. Tkachuk and Gaudreau each finished in the top-six in NHL scoring, and four members — Tkachuk (42), Elias Lindholm (42), Gaudreau (40), and Mangiapane (35) each scored 35 goals or more. Additionally, 10 skaters had 30 or more points this season.

Dallas had nine skaters with 30 or more points, including two point-per-game players in leading scorer Joe Pavelski (27 goals, 54 points in 82 games) and Robertson (41 goals, 38 assists in 74 games). Robertson and Roope Hintz (37) were the only two to crack the 35-goal mark. In fact, only four skaters had more than 18 on the season.

In the special teams’ battle, it couldn’t have been closer in the season series. In fact, it was exact.

Each team was identical on special teams unit, with each side drawing 11 penalties and scoring on two opportunities. The average, 81.8% on the penalty kill, was slightly below Calgary’s average on the season at 83.2%, and above Dallas’ 79.0% kill rate. The Flames power play functioned better as a whole across the 82-game schedule too, at 22.9%. The Stars, meanwhile, were just behind the Flames at 22.4%.

On the miscellaneous front, Dallas was actually the more physical team with 1,850 hits thrown. Calgary, by comparison, was 20th in the league with 1,836. The Stars were also ninth in the league in blocked shots with 1,170. The Flames were 30th at 955.

Calgary, who regularly outshot opponents, registered a 55.6% shot attempts percentage — third-best in the NHL. Dallas was 19th at 49.0%.

The Stars were also the only team in the Stanley Cup Playoffs to be outscored this season, posting a -8 differential after giving up 246 goals against. They scored 238 goals on the season, the lowest figure among all teams to qualify. Conversely, Calgary surrendered 208 goals — the fewest in the Western Conference and second-lowest total league-wide.

How these numbers trend in the playoffs will be interesting.

So too, will MoneyPuck‘s early-series prediction. The popular analytics site heavily favours the Flames heading into Game 1, scheduled for Tuesday at the Saddledome.

The Flames have an incredible 80.6% chance of advancing to the second round of the playoffs and an eventual date with the winner of the Edmonton Oilers and Los Angeles Kings Pacific Division battle. It’s the largest projected margin among the NHL’s eight playoff series, according to the site.

The games, though, aren’t played on paper.

So let’s drop the puck.