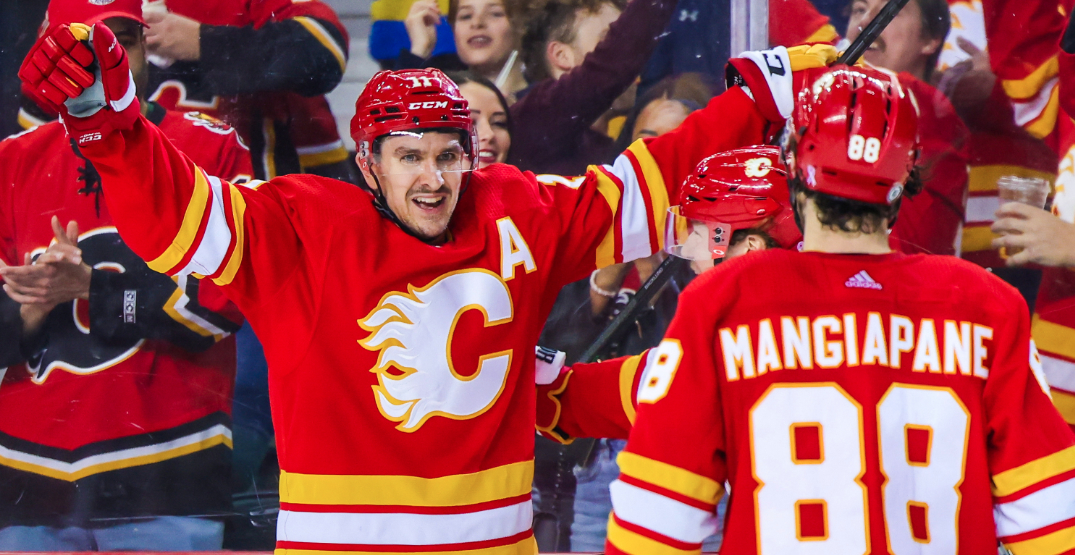 You’ve most certainly heard them.

Chances are, a couple times a night with the way the Calgary Flames have been playing this season.

The familiar “TNT” by AC/DC lighting up the speakers at Scotiabank Saddledome after the home team finds the back of the net, prompting a sudden rise, hi-fives, and hugs from the Flames faithful.

But wait. What’s the song interrupting the legendary riff and the ‘Oi, oi, oi’ chant?

That’s the custom goal-scorer’s song prematurely ending the traditional goal song of the Flames, spinning off into a new direction to highlight the identity of the twine denter.

Yes, the Flames have custom goal songs for select scorers — 11 in all this season.

Which begs a backup question: who has the best anthem?

Each song was graded on a 1-5 scale for overall likability, general relevance to the player, it’s ability to pump-up a crowd, and it’s recognizability to the general population.

In the interest of fairness, neither the frequency the song is heard, nor the popularity of the player, is taken into account.

Here is the undisputed, uncontested, infallible order of which songs are the best.

Though it won’t be heard the rest of the season with Sean Monahan out for the year with another season-ending hip surgery, he can take solace in knowing he has the undisputed best goal song on the club. Not only is “Mony Mony” by Billy Idol an absolute smash hit — the original reached No. 1 on the UK singles chart and No. 3 in the United States in 1968 and Idol’s cover went to No. 7 on the Billboard dance chart in 1981 — it perfectly encapsulates what an add-on goal song should be.

It’s instantly recognizable, meaning the crowd can sing along. Its got punch, giving said crowd a rise. It’s connected almost infallibly to Monahan’s name. And there’s not a single person, in their head, that doesn’t add the ‘special extra lyrics’ when it hits the Saddledome speakers.

Fitting that the longtime combination of Monahan and Johnny Gaudreau should find themselves 1-2 on the list after spending a half-decade together atop the scoring charts. The guitar riff itself is iconic, though that part gets skipped over on the heels of the Flames goal song. Regardless, the ‘Go Johnny go, go’ medley is equally as heart-thumping and fist-pumping.

We're running out of ways to describe how awesome Johnny is. pic.twitter.com/x2bSQo46In

The track, by the legendary Chuck Berry, peaked at number two on Billboard magazine’s Hot R&B Sides chart and number eight on its Hot 100 chart in 1958 but is still closing in on 299.5 million spins on Spotify. The only knock as a goal song is this: if a fan is getting jazzed over the song, it’s because of Gaudreau’s influence — not the song itself.

3. “Everybody (Backstreets Back)” by The Backstreet Boys (Mikael Backlund)

Age. Gender. Any demographic really. It doesn’t matter. Once “Everybody” by the Backstreet Boys hits, there’s an understanding of what’s coming next. The ‘freshest’ track among all Flames goal scorers — it was their first single from their second international studio album Backstreet’s Back in June 1997 — the recognizability of the instrumental hook is second-to-none on the list. The sheer contrast to AC/DC’s “Oi, oi, oi” makes the track slap even harder when it hits, too.

Oliver Backlund, getting a goal for his birthday from Dad. pic.twitter.com/IV4uDZjmTT

Perhaps the only thing limiting Mikael Backlund’s anthem is the fact that it doesn’t 100% seamlessly tie into his namesake. It’s close, but that fraction locks it into a second-place tie with Gaudreau’s ditty. It’s game over if Backlund ever executes the dance as a goal celebration.

On its own, “I can’t Drive 55” is a classic. The track, No. 100 on VH1’s 100 Greatest Hard Rock Songs, is a perfectly adequate mid-1980s rock song by the one-time Van Halen frontman. It doesn’t quite hit the same note as a goal song for defenceman Noah Hanifin. The tie is obvious — Hanifin sports No. 55 on his back — but that’s about where the mesh ends in that Hagar ‘can’t’ drive 55, but Hanifin can surely sport it.

The fact that this gem doesn’t even register within the top five Sammy Hagar hits is a travesty, and a testament, to the classic rockstar, but that’s neither here nor there. The song itself, as it pertains to a goal anthem, is close to having all the required elements to be a top contender, but there’s a certain je ne sais quoi that keeps it from being a can’t-miss.

Rock, meet Stone. As natural a marriage as there is on the list, Michael Stone’s anthem fits the rugged rearguard like a (hockey) glove. Its immediately recognizable once it hits the ears — at least to the over 40 crowd, anyway — and is a generally likeable tune, if nothing else. But about the only place the Bob Seger hit is going to raise people out of their seats is at a Bob Seger concert.

The single did peak at No. 1 on the US Billboard Mainstream Rock Tracks, after all. But it’s also forever linked to a Chevrolet marketing campaign that spanned over a decade, too, making it more commercial than enjoyable, to its detriment. Good song. Classic artist. Critically acclaimed, at one point. But lacking punch, no fault of Stone’s.

This one works on so many levels that it should’ve cracked the top-five, but somehow misses out. Instead, the theme from the Child’s Play movie will have to settle for an honourable mention. The fact that the spelling of Matthew Tkachuk’s last name differs from the song is one strike. The second miss is that it’s not an entirely recognizable song untill you fire up the Google machine — unless one happens to be a 1980s horror buff.

The fact that the antagonist of that movie is a possessed ‘Good Guy’ doll is the chef’s kiss for the goal song of a player frequently referred to by the Flames’ social media team as an ‘angel‘ is just the icing on the cake. So close, but yet so far.

Here’s a full rundown of the current song list for Flames skaters: