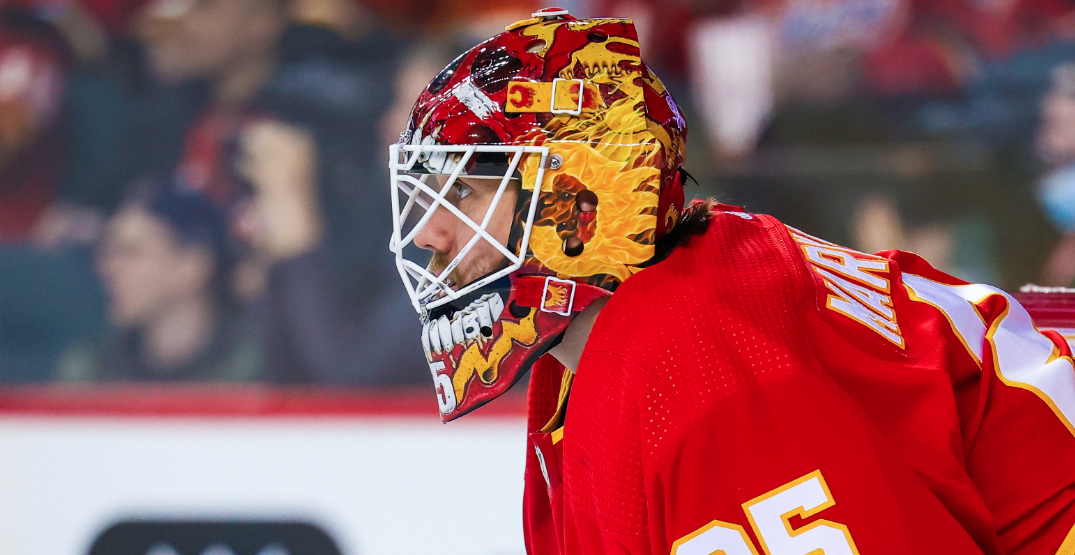 Not a whole lot of responsibility for Jacob Markstrom left at this point after turning in a 37-win, nine-shutout campaign to help the Calgary Flames hoist themselves back into the Stanley Cup Playoffs with a Pacific Division-winning effort.

That’s not to say his regular season is over. But the heavy lifting is done.

All that’s left is management down the stretch.

“You want to manage Marky right, that’s for sure,” Flames skipper Darryl Sutter said Friday. “The big thing there is you want him sharp. The worst thing you can do is give goalies too much time off. It’s the worst thing.

“I’ve already talked to him lots about it. Communication’s important. He’s a good pro, so he knows how the engine feels. I know what he looks like. You get a good read on guys. You know his personality. And go from there.”

Right on schedule for Sutter.

“If you do the research on it, it holds true. At the end of the day if you do it, the top-10 goalies, the guys on the first page of the goals against, there’s a minutes thing in there. There’s nothing to do with games. Teams will hold them to that, and they’ll make sure.

“If Markstrom would’ve played every game that I wanted him to, he would miss that mark by 21 minutes on the season, when you think about it. So he’s going to fall a little bit under that because we’re probably going to hold him out one more. That’s how the season played out. When you consider COVID and cancellations, that’s pretty close.”

There’s not a whole lot of concern in Calgary’s camp that Markstrom has been overused.

Backup Dan Vladar has 16 starts on the season and has come on in relief in multiple situations to both spark the Flames and help manage Markstrom’s workload.

The fact the team’s schedule was fractured earlier this season allowed for some additional rest, as did the NHL All-Star break.

“You look at it for the season, with COVID he had 17 days between games,” Sutter said. “Between a Florida game and an Ottawa game, he had eight or nine days off, and the All-Star break he had seven days off.

“He’s had significant breaks in the schedule. So the key there is not that you gave him a break. The key is was he sharp coming back? The next week you have to manage that properly, because if he only plays one game in the next two weeks, is he going to be sharp? I went both ways with that. I’ve seen it.”

Sutter will be in management mode Saturday, parking Markstrom in the press box after the team airlifted prospect Dustin Wolf in from Stockton of the American Hockey League.

It’ll give his starter, who boasts a 2.21 goals-against average and .922 save percentage, a true full day off, with more likely to come.

“There’s four or five days between games, from his last start to his next one. So makes sense,” Sutter said Saturday.

That leaves three games, including a back-to-back set to close out the regular season at the Minnesota Wild on Thursday and Winnipeg Jets on Friday.

Chances are Markstrom will take a seat for one of those, too.

“Because the teams are so close once you’re in.”