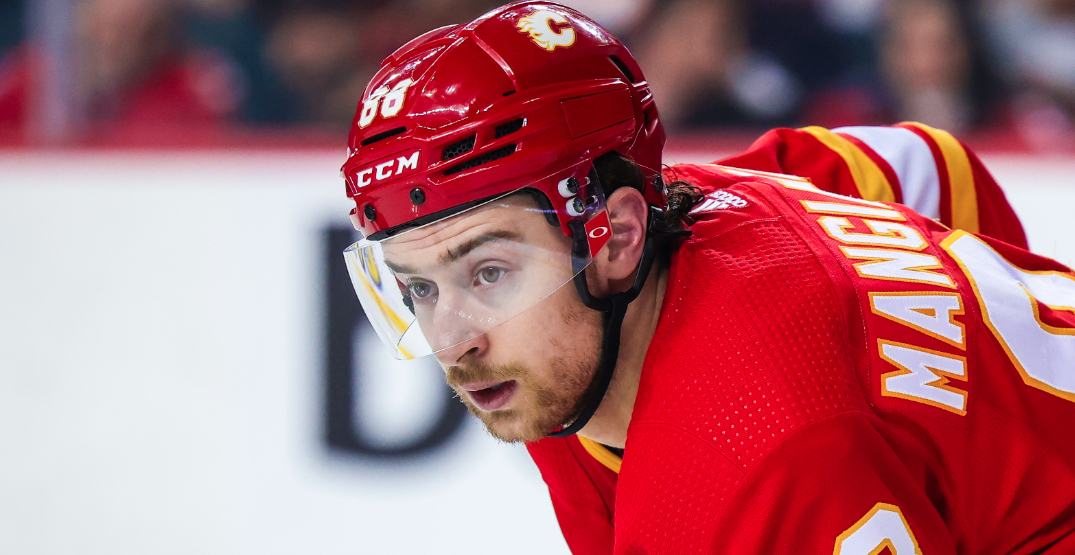 Andrew Mangiapane is more than comfortable in staying with the Calgary Flames on a long-term deal.

Ritch Winter, Mangiapane’s agent, said as much in a conversation with Eric Francis on Sportsnet 960 on Monday, indicating his client has a proposal on the table with the Flames that would keep him in Calgary for the foreseeable future.

“I think ultimately to admit that Andrew has submitted a proposal to them on a multi-year deal tells you he’s quite interested in staying here despite the uncertainty that surrounds Matthew Tkachuk,” Winter said on The Eric Francis Show.

“Certainly Andrew feels very comfortable with the coaching staff. He likes the management team here. He likes the city. He’s had a good experience. He’s said to them he’s quite willing to stay on a longer-term deal. Obviously, the dynamics have to be worked out in terms of finances and things, but he’s certainly accepted and proposed that he stay here longer term.”

Andrew Mangiapane has expressed to the #Flames an interest in signing a longer term deal. His agent, Ritch Winter, will join me on the EF Show at 12 MT to discuss that & many other issues like Johnny & what Canadian teams can do to be more attractive destinations.@Sportsnet960

Mangiapane, who scored an NHL career-high 35 goals in 2021-22 and is coming off a two-year bridge deal with $2.425 million per season, is one of three key remaining restricted free agents for the Flames to sign.

Tkachuk is also a significant priority for the club after the team lost Johnny Gaudreau to the Columbus Blue Jackets via free agency. Speculation has followed after Gaudreau’s departure that Tkachuk, who can accept his qualifying offer of $9 million and become an unrestricted free agent next summer, will do the same.

“Regardless of what happens, Matthew Tkachuk will be replaced by someone in a trade. You may not get a Matthew Tkachuk type, but you might get an Alex DeBrincat type. I don’t think, if Tkachuk is moved, they go from Tkachuk to nobody,” Winter told Francis.

“He would hope the moves the management team makes in the next month or two or three are exactly the kind of moves that encourages him to sign for longer. He has not shut the door on that. That discussion will continue.”

A long-term commitment comes at an interesting time for Mangiapane.

The 26-year-old, who was selected in the sixth round (No. 166) of the 2015 NHL Draft, is coming off a career year and, like Tkachuk, could sign a one-season pact and test the open market next summer.

Mangiapane would have no shortage of suitors if he chose that route and was able to replicate his scoring pace from a year ago, according to Winter.

“I think it’s an interesting time with the flat cap, so I think I personally am a risk-taker, so I always like the idea of betting on myself and taking the spoils that will come from that. That advice comes with some risk,” Winter started.

“It’s at least in the seven (million dollar) range. Could it be in the eight range? Potentially. If he gets 40 or 45 it could climb to who knows where. That might be the value teams place on him, but who has the cap room? Who has the right cap room and the most attractive compliment of players to play with, and which team is in the city that brings a lifestyle that everyone involved with the player, in and around his family, finds appealing.”

Mangiapane, who along with fellow restricted free agents Oliver Kylington and Matthew Phillips elected to file for arbitration on Sunday, managed his production while averaging 15:44 per game — 12th most on the team and fifth among forwards.

That responsibility will only spike in Gaudreau’s absence.

But in the end, not everything will come down to cash on Mangiapane’s next pact.

“Andrew, I can tell you, his objective is to score 40, 45 goals this year,” Winter said. “He believes it’s something that should be expected of him with more opportunity.

“The other thing that comes into play is injury. Short-term injury is not too big a deal if he’s on pace to get 40 and he only scores 32 in 60 games, but you always have to face the risk of a career-ending injury. Smaller player, plays a pretty aggressive game for a guy his size. What are the risks there?

“It’s a lot of money, but in the end, it probably won’t end up being the primary driver.”