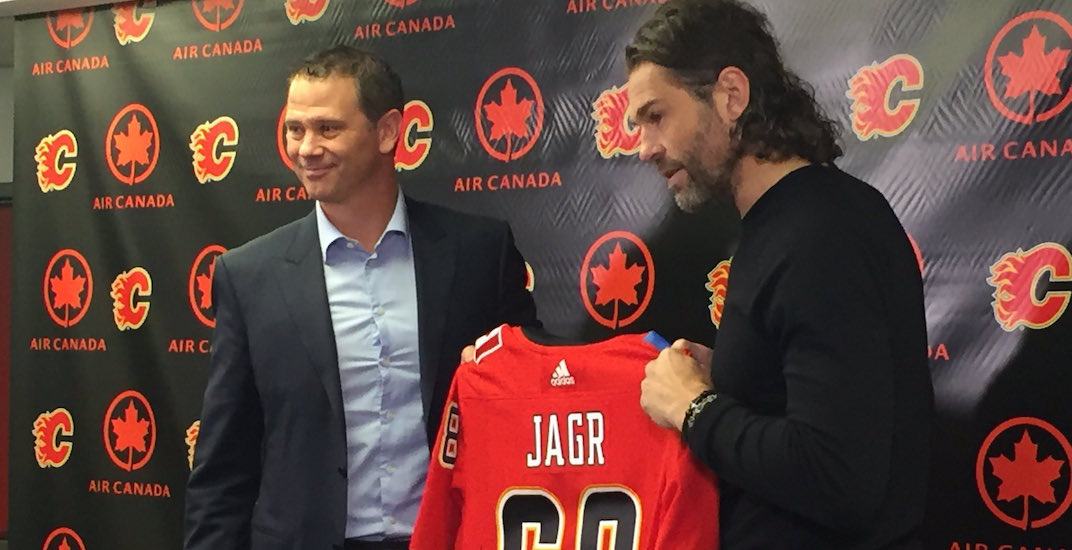 Jaromir Jagr may have put on a Calgary Flames jersey for the last time.

Rumours of the 45-year-old living legend’s departure are getting more intense. After TSN’s Bob McKenzie hinted that Jagr could leave Calgary on Friday, another well respected NHL insider added more fuel to the fire on Saturday.

On Hockey Night in Canada, Elliotte Friedman reported that the Flames and Jagr are “working on an exit.”

“There’s a certain amount of respect that he has earned and deserves to have and Calgary is trying to give it to him,” Friedman said. “His agent, Petr Svoboda, has been given permission to talk to every other team in the league to see if there’s a fit for him. At this time there isn’t. … His time in Calgary is about done and they’re just trying to figure out how they’re going to go about it.”

Jagr hasn’t fit in well with the Flames, scoring just one goal and six assists in 22 games. He’s currently dealing with a lower body injury.

The future Hall of Famer has said that this will be his last season. He trails the all-time games played record by 34 games, with just 41 games left on Calgary’s schedule.

From Headlines: CAL/Jagr working on an exit. Jagr deserves to be treated w/respect and agent has permission to talk to other clubs. Nothing materialized yet, but time in CAL is drawing to an end. There is believed to be European interest.

Jagr could find a home with another NHL team or with a club Europe. If he goes to Europe, he could potentially represent the Czech Republic at the Olympics.