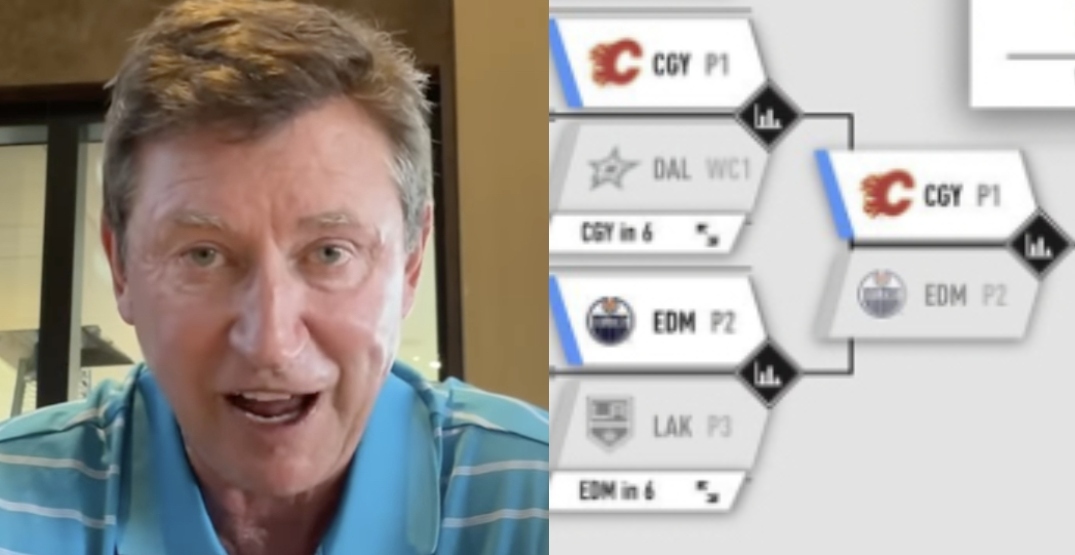 Edmonton Oilers fans? Not so much.

But Wayne Gretzky has spoken.

Gretzky revealed his bracket challenge for the 2022 Stanley Cup Playoffs on the NHL’s official Instagram page, highlighting his picks to win each and every series along the way to a St. Louis Blues and Carolina Hurricanes Final.

His most interesting choice has “The Great One” picking the Calgary Flames to topple the Edmonton Oilers in the second round.

He’s a 10-time winner of the Art Ross Trophy as the NHL’s leading scorer, including seven consecutive, and twice won the Conn Smythe Trophy as playoff MVP. He won the Ted Lindsay Award, given to the MVP as voted by players five times, and also has been awarded the Lady Byng Trophy, as the league’s most gentlemanly player, five times.

Oilers fans probably find him less than gentlemanly in his prediction, though.

He does, however, have the Oilers beating the Kings in their first-round matchup, interestingly enough, to set up a second-round date with the Flames. Edmonton trails Los Angeles 1-0 in the best-of-7 series.

Calgary, who leads the Dallas Stars 1-0 in their series, will lose out to the St. Louis Blues, another one of Gretzky’s former teams, in the Western Conference Final, according to Gretzky’s bracket.

“St. Louis versus Calgary is an interesting matchup because I think both teams were built for the Stanley Cup Playoffs,” Gretzky said in a video accompanying his choice. “I like St. Louis because I like their middle with O’Reilly and Brayden Schenn. I’m picking St. Louis to get to the Stanley Cup Finals.”

Gretzky has the Hurricanes hoisting the Stanley Cup, besting the Blues.

Regardless of that result, we’re sure Oilers and Flames fans would love to reignite the Battle of Alberta in this year’s postseason.