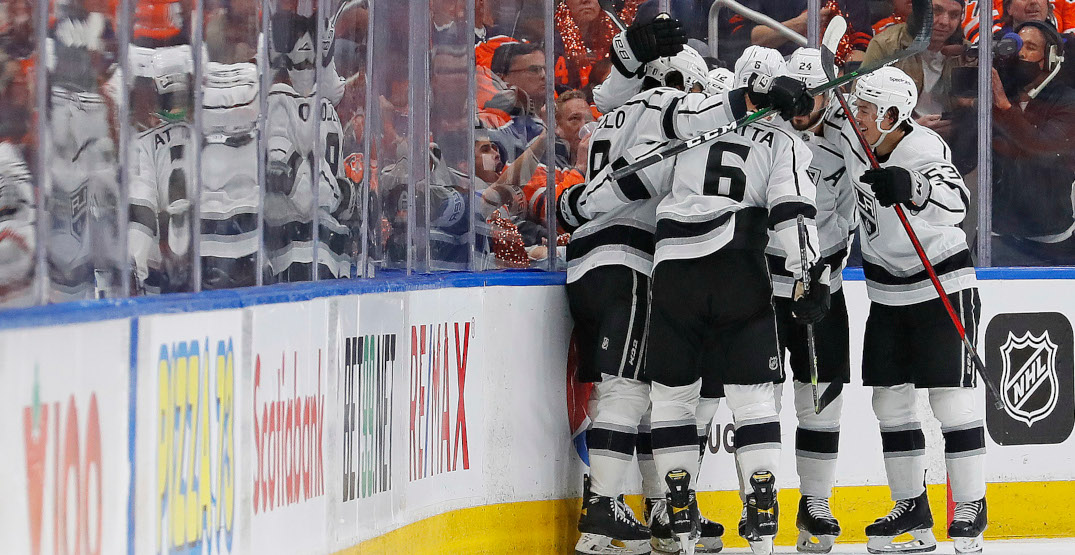 So much for home-ice advantage.

The Edmonton Oilers clawed their way back from an early deficit, but ended up dropping Game 1 against the Los Angeles Kings 4-3.

Late in the third period, Mike Smith made a miraculous save after coughing up the puck in his own zone. However, rookie defenceman Sean Durzi was able to bury the game-winning goal later in the sequence.

What a strange sequence of events, ending with a @SeanDurzi goal!

“Just trying to make something happen,” Smith said during the post-game press conference. “Obviously I was doing too much there.”

“You can’t do anything about it now, it’s over.”

Although the contest went back and forth, the Oilers never had a lead at any point during the game.

A large reason for their lack of success can be attributed to the uneven play of Smith.

Oilers with most of the chances but lose due to goaltendinghttps://t.co/7S4ChEEu42 pic.twitter.com/MuRH57NaOq

While he wasn’t horrid, the third-period giveaway symbolizes the type of tumultuous play that the Oilers have gotten from Smith over the past couple of years.

Although he’s given Edmonton above-average goaltending during the last two regular seasons with a .919 save percentage, Smith has now lost five straight playoff games for the Oilers.

Dating back to his time with Calgary, Smith has lost 10 straight playoff games.

The 40-year-old netminder gave up two goals early in the game. Trevor Moore, who quietly posted 48 points during the regular season, opened the scoring for LA.

He then set up linemate Alex Iafallo to give the Kings a 2-0 lead.

Alex Iafallo buries on a 🔥 pass from @TrevMoore08. 🚨#GKG pic.twitter.com/bIDn2ouwyt

Moore finished the night with a game-high three points (one goal, two assists).

Shortly after the 2-0 goal for LA, Connor McDavid made his playoff arrival.

Yeah he'll do that. #LetsGoOilers pic.twitter.com/QttBkNKo8k

The teams traded goals in the second period, before Leon Draisaitl joined his superstar teammate on the scoresheet with a goal of his own.

The crowd roar on this one. 📈#LetsGoOilers pic.twitter.com/Edb9lDSndI

Edmonton’s power play was clicking on the night, scoring twice on four opportunities. That was overshadowed by the fact that they were outscored 4-1 at even strength.

McDavid cited his team’s slow start and the third-period gaffe as the reason why his team lost the game.

“They got the jump on us,” McDavid said during the post-game press conference. “I thought we did a great job of getting ourselves back into the game, but it came down to one bounce.”

“We didn’t have a great start, gave up a few chances and found ourselves down 2-0.”

The Oilers couldn’t take advantage of a raucous crowd at Rogers Place on Monday night. It was the first time that Edmonton hosted a home playoff game in front of fans since May 7, 2017, when they defeated the Anaheim Ducks 7-1 in Game 6 of the second round.