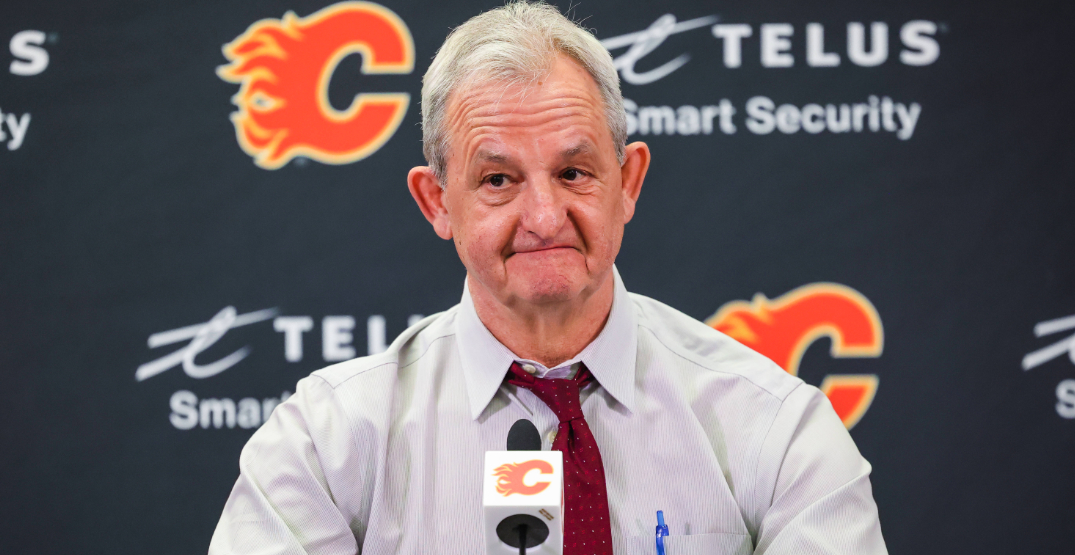 Darryl Sutter is not interested in having his Calgary Flames face the Colorado Avalanche as a wild-card seed into the Stanley Cup Playoffs.

Sutter, whose group lost two of three meetings against the Avalanche — the first NHL team to 100 points this season and the ninth club in the past 45 years to reach the 100-point mark in 67 games or fewer — isn’t about that first-round playoff matchup.

Or the beating that’ll come as a result.

“You want to finish as high as you can. Once you’ve established yourself when you have 10 games left that you’re in the race, then you try and stay in the race. Every night we don’t play we lose ground. Every night.

“Our whole thing was wild card was not a factor. There won’t be a wild card (from the Pacific Division). I said that. I didn’t believe that. I thought they’d come out of the Central, whether that happens or not. But it’s pretty much holding true for the most part.

“I always said Vegas and Edmonton. Well, I still believe Vegas, Edmonton. The teams that were quietly coming were Vancouver and LA. Where did Calgary fit into that? You better fight for it. It’s the only way you can get in.”

It’s not the first time this month that Sutter has been ultra-complimentary of the league’s top team, calling a first-round matchup against the Avalanche “a waste of eight days” earlier this month.

He’s seen enough of them to know.

The Flames beat Colorado 4-3 in overtime on March 5. Backup goalie Dan Vladar made 33 saves before Johnny Gaudreau iced the game in the extra frame on a breakaway set up by Elias Lindholm.

Avalanche goaltender Darcy Kuemper, who was pulled in the first meeting, hammered out his retribution with a 46-save shutout in a 3-0 win on March 13.

“The first game I think 5-on-5 we beat them,” defenceman Erik Gudbranson said. “The second game they took it to us. The third, 5-on-5, I think we had a slight edge. It just came down to special teams. At the end of the day, you look at that as a mini-series…the way we’ve looked at it is certainly like a little playoff series, and we didn’t come up with the win.

“We did some good things. There’s things that they capitalized on that we could’ve shut down. They’re a good hockey team. We’re going to have to take those lessons that we’ve learned now and apply them to our game very soon.”

"We're not looking too far forward – it's a day-by-day approach."

Erik Gudbranson and Blake Coleman talk about the #Flames mindset through the stretch drive and preparing for tomorrow's clash vs. the Kings. pic.twitter.com/7kJ78GrGuP

The Flames really shouldn’t need to concern themselves with a potential first-round date against Colorado. They’re a lot closer to Pacific champions than a wild card berth.

Calgary leads the Los Angeles Kings by seven points for first in the Pacific Division, with two games at hand. Even a marginal record down the stretch will see the Flames lock in a division title at some point in the next couple weeks.

The Flames would have to be leapfrogged in the standings by the Kings, Edmonton Oilers, and fourth-place Vegas Golden Knights. Calgary leads Vegas by 12 points with two games at hand, and only a dozen skates remaining in the regular season for the inconsistent and injury-riddled Golden Knights.

And if the Flames secure the Pacific and the Avalanche the Central, the earliest the two teams could meet is the Western Conference Final — should both teams advance that far.

Calgary’s not thinking that far ahead, though.

The team hasn’t even committed to claiming they’ve locked in a playoff appearance.

“The No. 1 goal that we have, clearly, for the regular season is to make the playoffs.”