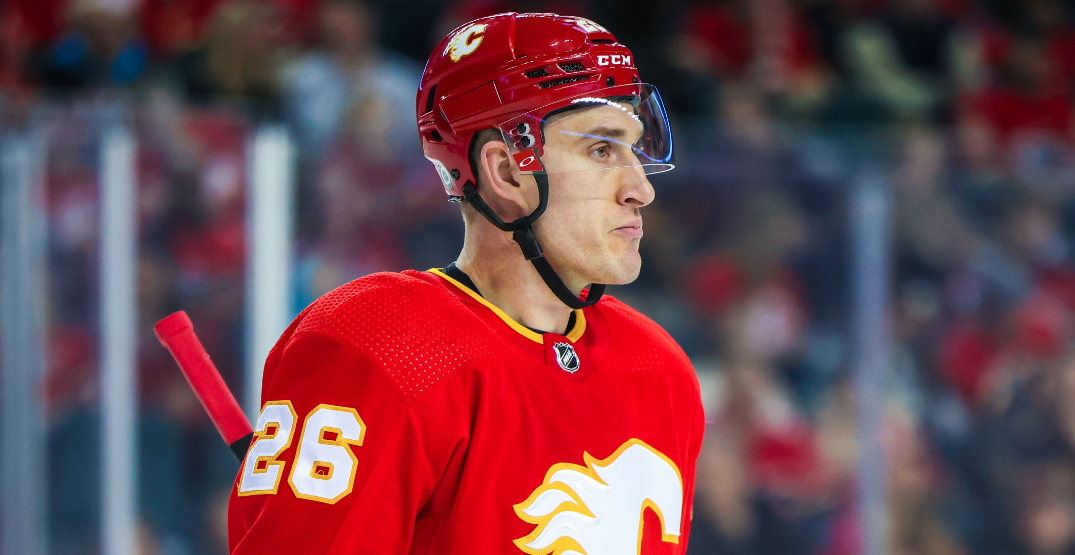 If you said you saw blueliner Michael Stone coming out of the bullpen to help contribute meaningful minutes to helping the Calgary Flames dispatch the Dallas Stars in seven games of their opening-round series of the Stanley Cup Playoffs, well, you might’ve been stretching the truth.

If you called at almost any time in the regular season, well, chances are you’re a flat-out liar.

That’s not to disparage the work that Stone — a 31-year-old right-shot rearguard who’s been with the organization for parts of six seasons now — but more a reflection of how the Flames unitized the depth defenceman this season.

He played just two games before logging nine skates down the stretch, including seven in April alone.

But he’s got four playoff tilts and three points (one goal, two assists) to show for his body of work. With Christopher Tanev’s status questionable at best to start a second round ‘Battle of Alberta’ series with the Edmonton Oilers, too, Stone’s stock couldn’t be higher.

And the soft-spoken, happy-go-lucky rocket launcher is just going about his business.

“I come to work every day, and whatever is needed from me, I’m, hopefully, there to provide that,” said Stone, who was inserted in Game 4 and launched a team-best eight shots on goal in a game-low 10:12 of ice-time in Game 4, including four shots in a 30-second span in the second period.

“I was given an opportunity to play in the last series, and I just want to make the most of that.”

Stone, who had a goal and an assist in Game 6 and played 21:30 in Calgary’s Game 7 series clincher on Sunday, might be underselling it a bit.

His journey to the second round of the playoffs — his second venture that deep into the postseason and first since his rookie campaign — is anything but a run-of-the-mill, next-man-up chance for the former Calgary Hitmen captain.

It might be hyperbole on some level to suggest his NHL career has been in jeopardy more than once, but it’s been a battle for the Winnipeg product to still be here.

Stone was initially acquired by the Flames in February of 2017 amidst a struggling season with the Arizona Coyotes. However, whether he’ll admit it or not, Stone was still in the process of recovering from ACL surgery the offseason prior and, as some would argue, either struggled or slowed a step as a result.

He played a full 82-game slate the following year but manufactured just 10 points (three goals, seven assists), well below career bests that saw him net six goals and 36 points as a member of the Coyotes two seasons prior.

Then, just 11 games into the 2018 to 2019 campaign, Stone was diagnosed with a blood clot that sidelined him for more than four months.

Down, but not out.

Because he wasn’t done.

“That starts when I had the blood clot and spent three months practicing by myself,” Stone said. “I think working with her allowed me to become a better player. I think I took those three months and did something with it. I didn’t just sit around and feel sorry for myself. I give her a lot of credit too.

“She pushed me to do things out of my comfort zone, and now I don’t even know I’m doing them half the time. I give her a lot of credit for that.”

His time on the shelf wasn’t without cost, though. From the sidelines, Stone slid down the depth chart.

He never doubted, however.

“When I was a kid, I didn’t want to do anything else, and I never changed through that process, so I didn’t think that was going to be an issue,” Stone said.

He’d been passed by up-and-comers, and the Flames eventually bought out the final year of Stone’s contract, leaving him an unrestricted free agent. It was a situation that was remedied shortly thereafter, kind of awkwardly, when Calgary ran into injury issues that offseason.

He signed up for another year of duty with the Flames at the league minimum.

Stone has been on spot duty ever since, logging 61 regular-season games over the next three seasons as the No. 7 on Calgary’s depth chart.

For those scoring at home, that’s four head coaches on, technically, five different contracts during his tenure with the Flames, including three consecutive one-year, league-minimum deals to stay with the team in a support role.

Now he’s at the forefront.

And his journey to get there hasn’t gone under-appreciated.

“I think it’s probably the hardest role to have on the team, and to be honest, when Stoney came into the lineup, it gave us an energy boost, and he provided us with that,” Flames forward Milan Lucic said candidly.

“He has a lot of respect from us as a group and the work and time he’s put into keeping himself ready, and when he’s come in, he’s always provided us with energy and quality minutes, so it’s great to see. We trust in him, and we know he’s going to continue being a great player for us.”

They could need it.

His winding road, however, has him ready.

“I would say it’s a unique [path] that not many would be taking, so yeah, you could say that,” said Stone, who’s logged just 10 playoff games after amassing 504 career regular-season bouts. “I don’t think anybody; myself included, stopped believing that I could be a difference [maker].