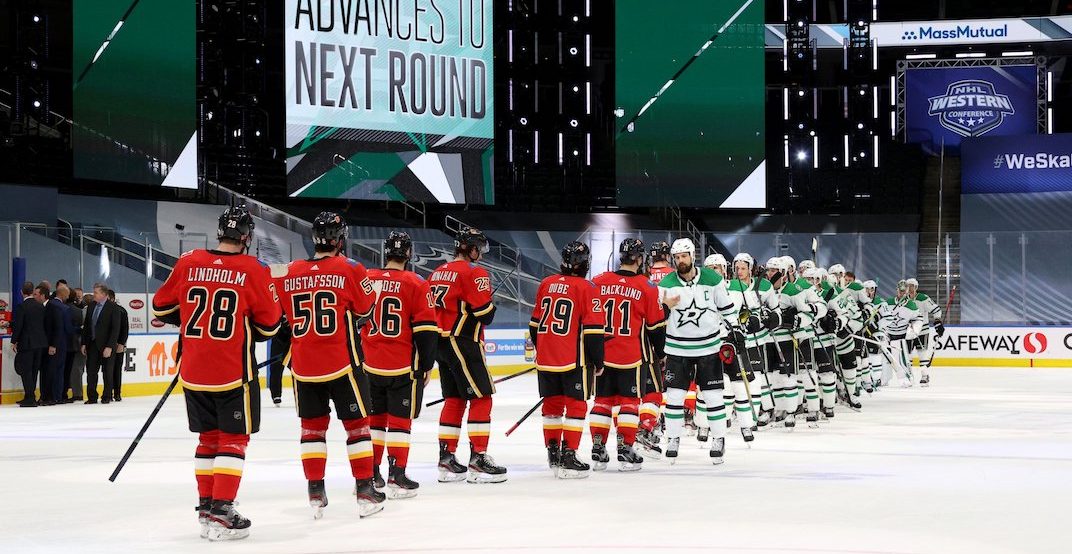 There doesn’t seem to be a logical place to start when it comes to the Calgary Flames organization following a stunning Game 6 collapse on Thursday night.

Do you address the second period collapse?

Do you address Calgary’s best players failing to rise to the occasion yet again?

Do you address the decision to put in a cold David Rittich?

There’s honestly a laundry list of issues to pull from when talking about the Flames over this single game, but it was a game that perfectly encapsulated the entire season.

A lack of commitment to defending the net front, an easing off the offensive pedal when the team felt they had the game in the bag, undisciplined penalties leading to goals, and an overall lack of any semblance of consistency.

It was a truly remarkable evening of hockey for the Flames organization in the worst possible way, who seem poised to make sizeable moves ahead of puck drop this winter.

To allow seven consecutive goals is something incredibly rare in the National Hockey League, let alone doing so after your best period of the playoffs.

Calgary came out with the most energy they’ve shown since entering the bubble over the opening minutes of the first period, astoundingly taking a 3-0 lead in less than seven minutes.

It was the Flames rising to the occasion seemingly for the first time in this series, generating over a dozen shots on net over the opening 20 minutes.

Dallas’ Miro Heiskanen was able to get one back on the power play before the period’s end, however the Flames were fully in the driver’s seat with most if not all the momentum.

Then came arguably the worst collapse in Calgary Flames history.

Four Dallas goals scored within 6:23 somehow put the Stars in front on a bewildered and stunned Flames team that did little in the way of pushing back.

Over the course of Calgary’s 10 postseason games in the bubble in Edmonton, it was a number of mid-range players leading the way offensively and defensively.

Players like Cam Talbot, Sam Bennett, Dillon Dube, and Rasmus Andersson stepped up their games in a big way and saw growth in their play as the playoffs went along.

The concerning part about that group, is none of Calgary’s top talent in these playoffs earned over $3 million or were in any way near tops on the Flames in ice time.

Flames veterans like Johnny Gaudreau, Sean Monahan, and Mark Giordano were all thoroughly underwhelming for the second straight playoffs and despite some brief moments of skill, it wasn’t enough to drive play for Calgary.

Gaudreau wrapped up his playoffs with four goals and seven points in nine games for a decent enough stat line, but the Flames star who just one year ago almost hit the 100-point plateau was ghost-like for large stretches of the series.

The 27-year-old was one of Calgary’s best players early in Game 6, but as the night went along and his team began slipping below the surface there was little in the way of results.

Monahan’s series was even worse, failing to register a goal in six games and ending his first round of the Stanley Cup playoffs with just two assists.

‘Father Time’ appears to have caught up to the 36-year-old Flames captain Giordano who appeared slow and ineffective for much of the playoffs and only recorded three points in 10 games.

There’s no questioning that the Calgary Flames season was turned around in part by interim head coach Geoff Ward after the resignation of Bill Peters mid-season.

After taking over the helm of the Flames, Ward was able to compile a record of 24-15-3 in regular season play and guide Calgary to the eighth seed in the Western Conference.

There is a compelling case to be made to remove the interim tag ahead of the 2020-21 season and instate Ward as the permanent head coach of the Flames.

In hindsight, Ward did himself no favours on Thursday night with the decision to pull Talbot in the second period in favour of an ice-cold David Rittich.

Talbot struggled in the middle frame with three goals allowed on eight shots and the Flames were in search of a spark, however the move to put Rittich into his first game in over five months backfired.

Rittich played just as bad with three goals allowed on nine shots, with his defenders not providing the Czech netminder any favours in letting the Stars walk through the crease.

To start the third period Ward elected to go back to the Talbot, who in fairness deserved to be back in the crease as he was Calgary’s MVP in these playoffs with a .934 save percentage entering Thursday’s Game 6.

Unfortunately for Ward, he will be second-guessed on that call for the rest of the off-season and it’s no certainty that he’ll be back behind the bench come puck drop next year.

In reality, this series was over after Game 4 when the Flames were a mere 12 seconds away from taking a 3-1 series lead against the Stars before falling in overtime.

Calgary’s core of Gaudreau, Monahan, Giordano, Mikael Backlund, T.J. Brodie and Matthew Tkachuk have now been together for three post-season appearances in four years and have yet to reach the second round of the playoffs.

In fact, the Flames have only been able to make it past the first round of the post-season once (2015) going all the way back to the team’s 2004 run to the Stanley Cup Final.

That was over a decade and a half ago, as the Flames have now earned a reputation as a team that has been unable to get it done when it counts.

#CofRed, thank you for all of the support through this wild 2020 postseason.

You're the best fans in the NHL, no question. pic.twitter.com/mQ41mNUY2f

These playoffs, as weird and unorthodox as they’ve been, have been a referendum of sorts for the Flames and change will be a necessity this off-season for a team that can’t get over the hump.

Decisions will need to be made on that group regarding who will return, however there are calls to break up Calgary’s core in favour of changing the dynamic around the team.

Tkachuk is probably the only untouchable player on the Flames roster, though there are other young talents like Juuso Valimaki, Dillon Dube, and Andersson that are likely locks.

The rest of the roster should be fair game, as general manager Brad Treliving will earn his paycheque this off-season.

Albert Einstein famously is attributed to the quote, “The definition of insanity is doing the same thing over and over again and expecting a different result.”

For the Flames, it might be time to change the equation.