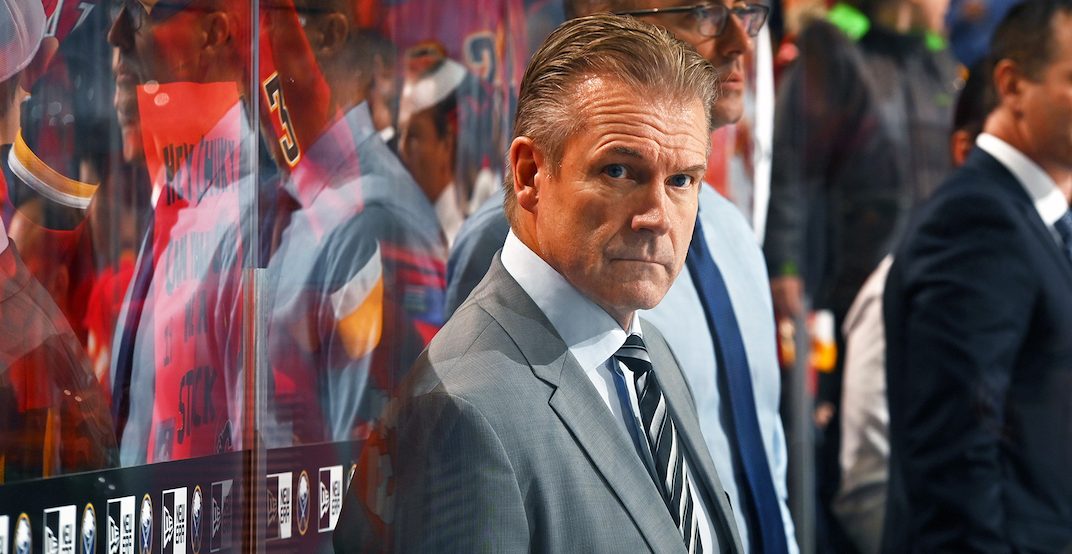 Who are these players in red and what have they done with the Calgary Flames?

After a hellish November that saw the team spiral down the standings and a controversy involving former head coach Bill Peters that captured the attention of the entire league, the Flames are now the NHL’s hottest team.

Seven straight wins capped off with a thrilling 4-2 comeback victory at home over the Toronto Maple Leafs on Thursday night, Calgary has unexpectedly moved into a tie for second place in the Pacific Division with their provincial rivals from Edmonton.

Just two weeks ago that prospect seemed as distant as Matthew Tkachuk-Drew Doughty handshake, with scandal and defeat piling up on the Flames doorstep.

“I’m most proud of the way that the guys have come together,” Ward told reporters following Thursday’s victory over Toronto. “They stick up for each other, they play for one another, and we’re really starting to see a nice synergy in our team.”

It’s been a remarkable run for the longtime assistant Ward, who before November 27 had never been given the keys to the castle of an NHL club.

While Calgary’s systems haven’t changed dramatically since Ward’s promotion, small tweaks to the team’s depth charts and practice routines have been noticed.

Probably the most tangible adjustment under the Ward regime came ahead of Calgary’s December 5 tilt at home against the Buffalo Sabres.

Despite the team coming off back-to-back victories for the first time in almost a month, a number of top offensive weapons including Johnny Gaudreau and Sean Monahan remained mired in lengthy goal droughts.

That’s when Ward raised more than a few eyebrows by throwing Calgary’s forward lines into a blender, which included bumping Gaudreau down to third line minutes with Milan Lucic and Derek Ryan.

Monahan was split up from Gaudreau and Elias Lindholm and put with Mikael Backlund, while sophomores Andrew Mangiapane and Dillon Dube were both elevated to top-six roles.

Wouldn’t you know, Gaudreau and Monahan both found the back of the net against the Sabres en-route to a 4-3 win over Buffalo.

Better wash those mitts, 'cause that shot is FILTHY. #BUFvsCGY | #Flames pic.twitter.com/lF9zjyt66B

Hell, even Lucic was able to end a 27-game goalless drought to cash in his first as a Flame and the first of three scored during this winning streak.

More than anyone, the change has seemed to spark Gaudreau who went close to a month between goals and now has three markers in his last two games.

“I’m getting good looks obviously playing with a lot of different players,” said Gaudreau to Flames TV. “So, it’s been great. I’ve been finding a lot of chances and found a way to put a couple in.”

Interestingly enough, Ward elected to leave Calgary’s fourth line of Tobias Rieder, Mark Jankowski, and Michael Frolik together, despite the trio’s struggles offensively through the first third of the 2019-20 season.

With his game-winner against the Maple Leafs on Thursday, Frolik is riding a three-game goal streak and is easily playing some of the best hockey of his season.

“Obviously with the coaching staff I think we feel like we are more a part of the group as a fourth line,” said Frolik. “We’re the ones to keep rolling four lines and have a little bit of depth.”

Practices at the Scotiabank Saddledome have also taken a bit of a lighter tone since Peters’ resignation with Ward allowing players to blast music over the arena’s PA system, surprising many of the reporters covering the team.

Flames clearly trying to usher in a new chapter with music during practice. Tiny Dancer followed by Radio Gaga and It’s Tricky. Players having fun with it and management jokes they’re taking requests… pic.twitter.com/Hi9Ur6sj6J

However, expectations for the players have remained high and is something that leaders like Gaudreau are taking note of.

“He expects a lot out of us but we like playing for him,” said Gaudreau. “He runs a great practice I guess and does a great job in video. But, for him to go seven games in a row never being a head coach, it’s pretty impressive.”

In the wake of Peters’ resignation and the accounts of his physical abuse as a motivator, questions have been asked of Ward about his motivational tactics in the NHL.

A former high school teacher before he took up the mantle of coaching hockey players, Ward told Scott Oake and Louie DeBrusk on Sportsnet’s After Hours that his priority is establishing relationships with players and it’s not in his nature to yell and scream at his troops.

The sample size is still quite small, however it appears that method is having a positive effect on team as not only have they been racking up wins but overcoming adversity as well.

“It’s been a bit of a theme lately, but our team has been pretty resilient now for probably the last three hockey games,” said Ward.

There’s still no guarantee that Ward will be the full-time solution moving forward, as general manager Brad Treliving could hire from outside the organization to fill the team’s head coaching vacancy.

But Ward is making a very strong case to ditch the interim tag though and it seems as though he’s already earned the confidence from a group of players who believe are turning their season around.

“It wasn’t the start we wanted for our team to start the season,” said Gaudreau. “Then with that whole [Peters] situation, put it behind us and started fresh with [Ward]. We’ve been playing really well, we’ve been playing smart. All the guys on our team have been playing well and it’s showing in our results.”