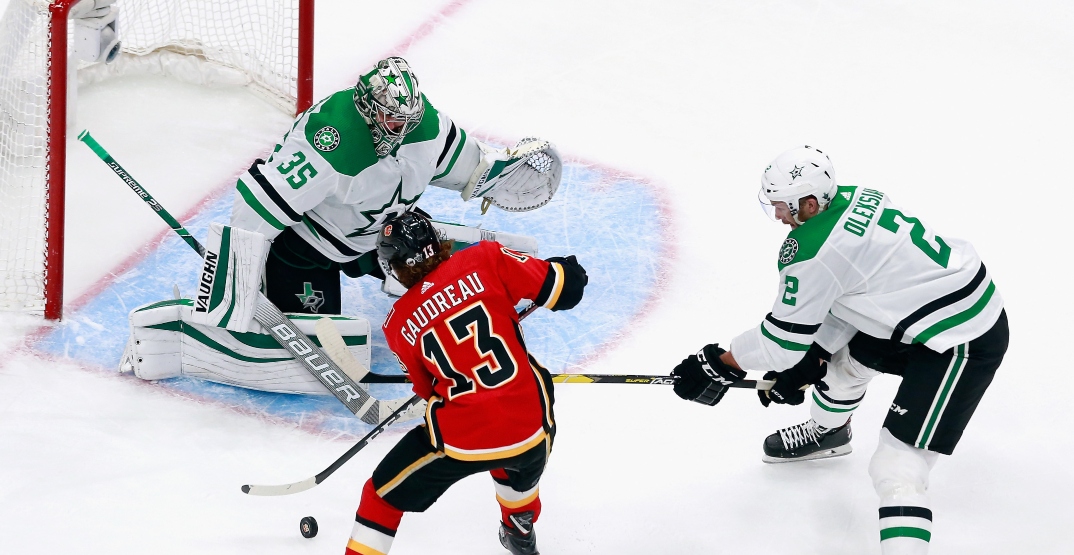 The Calgary Flames came out to start Game 6 looking like a team that didn’t want their season to end.

Unfortunately, they didn’t play like that for the whole game.

And so Calgary’s season is indeed over, having come to an end Thursday night after an early 3-0 lead dissolved into an ugly 7-3 defeat to the Dallas Stars.

The Stars won the best-of-seven series 4-2 and will move on to face the Colorado Avalanche in the Western Conference semi-finals.

After the Stars battled back from an awful start to tie the game, Radem Faksa put them up for good on the power play at the 5:42 mark of the second period.

The @DallasStars hype train is COMING THROUGH THE STATION! 🚂

Faksa scores on the power play and the Stars flip a 3-0 deficit into a 4-3 lead! They're HEATING UP! 👏 #GoStars pic.twitter.com/NAExhhgeM6

Things did look great for the Flames early on.

Just 3:42 into the game, Andrew Mangiapane deflected T.J.Brodie’s point shot by Anton Khudobin to make it 1-0 Calgary with his second goal of the postseason.

Andrew Mangiapane (@andrewmange13) got it started and it's been all @NHLFlames since. #StanleyCup

With the Flames on a power play just a few minutes later, Johnny Gaudreau banked his fourth goal of the playoffs in off Khudobin from behind the Dallas net.

Then just 56 seconds later, Rasmus Andersson joined the rush, took a drop pass from Tobias Rieder, and sniped his third goal of the playoffs by Khudobin.

With his team reeling, Stars coach Rick Bowness had to burn his timeout just 6:34 into the game.

Dallas was able to get one back a few minutes later. With Milan Lucic in the penalty box for goalie interference, Miro Heiskanen blasted a one-timer by Cam Talbot for his third goal of the playoffs.

Heiskanen scores with a rocket of a shot on the power play and the @DallasStars are on the board! 🚨 #GoStars pic.twitter.com/U2eMbYE8zi

The Flames outshot the Stars 15-5 in the first period, and although they’d have preferred not to have given Dallas any life with the Heiskanen goal, Calgary still had to be thrilled with the opening 20 minutes.

Just 59 seconds into the second period, though, Denis Gurianov ripped his third goal of the playoffs on a shot that seemed to surprise Talbot and pulled Dallas within one.

Denis Gurianov rips one past Talbot less than a minute into the second period! It's a one shot game!#GoStars | @DallasStars pic.twitter.com/1VSBWCYS7K

Only 2:26 later, Esa Lindell’s point shot deflected off Joe Pavelski, then Gurianov, then snuck through Talbot’s legs to tie the game.

This prompted Geoff Ward to make a goaltending change, as he put David Rittich in for his first action of the playoffs.

Rittich couldn’t stop the bleeding, though. After Gurianov’s second goal of the night tied it up, Faksa put the Stars on top just 2:22 later.

Things would just go from bad to worse for the Flames. Just 1:35 after Faksa gave Dallas the lead, Erik Gustafsson was trying to clear a loose puck away from the net, but instead banked it off Pavelski’s skate and in.

That may not have been the prettiest of Pavelski’s six goals so far this postseason, but when you’re hot, you’re hot.

It was quickly becoming clear that Ward’s decision to make goaltending change wasn’t working out. At the 15:30 mark of the second period, Gurianov stepped across the blue line and beat Rittich again.

EVERYTHING IS AWESOME. IT'S 6-3 NOW 🚨#GoStars | @DallasStars | #StanleyCup pic.twitter.com/xzKVX5MrNv

Gurianov’s hat trick made it six unanswered goals for the Stars. Five Dallas goals on just 12 shots in the second period had Calgary just 20 minutes away from elimination barring a big third period.

Talbot was back in goal to start the third after Rittich allowed three goals on nine shots.

It didn’t seem to matter who was in net for the Flames tonight, though.

At the 9:02 mark of the third period, Gurianov poured some more salt in the wound with his fourth goal of the game.

7-3 would end up being the final despite Calgary owning a 41-24 edge in shots on the night.

After a brutal five-game defeat to the Avalanche in the first round of last year’s playoffs, this is another tough series loss for the Flames to swallow, given that in Game 4 they were 12 seconds away from taking a commanding 3-1 series lead.

Instead, this series got away from them, and Calgary is still waiting to advance past the first round for the first time since 2015.