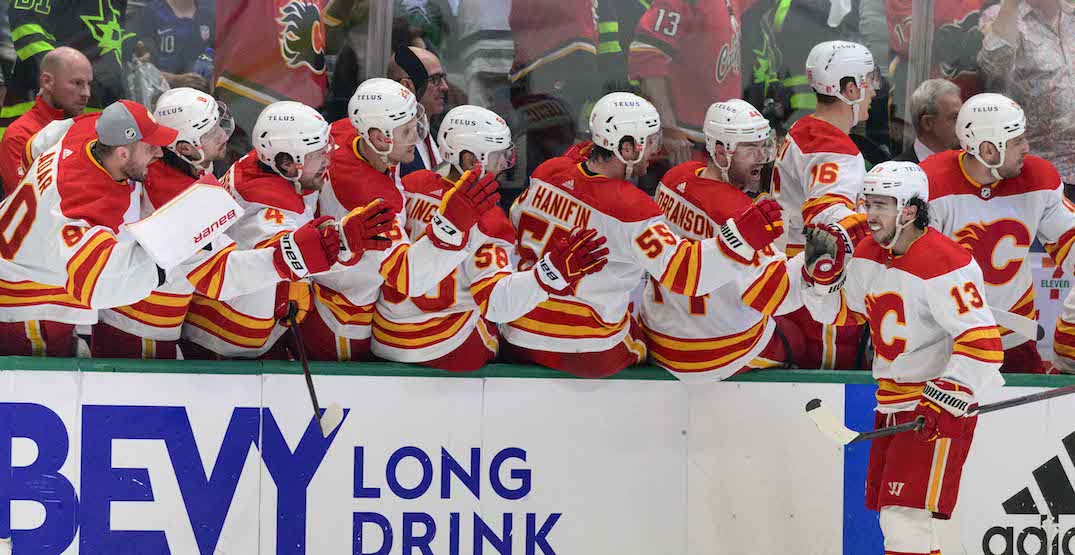 The Flames are coming home to Calgary with the series tied, after a critical 4-1 victory in Game 4.

It took generating 53 shots on goal, but the Flames’ big guns finally broke out in Dallas.

Jake Oettinger has frustrated the Flames for most of this series, and did so for most of this game too, giving up just one goal on the first 44 shots he faced on Monday. Calgary finally got some breathing room in the third period, after a spectacular penalty-shot goal by Johnny Gaudreau.

Rasmus Andersson was the first Flame to beat Oettinger, scoring on a booming slap shot from the point on a five-on-three power play midway through the second period.

Jacob Markstrom was outstanding for Calgary, particularly when the game was close, with a second-period save on Tyler Seguin proving to be his best. The Flames goaltender, who is expected to be named a finalist for the Vezina Trophy tomorrow morning, stopped 34 of the 35 shots he faced in the win.

Seguin scored Dallas’ lone goal of the game on a power play with under five minutes left in the third period. Mikael Backlund scored into an empty net for his first goal of the series, which put the game away with 22 seconds left.

Gaudreau, who also had an assist on Lindholm’s goal, left the game for a few minutes in the first period after taking a hit to the head from Vladislav Namestnikov.

Vlad Namestnikov with a hit to the head on Johnny Gaudreau.

The game began with some trickery from Flames head coach Darryl Sutter. After skating Brett Ritchie on the second line and Andrew Mangiapane on the fourth line during the morning skate, Sutter told reporters: “It’s a very fluid situation that’s evolving as the day goes along.”

Sutter laughed when saying it, but it turned out he wasn’t kidding.

By the pre-game warmup, Ritchie was back skating on the fourth line. Then when the game began, Ritchie was a healthy scratch.

He sat in favour of Michael Stone, who generated eight shots on goal in just 10:12 of ice time as the Flames’ seventh defenceman.

The 53-shot performance by the Flames set a new franchise record for most shots on goal in a 60-minute playoff game. The previous record was 52 shots, set during an 8-3 win over the LA Kings in 1989.

Game 5 is set for Wednesday in Calgary.