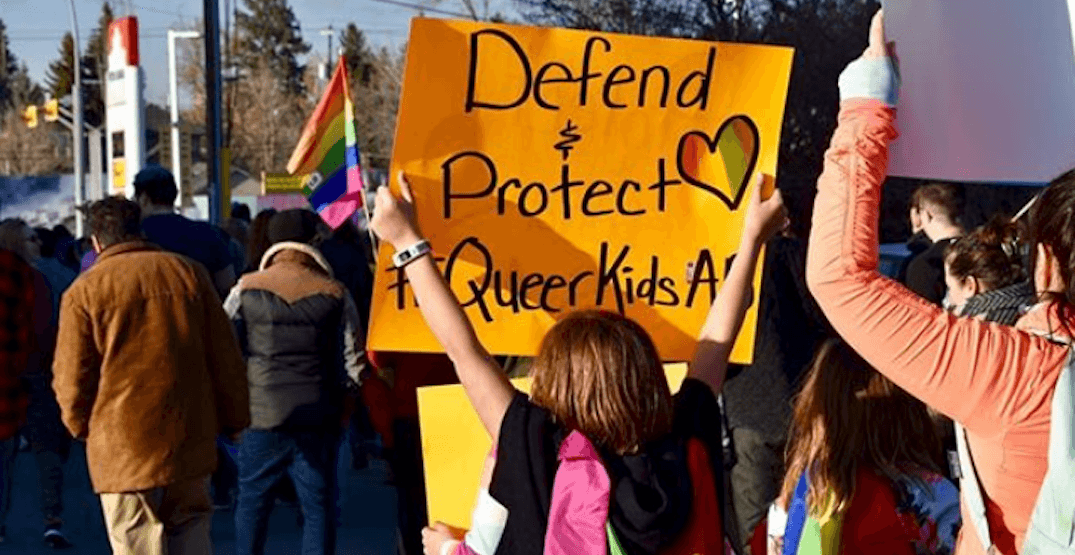 Grade school education in Alberta is facing big changes with the potential enactment of Bill 8, the Education Act, which was introduced on June 5.

Many Albertans have expressed their concerns at the new Alberta government’s plans to replace the existing School Act, which, as of 2017, includes the Bill 24 amendment ensuring that no member of a Gay-Straight Alliance/Queer-Straight Alliance may possibly be outed to their parents against their will.

“The principal is responsible for ensuring that notification, if any, respecting a voluntary student organization or an activity referred to in subsection (1) is limited to the fact of the establishment of the organization or the holding of the activity,” The School Act’s section 45.1(4) states.

Alberta’s Education Minister Adriana LaGrange released a statement on Friday to address the concerns being voiced about how the Education Act provides the opportunity for schools to notify parents that their children are members of GSAs — if they deem it necessary.

“We […] recognize every child is unique and every circumstance is different. Legislation needs to balance protecting children and their privacy with the rights of parents, so children are getting the supports they need. Though it would be rare, disclosure of GSA/QSA membership would only be justified on the basis that the disclosure would avert or minimize a risk of harm,” LaGrange said, in the statement.

Given the language of Alberta’s Freedom of Information and Protection of Privacy Act, students are protected from their personal information (in this case, their membership in a GSA) being disclosed if  “the third party whom the information is about has requested that the information not be disclosed,” according to the Act’s Section 17(3).

Section 17 (A) states that “The head of a public body must refuse to disclose personal information to an applicant if the disclosure would be an unreasonable invasion of a third party’s personal privacy.”

However, 17(2)(j) states that “disclosure of personal information is not an unreasonable invasion of a third party’s privacy if, subject to subsection (3), the disclosure is not contrary to the public interest and reveals only the following information about a third party: (i) enrolment in a school of a educational body or in a program offered by a post-secondary educational body, (iii) attendance or participation in a public event or activity related to a public body, including a graduation ceremony, sporting event, cultural program or club, or field trip.”

Given that, unless a public school student specifically requests that the school administration not disclose their membership, their attendance of the school club may be disclosed under the protections laid out in the Freedom of Information and Protection of Privacy Act.

The act then lists 18 different conditions wherein an individual’s personal information may be disclosed without the person’s consent, including:

“The disclosure of the information is necessary to respond to an emergency that threatens the life, health, or security of an individual or the public.”

The Government of Alberta released a document titled “The Education Act GSAs and Inclusion Groups” on June 4, laying out details on what kinds of situations would constitute a student’s GSA membership being disclosed to parents against their will:

“Some situations could occur that would justify disclosure to parents or others. These may include the following: where a school received credible information that someone was threatening to harm GSA members; if information came to the attention of a teacher as a result of a student disclosure made in the GSA setting (e.g. possibility of self-harm), disclosure may be justified in order to avert or minimize a risk of harm; or if disclosure is required for the purposes of law enforcement.”

The document also noted that, while “any student participating in a GSA has the right to ask their school authority not to disclose their participation,” the school is obligated to “consider each student’s unique circumstances and the law,” when determining the disclosure of their personal information without the student’s consent.

Critics of the Education Act have stated that even the potential of being outed by the school would be enough to stop some of Alberta’s most at-risk youth from joining a GSA.

“GSAs are meant to be a safe space, and it becomes less so when there is a threat of them being outed,” said Aimee, a spokesperson for the May 3 student walkout in protest of the Education Act.

“Additionally, students should be the ones to decide when they are ready to come out, not the government.”

“GSA/QSAs save lives. Students do NOT want these protections rolled back. Our entire @abndpcaucus will continue to stand with LGBTQ+ students and support them as they rally for their rights,” she wrote.

Notley also linked to a Facebook event organized for a July 19 protest rally titled: “Pride is a Protest: Rally to Save Gay-Straight Alliances,” which aims to “let Jason Kenney know once and for all that the lives of LGBTQ2S+ kids are worth saving.”

While on the campaign trail leading up to the 2019 provincial election, Kenney spoke on the proposed changes to GSA protections.

On March 26, he stated that “in some unique cases, especially dealing with younger kids — perhaps younger kids being bullied who have emotional and mental health challenges — engaging the loving support of a parent is entirely reasonable,” Kenney said at a campaign event.

“We say let highly-trained teachers and principals make a decision on a case by case basis of what’s in the best interest of the child.”