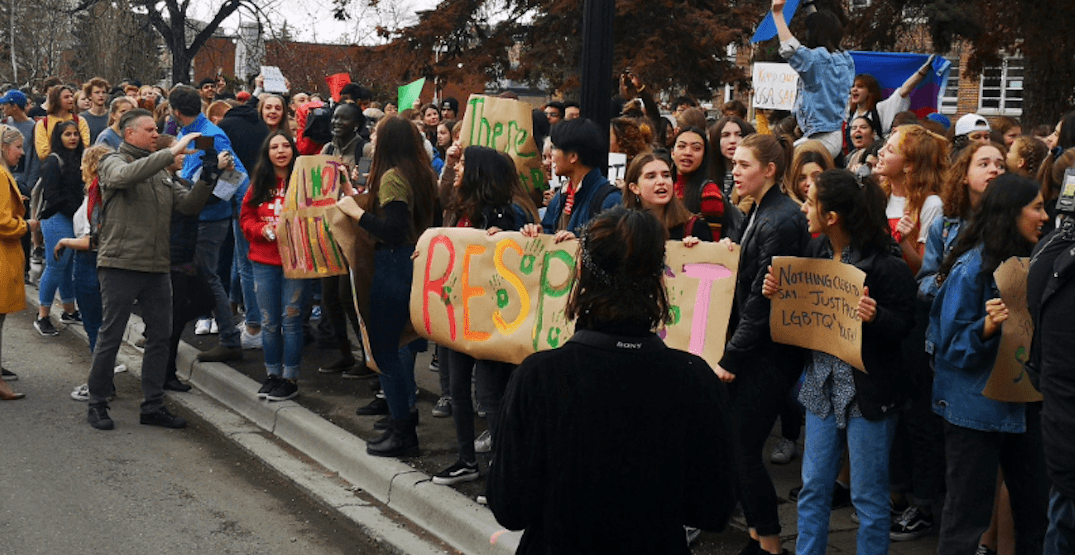 They may not be old enough to vote, but that didn’t stop thousands of Albertan students from protesting the removal of gay-straight alliance protections.

A student-organized walk-out protest was held across Alberta this morning in opposition to newly-appointed premier Jason Kenney’s announced plans to make changes to Alberta’s education system, most notably by proclaiming his plans for the Education Act (Bill 10).

The Act would replace the NDP’s revamped School Act and many of the amendments that came along with Bill 24 — including the requirement for school principals to grant permission for students to form gay-straight alliances immediately and for all schools to have public policies that protect LGBTQ+ students.

Aimee, the spokesperson for the organized protest, spoke with Daily Hive via email about what the students hoped to accomplish by participating in the 20-minute peaceful protest.

“The purpose of this protest is to prevent the UCP government from reverting to Bill 10. Bill 10, or rather The Education Act, would allow teachers to tell parents that their child is in a GSA,” she wrote.

“Additionally, schools would no longer be required to have very clearly established rules against LGBTQ2S+ bullying. We hope to convince the government to leave Bill 24 as it is.”

Aimee was not alone at 9:30 am this morning, as protests were held across the province.

Signs were made, rallies were held, and a march through Edmonton ended at the Alberta Legislature.

Take a look below to see students making their voices heard in defending gay-straight alliance protections:

Students & faculty at U of C Faculty of Social Work show their support for the Alberta Students’ Walkout in protest of the Kenney administration policies #GSA #QueerKidsAB ⁦@CalgarySWSJ⁩ ⁦@ACSWsocialwork⁩ pic.twitter.com/8cBwKhLhG1

Sexuality and identity MUST NOT effect education. Support equality. Students are also protesting many other educational changes that #jasonkenny #Conservativepartyofcanada wants to change. Listen to the youth. #lgbtq #gsa #studentwalkout #edmonton #alberta pic.twitter.com/jiYzk6BAck

Youth walk out of schools all across Alberta today in support of #GSA s and #QueerKidsAB. #GSAssavelives #ABleg Jason Kenney pic.twitter.com/N121lP17ep

Here’s a look outside Queen Elizabeth High School in #yyc where students have gathered as part of a province wide walkout to protest plans to change policies around #GSA’s in #Alberta pic.twitter.com/a17BxN5I0a