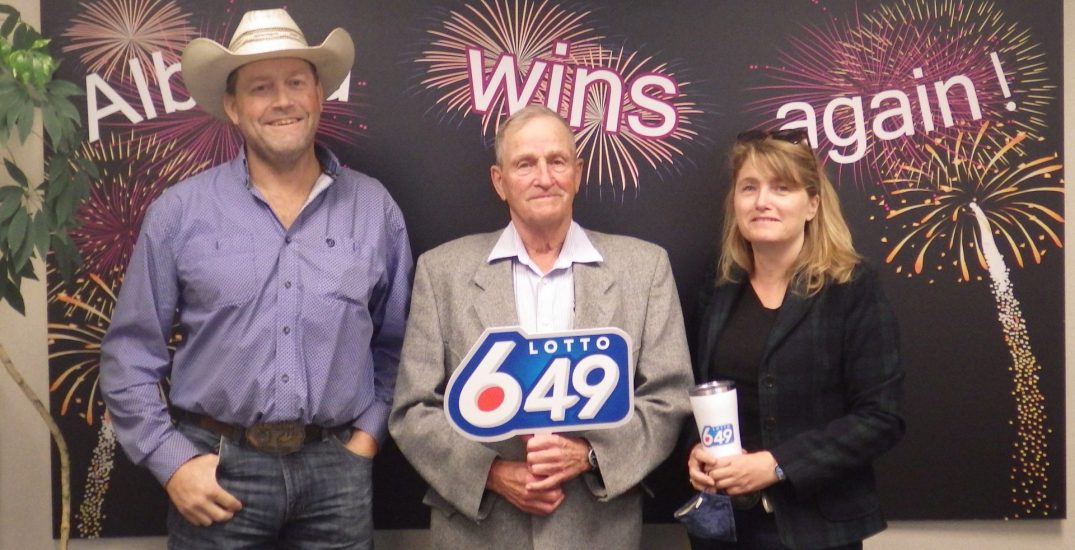 When Dennis Hines checked a LOTTO 6/49 ticket that he shares with his children, he had a few thoughts, but not one part of him believed that they had won $18 million.

Dennis purchased the winning lottery ticket at Marwayne Service and Café, located at 407 Railway Avenue South in Marwayne, Alberta, on behalf of himself and his children, Richard of Marwayne and Shanon of Airdrie.

The family patriarch seemed to be on a bit of a winning streak, as Hines had won the lucky ticket on a LOTTO 6/49 Free Play in the previous draw, according to a media release from the Western Canada Lottery Corporation (WCLC). He spent $1 to add EXTRA to the ticket.

“I thought it was [a] joke,” Dennis told WCLC while claiming the prize with his children. “I saw all of those zeroes and thought, ‘Yeah, right!'”

“When I looked at it again, I thought it said $86,000 or something like that,” he continued. “I never thought it would be anything close to $18 million!”

Upon seeing the winning numbers, the lucky father said that he didn’t waste time in the store. He walked out and called his kids to give them the good news.

“None of us could believe it,” said Richard. “It’s a huge amount to wrap your head around.” More than two months after their win, the group says they’re still trying to come to terms with just how a large a prize it is.

How does the family plan to spend their winnings? They’re not entirely sure yet, but they have a few thoughts.

“I think we’ve all been so surprised that we haven’t really had a chance to think what we’ll do with the money,” said Dennis.

“Well, I guess I know one thing I’m going to do: I’m going to pay off the truck I bought myself a few months ago.”

The Alberta lottery winners also plan to donate to a charity that’s close to their hearts.