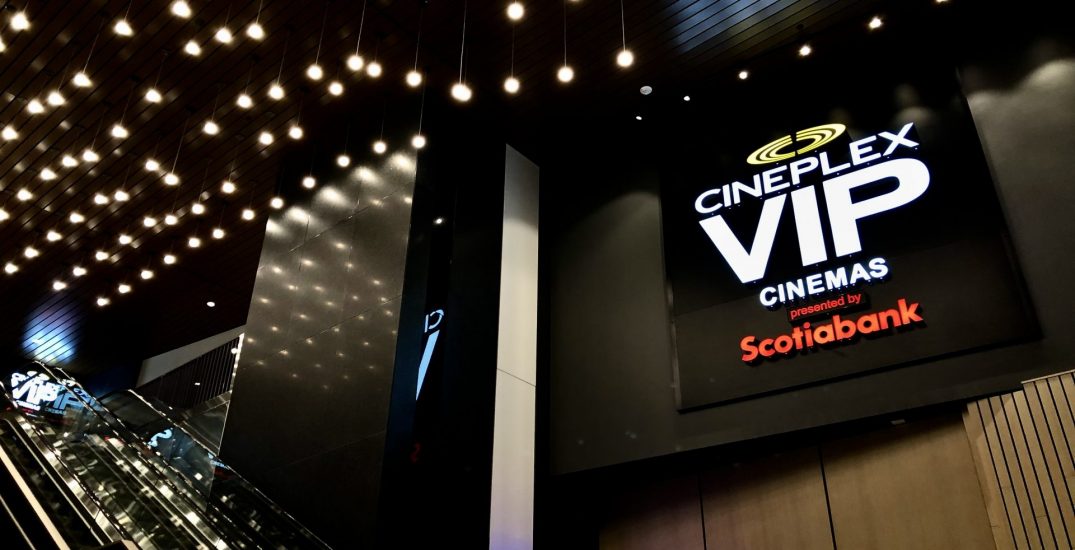 Cineplex is opening its second VIP theatre in Calgary this week and the location will be the first of its kind in Alberta.

The new Cineplex VIP Cinemas University District location will be home to five VIP auditoriums, and it’s the only Cineplex in the province to be an exclusively standalone VIP theatre.

Calgary’s first Cineplex VIP Cinemas opened a few years ago in the southeast community of Seton; however, that location features traditional auditoriums in addition to the VIP option. 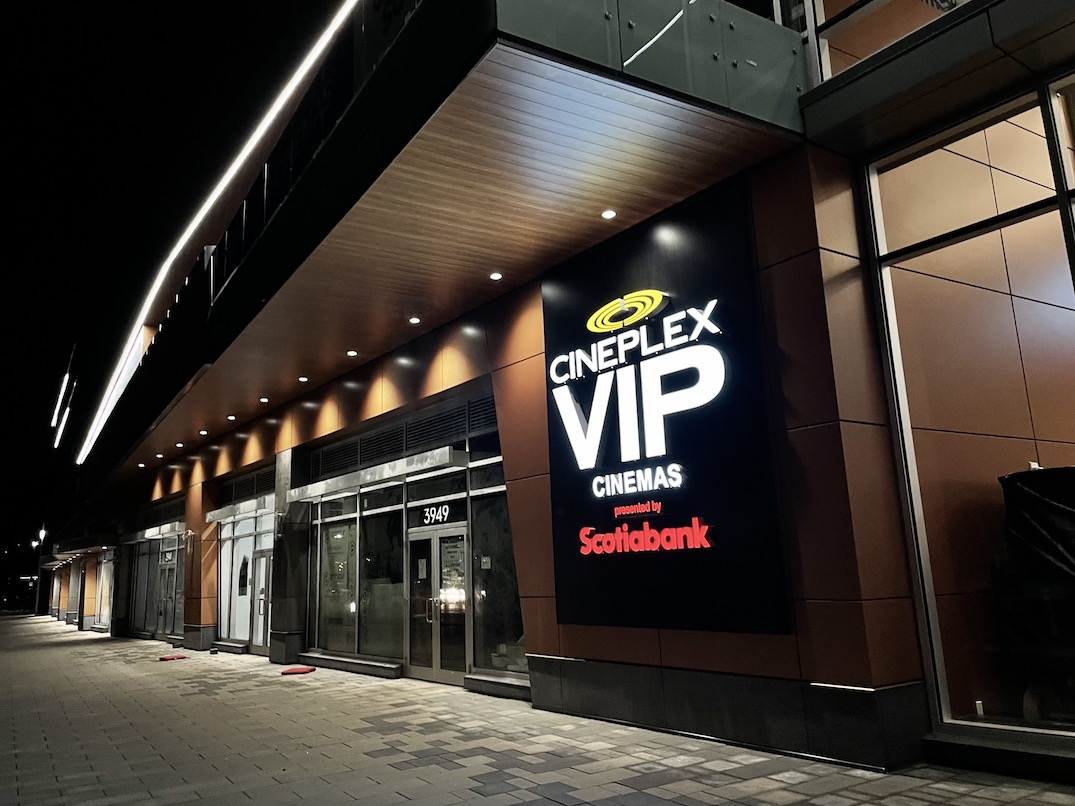 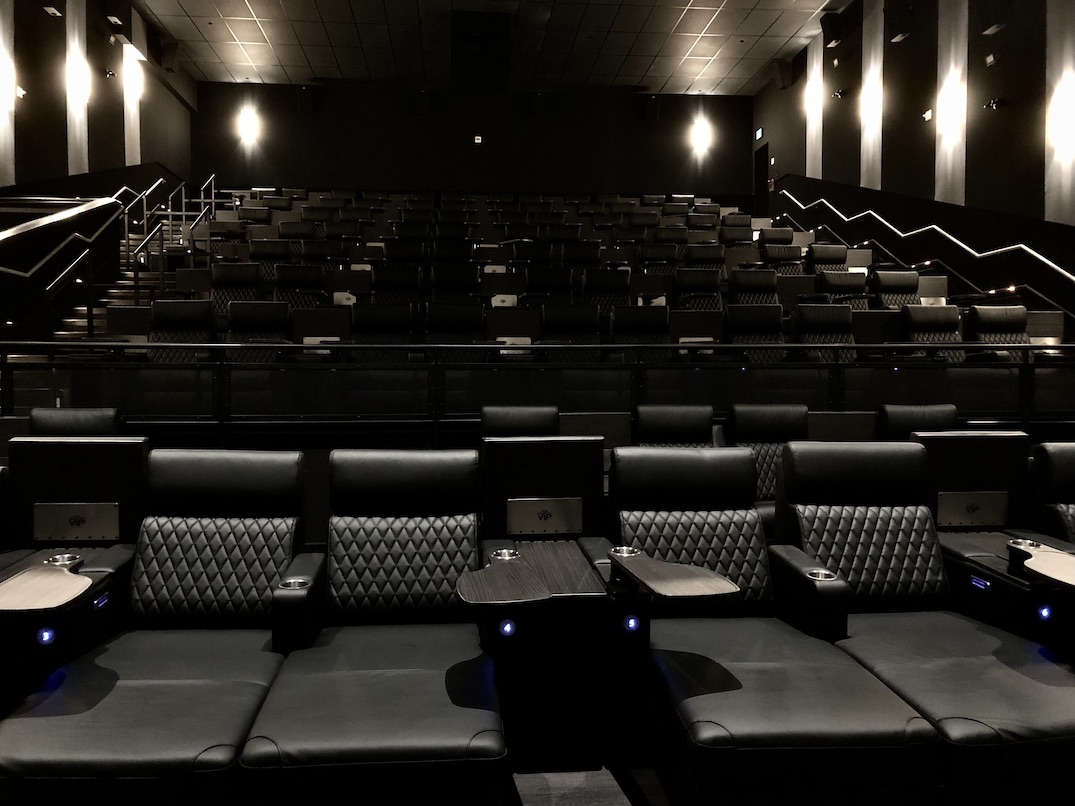 Scott Whetham, executive director, Alberta South operations, Cineplex, told Daily Hive that the new cinema is only their third location in Canada to be exclusively VIP, bringing a unique experience to this up-and-coming northwest Calgary community.

“People travel from all across Calgary to come to Seton for the VIP experience,” said Whetham. “We’re excited to be in the northwest so people don’t have to make that commute all the time.”

The 22,500-square-foot, adults-only cinema features an 80-seat lounge, where guests can grab dinner or drinks before and after their movie. The lounge even has an outdoor patio space, and the cinema location boasts mountain views. 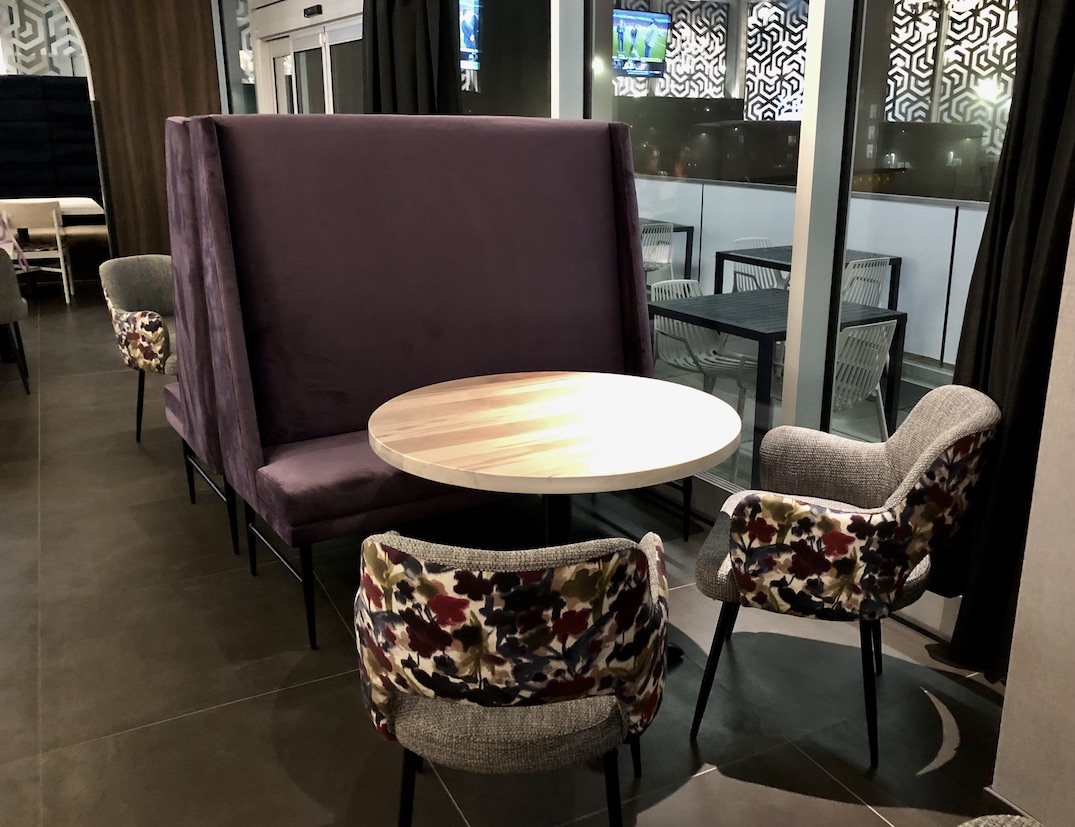 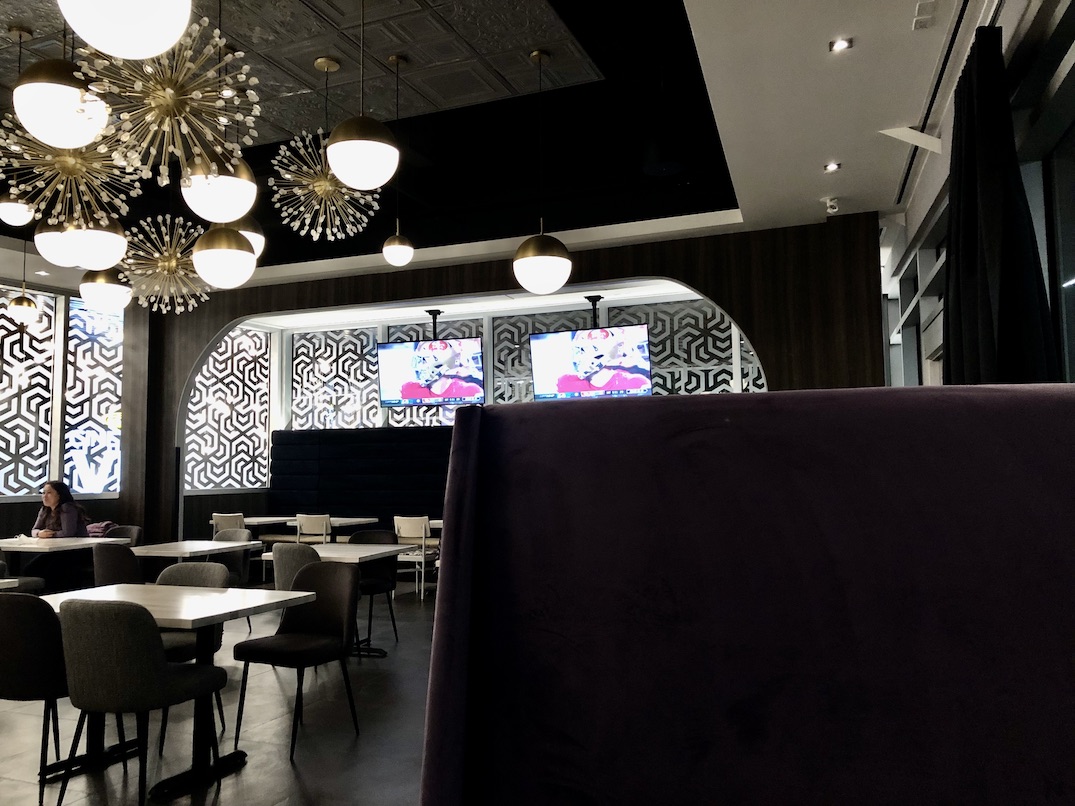 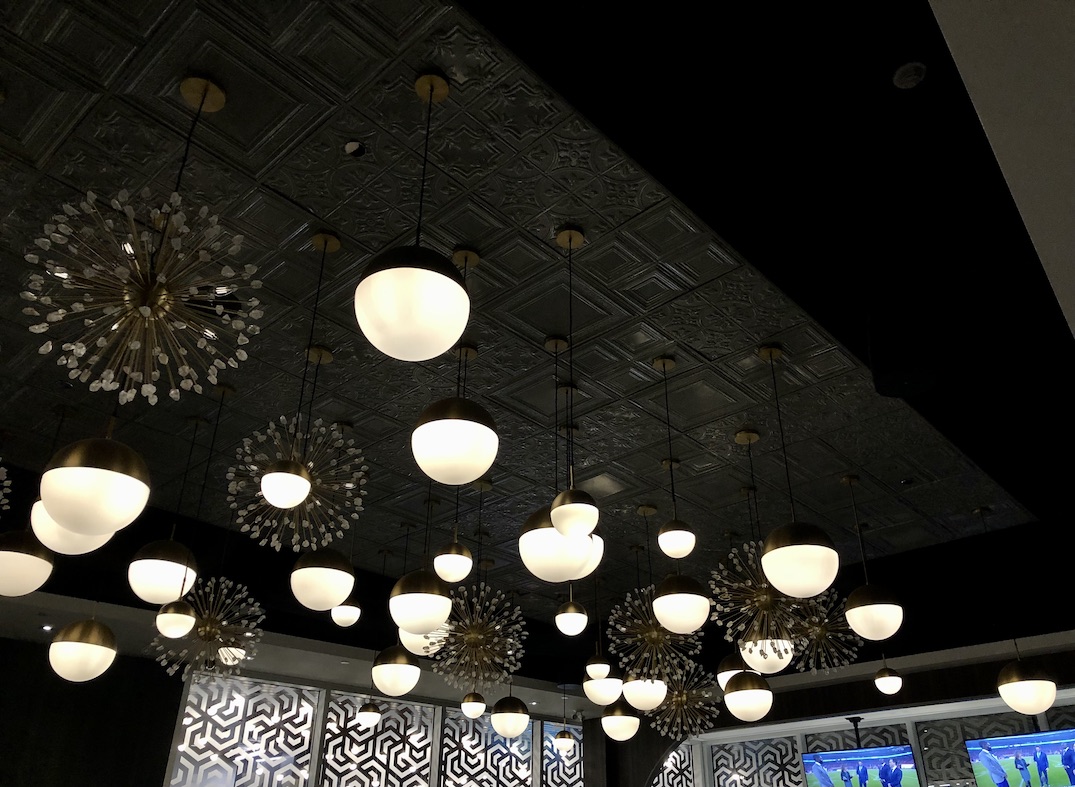 As with all Cineplex VIP Cinemas, the theatre will offer in-seat service within the auditoriums, where large tray tables make it easy to enjoy a deluxe snack with your movie. 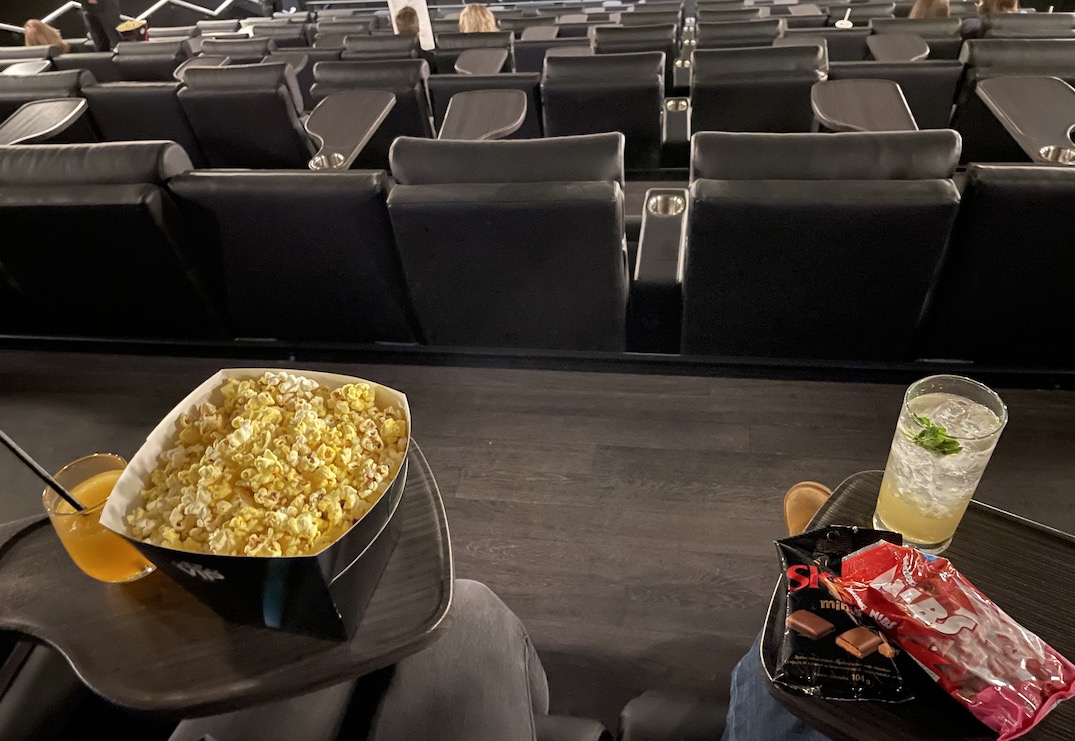 Although the location doesn’t have a traditional movie theatre concession booth, guests can order food and drinks in the lounge to be delivered right to their seats in the auditorium where they’ll be watching their movie – talk about good service!

The cinema’s menu features items such as burgers, poutine, tacos and quesadillas, salads, boneless wings, wraps, and pizzas, along with appetizers, traditional movie candy and popcorn, and some decadent desserts, like the Salted Butterscotch Brownie. 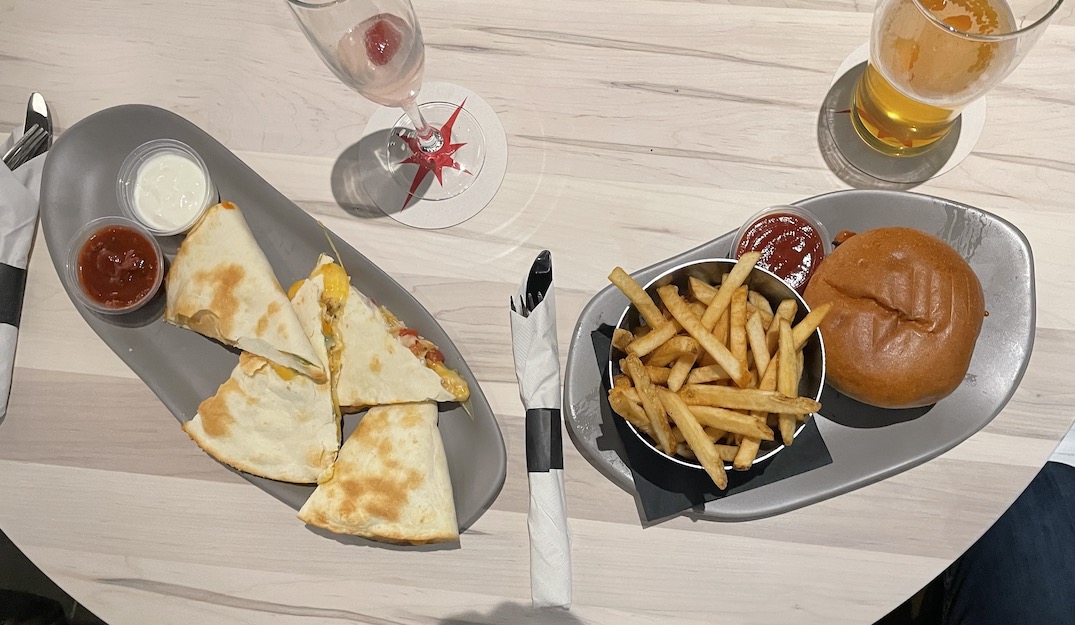 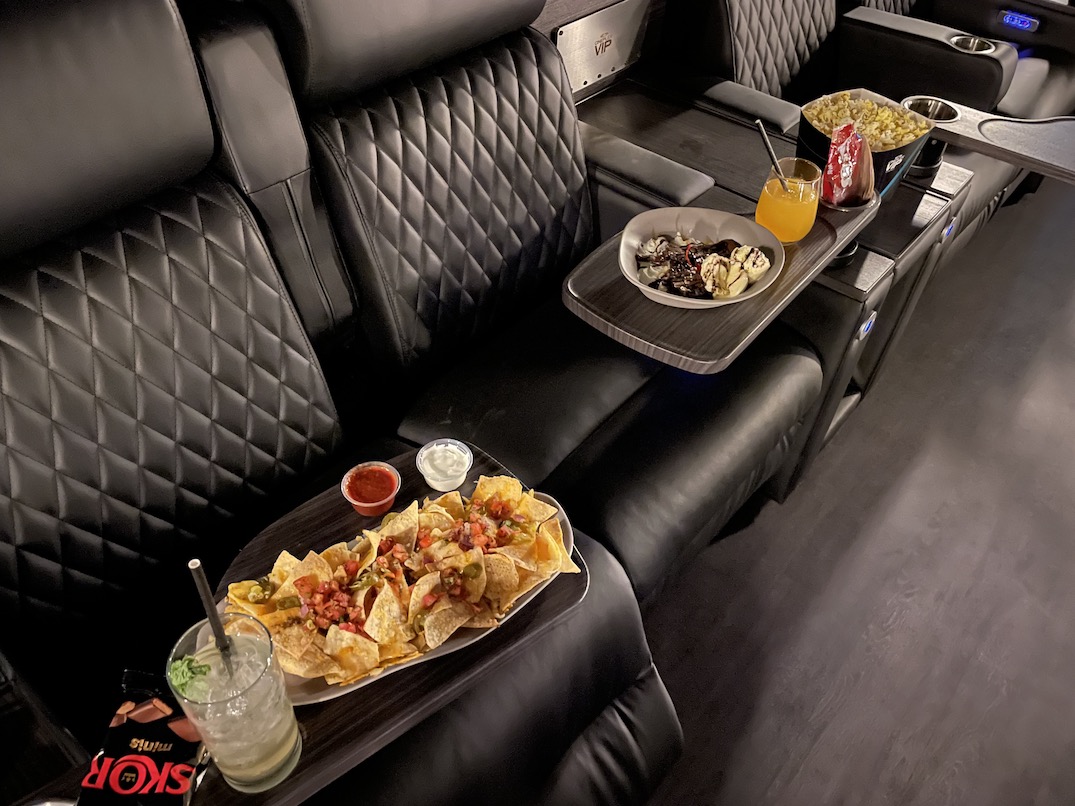 The drink menu lists handcrafted cocktails, wine and sangria, beer (including local brews on tap!), hard seltzer, and cider. Fun frozen concoctions and fishbowl cocktails round out the beverage offerings. 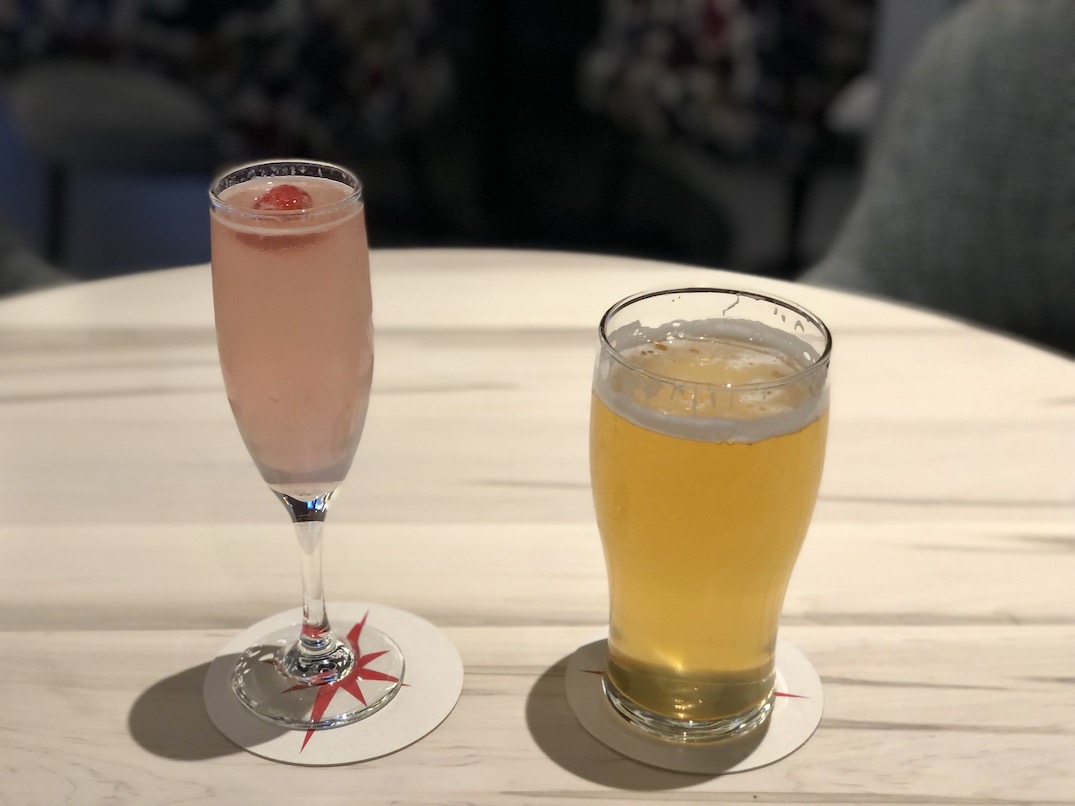 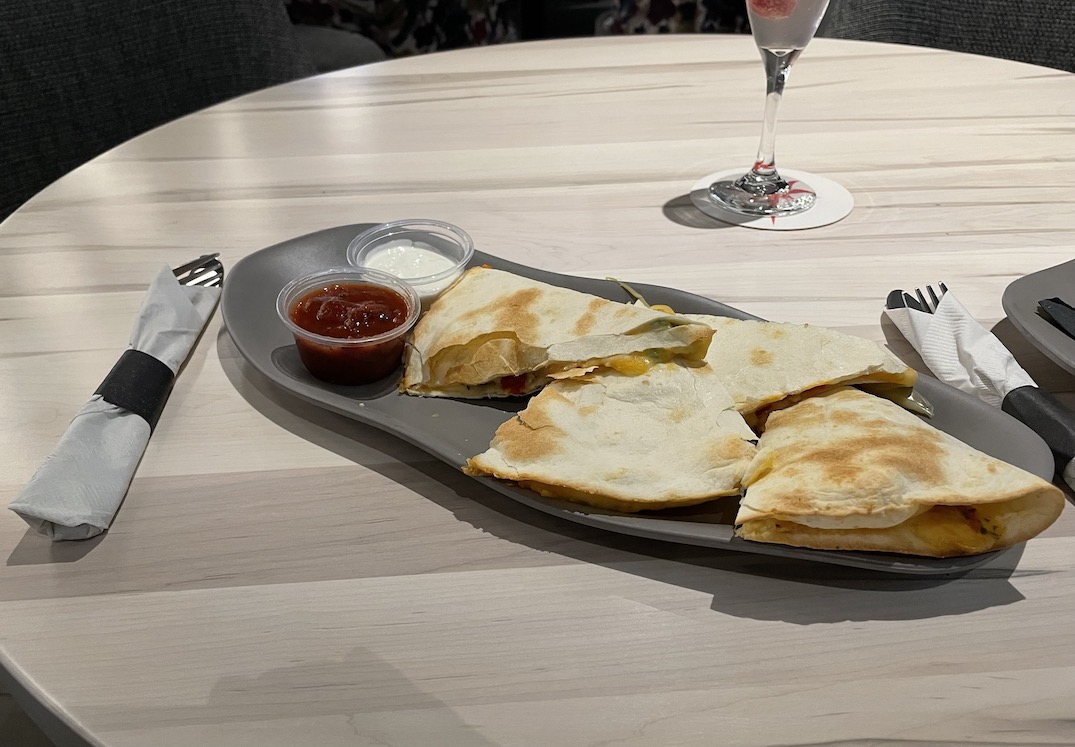 In addition to being the only exclusively VIP Cineplex theatre in the province, Whetham told Daily Hive that the new cinema will use all-laser projection in its auditoriums, whereas other Alberta Cineplex locations use methods such as xenon bulbs.

With all-laser projection, movie-lovers can expect screen brightness and contrast that’s superior to what they see with other methods.

Calgarians will be the first to enjoy Cineplex’s newly designed recliners: extremely comfortable, deluxe lounge chair-style seating with quilted backs. Guests can control their chair’s headrest and footrest with in-seat buttons. There’s even a heating function in the chair, with two different temperature settings to choose from.

And to make the often-overlooked front row theatre seating more desirable, the first row of each auditorium uses chaise-style lounge chairs that fully recline, making your experience that much more comfortable and turning these into the “best seats in the house.” 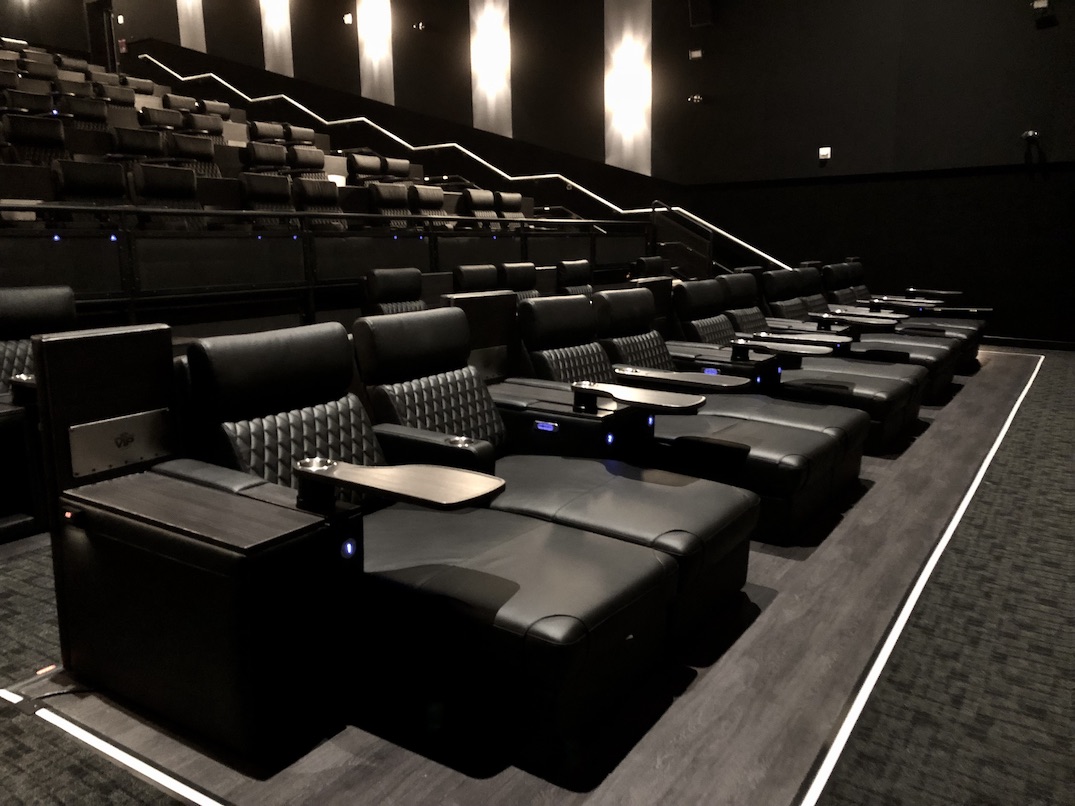 The hallway that leads to the cinema’s auditoriums is lined with framed stills from a variety of movies, each with a descriptive placard, making for a great conversation piece as guests make their way to their movie. 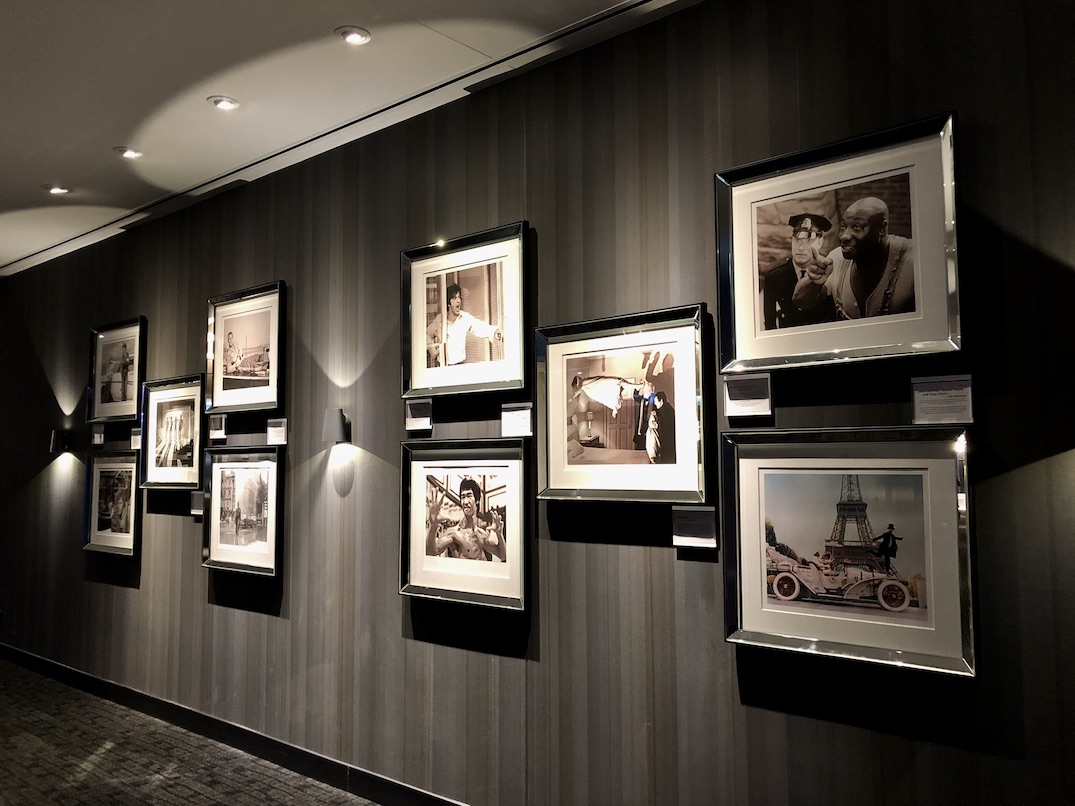 Movie-goers can experience this luxurious night out starting Wednesday, November 17, aligning nearly perfectly with the release of a number of highly anticipated films.

As part of its opening, Cineplex VIP Cinemas University District will be showing new releases The Eternals and Dune (now playing), with Ghostbusters: Afterlife and King Richard opening November 19, and House of Gucci coming November 24. 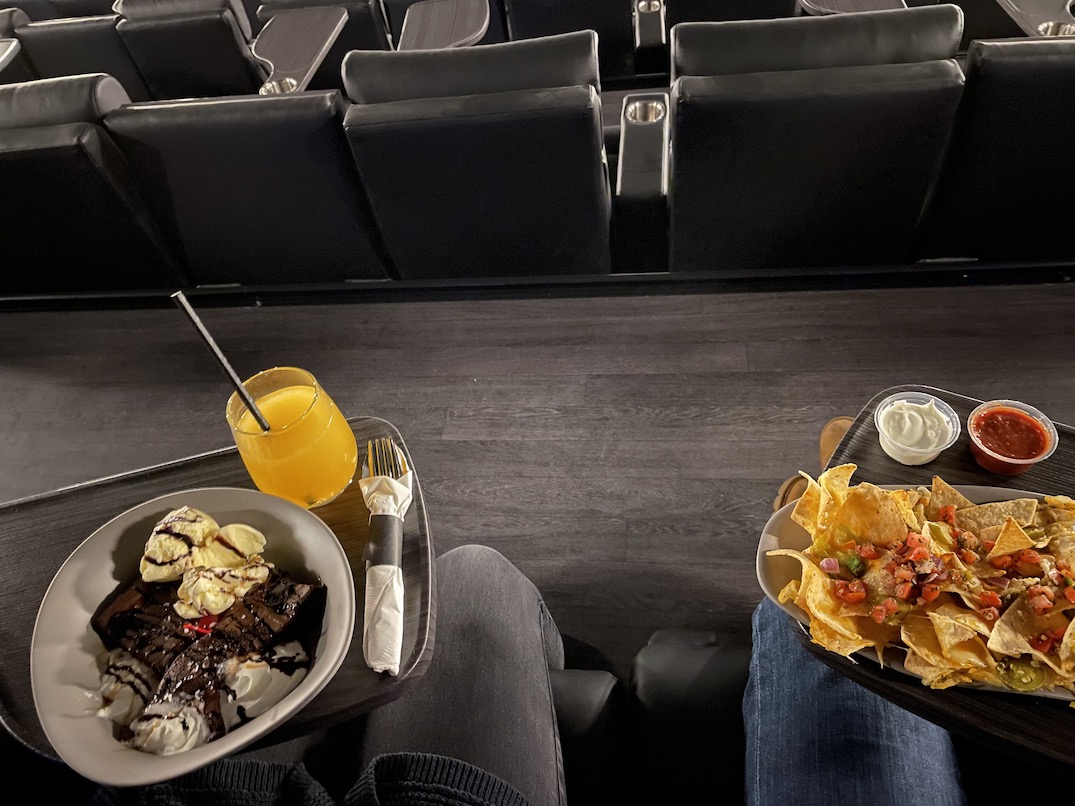 Tickets and showtimes are available at the theatre, through the Cineplex app and at cineplex.com.