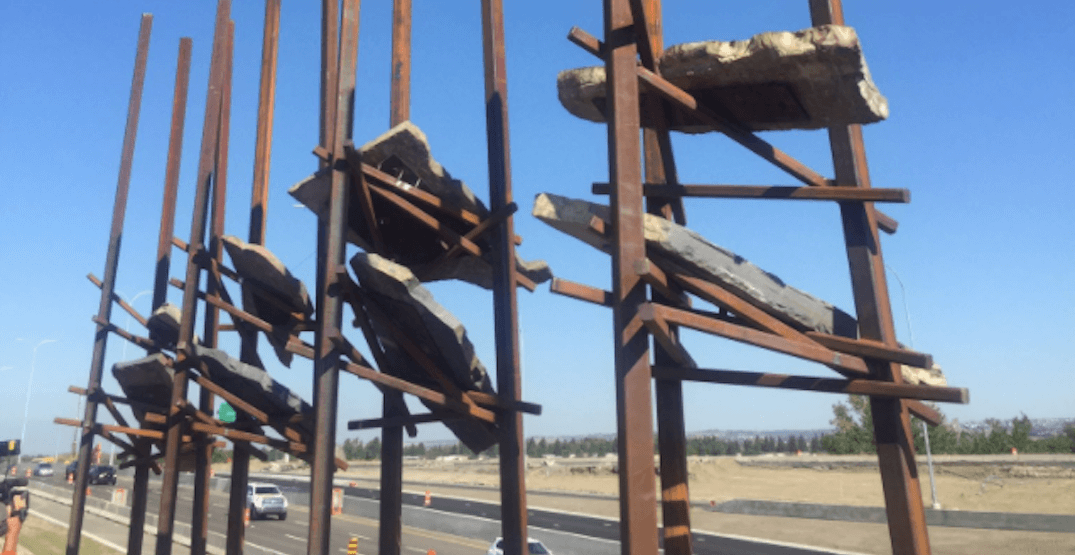 There have been a good handful of missteps in Calgary’s public art history, but few have reached the levels of infamy held by Bowfort Towers.

This piece of public art, costing half a million dollars is surrounded by public outrage and cries of cultural insensitivity.

You literally can’t do a Google search of the thing without finding headlines like “Artist says he’s sorry if anyone feels offended,” “Tsuut’ina Nation wants to see Bowfort Towers art installation modified,” or “Bowfort Towers ‘never meant to be an Indigenous artwork.'”

Completed last summer to the tune of $500,000, this piece was created by artist Del Geist who, according to his website, has been making public art for over 30 years and has made major art pieces across the US and Europe.

Most of Geist’s sculptures are very similar to Bowfort towers, at least conceptually, using pieces of stone, held up either by wood braces or metal girders.

According to Geist’s website, Bowfort Towers is part of his Stone Carriage series alongside other pieces built around the globe, and always using local stone significant to the area that the sculpture is located.

“The concept was to give Calgarians a focal image towards their environmental history by using the actual stones which tell wonderful very ancient stories,” says the artist’s website.

“We met with leaders from the First Nations community and were advised that the number four holds great symbolic importance,” the post continued. “Therefore, these four towers respectfully align with the proper numerical symbolism.”

This last point is a major player in the controversy, as members of First Nations communities drew comparisons to traditional burial scaffolds, and found the idea of those standing on the side of a major roadway hugely inappropriate.

Mayor Naheed Nenshi and the Treaty 7 Chiefs came out with a joint statement shortly after the project was unveiled.

“The arts can help to strengthen the relationship between indigenous and non-indigenous people,” the statement reads.

“However, given the significance of the land, and following the guidelines of the City’s new Indigenous Policy, the City asked the artist (late in the design process) to seek the expertise of a Treaty 7 traditional knowledge keeper to advise on the project.”

Unfortunately for Bowfort Towers, the perceived cultural insensitivity is only half of the problems it faces. There’s also the tiny problem that many people think it’s just plain ugly.

Can we just take this down and repurpose the girders into a shed and the rocks into paving stones or something? #bowforttowers pic.twitter.com/cJmFMTF4Ph

The project has even inspired a couple of joke twitter accounts. Not only that, but the public backlash has been so large that it was part of what inspired the city to seek changes to the public art program entirely.