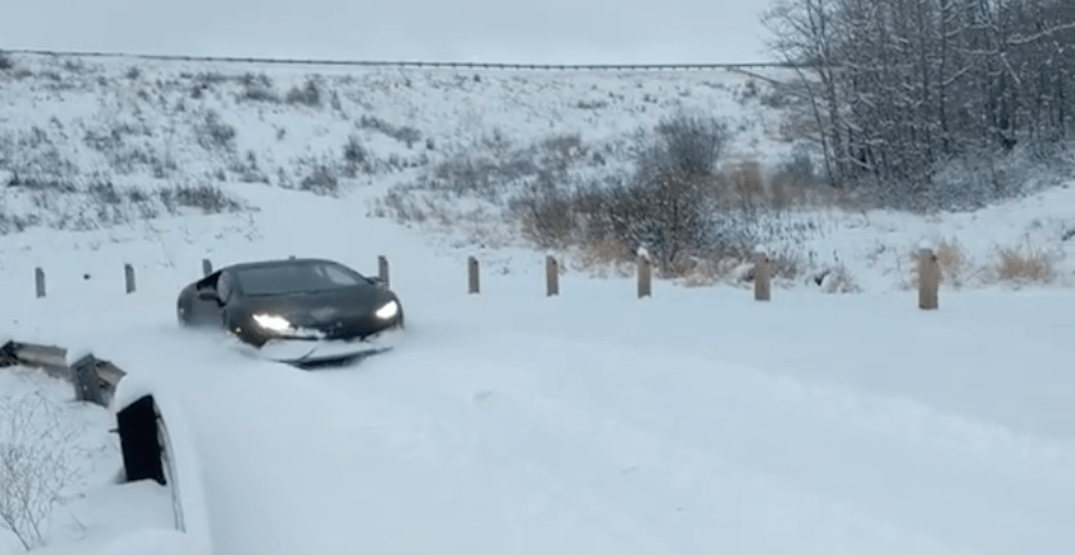 Lamborghini in the snow (oraizen88/Instagram)

You’d think that the dirty snow, hidden rocks, and plunging temperatures of an Albertan winter would be enough force all sports car owners’ rides into a seasonal hibernation, but that’s apparently not so for one Edmontonian.

Oren Zamir, a regional manager for Fluent Home Security, bought a Lamborghini last August and doesn’t have any plans of putting it away for the colder months.

“[I decided] that if I was going to spend my best money on a car like that,” Zamir said in a YouTube video, “I’m definitely going to drive it — even through the Canadian winter, and the cold temperatures, and blizzards, and crazy storms.”

“I’ve got to tell you that this car drives amazingly. I actually think it drives better than my diesel truck and my wife’s Range Rover all together.”

Zamir created an Instagram account after one of his managers at work told him that “Facebook is for old people,” and has since been uploading videos and photos of him taking to the snowy streets of Edmonton in his Lamborghini Huracan.

Some luxury car owners may balk at Zamir’s seeming disregard for the potential dents and scratches that inevitably come with doing doughnuts in a Lambo, but a video posted to Instagram shows that he takes those imperfections with a smile.

“I guess when you push your limits sometimes there is a price,” he said in the video, showing that his bumper had been cracked after he drove his car into a snowbank.

There were a few other scratches along the side of his car, which he brushed off as “minor scratches unless you want to fix it — then it’s very expensive.”

Still, even with the blemishes here and there on his $300,000+ car, Zamir stated in the video that nothing was going to stop him from enjoying the ride he worked so hard to get.

“At least we got out and had some fun [doing doughnuts], and that makes everything better,” he said of the scratches. “That doesn’t stop the journey, that is never stopping the journey.”