Lowe’s Canada is looking to hire for more than 700 jobs in Alberta next month.

According to the company, in preparation for home improvement’s busiest season, Lowe’s Canada will be looking to fill more than 6,350 full-time, part-time, and seasonal positions across the country.

Interested candidates need only head into their preferred store between 9 am and 4 pm on February 23 to learn more about the various positions.

Besides its approximately 790 jobs in Alberta, the company will also be looking for 1,950 new employees in Quebec, about 2,600 in Ontario, and over 500 in BC. 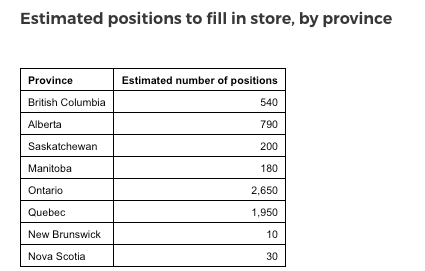 This news comes following the company’s announcement that it would be closing up to 31 Canadian stores, and close to 20 more south of the border.

“While decisions that impact our associates are never easy, the store closures are a necessary step in our strategic reassessment as we focus on building a stronger business,” said Marvin R. Ellison, Lowe’s president and CEO, in a statement.

“We believe our people are the foundation of our business and essential to our future growth, and we are making every effort to transition impacted associates to nearby Lowe’s stores.”

Lowe’s expects to close the impacted stores by February 1, 2019.