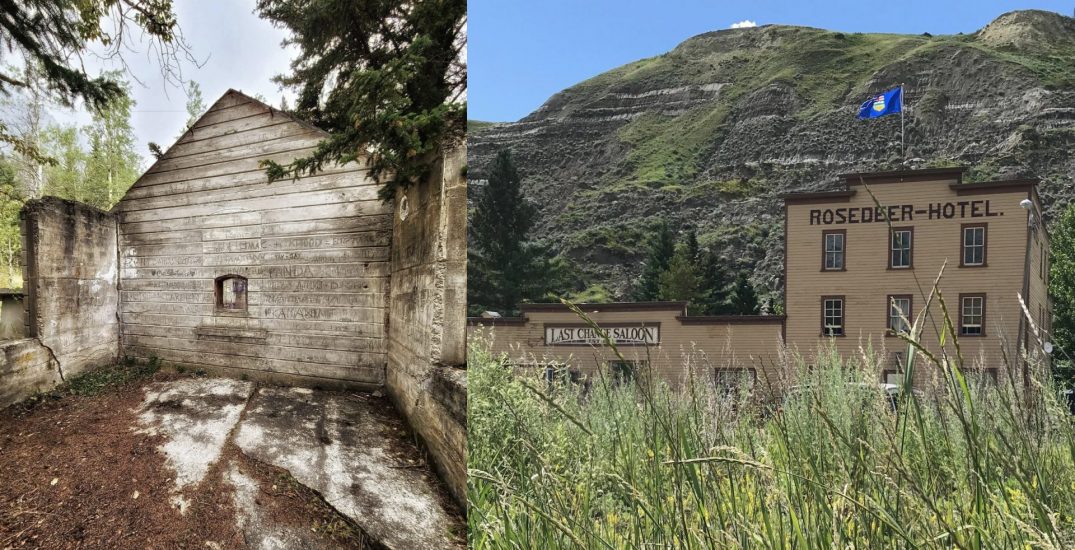 Alberta is home to lots of beautiful places: the Rocky Mountains, the Badlands, the wide-open prairies, along with some vibrant cities and ghost towns.

Luckily, there are plenty of abandoned places and ghost towns across the province where you can wander around and scare yourself to your heart’s content. They may not be officially haunted, but you’ll probably still get goosebumps.

From the slightly neglected to the full-on abandoned, each of these Alberta ghost towns definitely brings spooky vibes.

Many of these spots are the result of a booming coal industry that was deserted when operations failed, resources were depleted, or the world simply moved on to other forms of energy. Whatever the reason, it’s always fun to explore somewhere new, especially when you don’t know what (or who) you may stumble across.

Here are 17 ghost towns to check out on your next Alberta road trip.

A post shared by In Memory Of Tye Carnelli (@prairieeyes)

According to the Ghost Towns website, Retlaw was expected to be a major town in its area, and in the early 1900s it was a hub of activity, with a pool hall, railway, church, hotel, and more, but when irrigation was brought to the neighbouring town of Vauxhall in the 1920s, Retlaw was soon abandoned.

This town closed up in 1955, leaving behind the remnants of buildings and mining equipment. There had once been about 3,500 citizens living in the area, which is easily accessible with two-wheel drive.

What you’ll find: The original townsite with many old buildings still intact, but boarded up
Distance from Calgary: 305 km (three hour and 15 minute drive)
Distance from Edmonton: 301 km (three-hour drive)

A post shared by In Memory Of Tye Carnelli (@prairieeyes)

This southern Alberta town was booming in the early 20th century, but a decade of dust storms, drought, and grasshoppers left it dry. Today, the tiny hamlet has a few current residents, with many of the original buildings still standing to check out.

According to the Ghost Towns of Alberta website, there are just two citizens left in Nemiskam. This spot is located nearly dead centre in a group of pioneer communities that were created every 10 to 12 kilometres along the rail line paralleling Highway 61. When the community’s only remaining grain elevator was toppled in the 1990s, Nemiskam lost its last notable landmark for those looking to visit the area.

This ghost town has come back to life – a little. There are about 12 residents in Rowley, and they’ve restored many of the old pioneer buildings, including Sam’s Saloon, which is open on select days and makes for an excellent spot to grab a slice of pizza and check out some entertainment.

What you’ll find: Many old buildings have been restored, but there are still lots of abandoned structures to visit in Rowley and area
Distance from Calgary: 171 km (two-hour drive)
Distance from Edmonton: 251 km (two hour and 45 minute drive)

One of many CPR sites, a number of Etzikom’s residents perished in the 1918 influenza epidemic. Today, visitors will find the thriving Etzikom Museum & Canadian Historic Windmill Interpretive Centre, featuring windmills along with plenty of other unique historic collections and displays.

A post shared by Ghost Towns Of Alberta (@albertaghosttowns)

Located near Red Deer, Fort Normandeau dates back to 1885 when, instead of building his own, Lieutenant Normandeau commandeered a hotel and turned it into a fort. Today, visitors to the area will find the restored fort and historic site celebrating the history of Red Deer and the three founding cultures.

At one point in time, Bulwark was bustling as the heart of a huge grain district with three lumberyards, two general stores, two churches, a hardware store, a Bank of Commerce, garage, drug store, dance hall, pool room, and five grain elevators. Today, it sits empty, with abandoned buildings, an old cemetery, and a few houses.

A post shared by Ruchi and Ponyboy Show (@ruchiandpony)

Located in Banff National Park, Bankhead was established in the early 20th century as a place to supply coal for the locomotives of the Canadian Pacific Railway. At its busiest, the community boasted a population of 1,500 people; however, the mine site’s poor quality of coal and continuous labour strikes forced its closure in 1922, and many of its residents chose to move to the town of Banff.

To get to Wayne, you’ll cross 11 historic bridges through the Alberta Badlands, making the journey a part of the destination. About 40 residents still live in the area, and visitors will find a hotel, saloon, and ice cream shop in the townsite.

Located just minutes from the ghost town of Bankhead and the Banff townsite, Minnewanka Landing was a coal mining community during the first world war. According to the Ghost Towns website, in the late 1930s, the Canadian Government wanted a new source of power for Calgary, and the town was fully flooded over by a new dam, which remains the main road to Lake Minnwanka to this day.

Four miles north of Banff is what used to be the coal mining community of Anthracite. Skip the touristy lakes on your next trip into the Rockies, because this place hasn’t been crowded since the 1800s. All that remains is a grave marker for a child who drowned in a river all those years ago.

Many of the original Buffalo Jump Station structures still remain, and it used to be a CPR stopping point along the Trans-Canada Highway. The boarded up building was last used in the 1970s, and was named after an abandoned arts and crafts store just metres away. The railway station has since been moved to the town of Cochrane, Alberta, alongside Highway 1A, where it still remains in its original condition.

Named after a family of Mormon refugees, a number of log buildings were left behind when Caldwell was officially abandoned back in the 1950s. This tricky-to-find spot is located in the southwest corner of Alberta.

Those travelling on Highway 21 should make a stop at the Alberta Government campsite on the south side of the Battle River. Duhamel is an old Laboucane settlement and is the former home of a large Metis colony.

Both of these forts still stand along the Saskatchewan River after having been built by competing fur trade companies.

If you’re looking for more chills and thrills, be sure to check out the Ghost Towns website for a list of more than 50 locations to explore in Alberta.