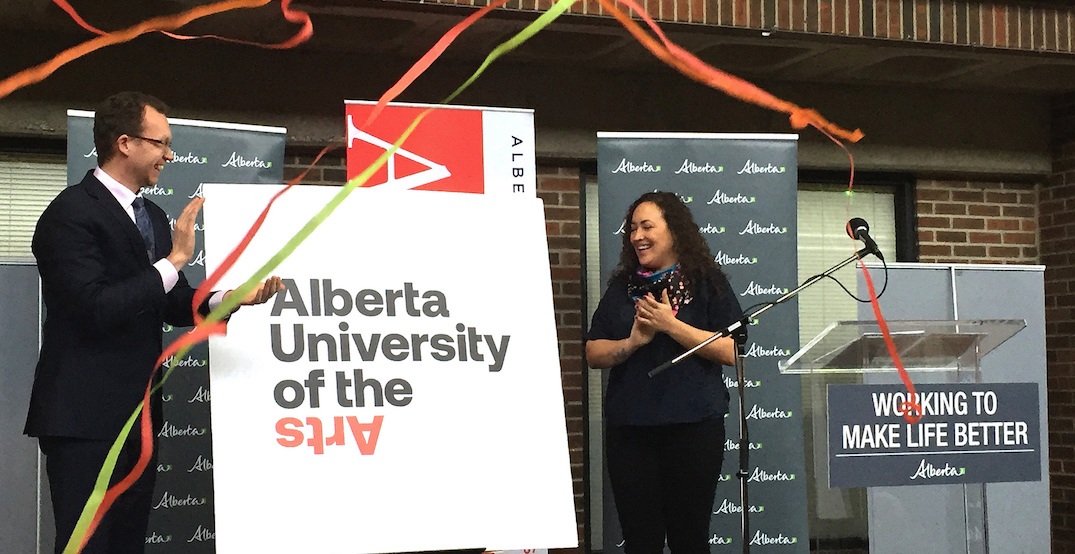 Alberta University of the Arts reveal (Government of Alberta)

The Alberta College of Art and Design has officially gotten an upgrade.

The post-secondary institution formerly known as ACAD unveiled its new name and design at an event on Thursday, becoming known as the Alberta University of the Arts.

With the shift in designation from college to university, it becomes the first (and only) university in the province that is devoted exclusively to the arts.

“Creative minds have come to Calgary for nearly a century to launch international careers in graphic design, fashion, and traditional media,” said Alberta’s Minister of Advanced Education Marlin Schmidt in a release.

“By granting this iconic school university status, we’re cementing an already sterling global reputation. And by investing in AUArts, we’re ensuring it remains a destination for Alberta’s artists, designers, and creative leaders.”

It was officially announced last year that the Alberta College of Art and Design would become a university in 2019, though it wasn’t until this January 17 that the name and logo were unveiled to the public.

The change was due in part to the number and quality of degree programs available at the institution, including a bachelor of fine arts, bachelor of design, and master’s in fine arts.

“This is a historic and most exciting moment for our 92-year-old post-secondary institution,” said Alberta University of the Arts President and CEO, Daniel Doz, in the release.

“We have been offering professional degrees in fine art, craft and design for decades, and this coming May, students set to graduate will now proudly convocate from Alberta University of the Arts.”

The Government of Alberta release states that the new name and status will formally come into effect as of Friday, February 1.