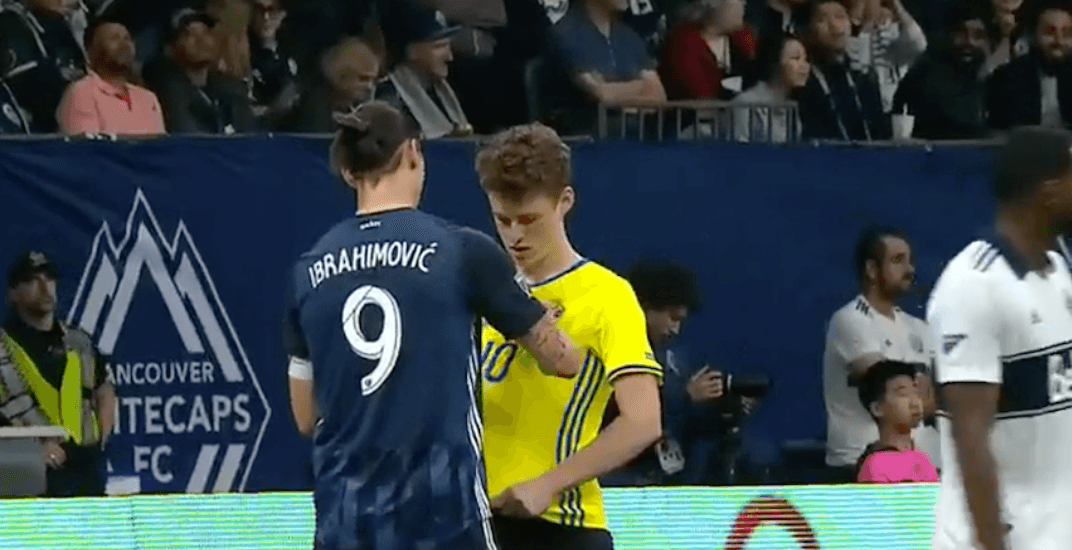 It was the Zlatan Ibrahimovic show at BC Place on Friday night. The 37-year-old football superstar made his first appearance in Vancouver, and he did not disappoint in a 2-0 LA Galaxy win over Vancouver Whitecaps FC.

A sold out crowd of 22,120 fans cheered Ibrahimovic when he was announced during pregame introductions and the Swede gave the fans what they came to see. Ibrahimovic set up the match winner, and scored his fourth goal of the season on a brilliant flying kick.

When Ibrahimovic comes to town, fans, players, and media all want to see him. They want to breath the same air, and be in the same space as Zlatan.

That’s exactly what one fan did.

A lad in a Sweden kit ran onto the pitch to meet his hero. The fan was able to approach Ibrahimovic with ease, as BC Place security was slow to react.

“He came in, he wanted my autograph,” Ibrahimovic told Daily Hive post-match. “I signed for him, and I said go out before they start to run after you. I think he went out, I didn’t follow-up.

“But at least he got my signature.”

Zlatan could have easily had a second half hat-trick. Whitecaps goalkeeper Maxime Crepeau spilled the ball into Ibrahimovic’s path, and lucky for Vancouver. Ibrahimovic showed his rare human side, and sent his attempt wide of the target.

Moments later Ibrahimovic had another glorious opportunity to add his name to the score-sheet. He appeared to find the back of the net, however, the flag was up, and to the disappointment of Ibra, his goal was called back on an offside.

While past big name players who made the move to MLS like Thierry Henry, Kaka, Didier Drogba, and Steve Gerrard never set foot at BC Place, Ibrahimovic wasn’t afraid of playing on turf.

“I mean I’m against turf also,” Ibrahimovic explained post-match. “Football was built up on normal grass. Turf is coming more and more. I’m totally against the turf, but I said I would come and play.

“This turf was better on the other ones I’ve been playing on in MLS. To give an excuse on the turf, I don’t like to do that. When we play, we play, but I’m totally against turf. It’s an easy way to save money for the owners.”

Ibrahimovic stole the show, and that didn’t sit well with Whitecaps midfielder Felipe. The Brazilian took issue with who the home crowd came to cheer.

Felipe Martins not too happy that the BC Place crowd is cheering for Zlatan. "I think this is kind of sad." #VANvLA pic.twitter.com/xMnGF2DgB1

But fans were there to see the show and Zlatan gave them one.

Or, in his words:

Vancouver you are welcome