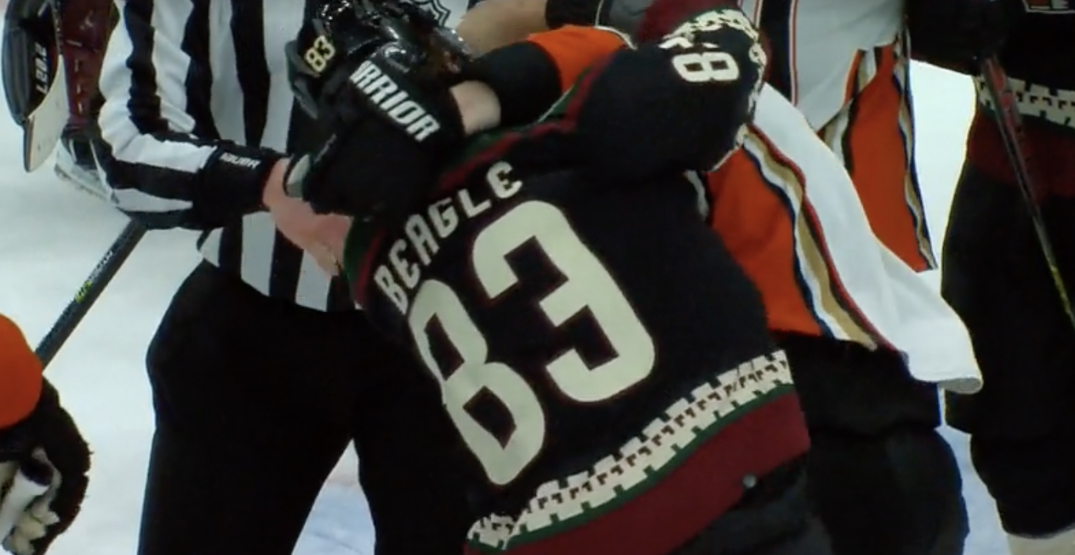 He did it without addressing Beagle directly.

“I get that you’re going to hit me in the back, but you don’t punch a guy when he’s down, especially a [31]-goal scorer in the NHL who’s a superstar,” Zegras said, accoriding to PHNX.

“It’s humiliating and I think he should be f****** punished.” pic.twitter.com/yfeZRdNh4Z

The Ducks led the Coyotes 5-0 late in the third period when Zegras tried to poke a loose puck by Coyotes goaltender Josef Korenar. Beagle cross-checked Zegras in the back, and when Terry came to his linemate’s defence, Beagle dropped the gloves and repeatedly punched Terry in the face.

Earlier in the game, Zegras scored on “The Michigan,” a lacrosse-style goal, after he failed to convert on a shot he pulled between his own legs.

“I’m not going to name the player, but I get that he’s going to punch him maybe once, but the fact that he’s down and he’s not engaged in a fight, you’re going to hit him three more times? I think it’s embarrassing,” Zegras said. “I think he should be embarrassed…I’m embarrassed it even got that far.

“I appreciate Troy sticking up for me, because I think that’s a nonsense cross-check with two minutes left in a 5-0 game. I’m embarrassed for whoever that was…I’m not going to say his name…and I think the league should step in here and do something about it.”

Beagle will not face supplemental discipline, according to Craig Morgan.