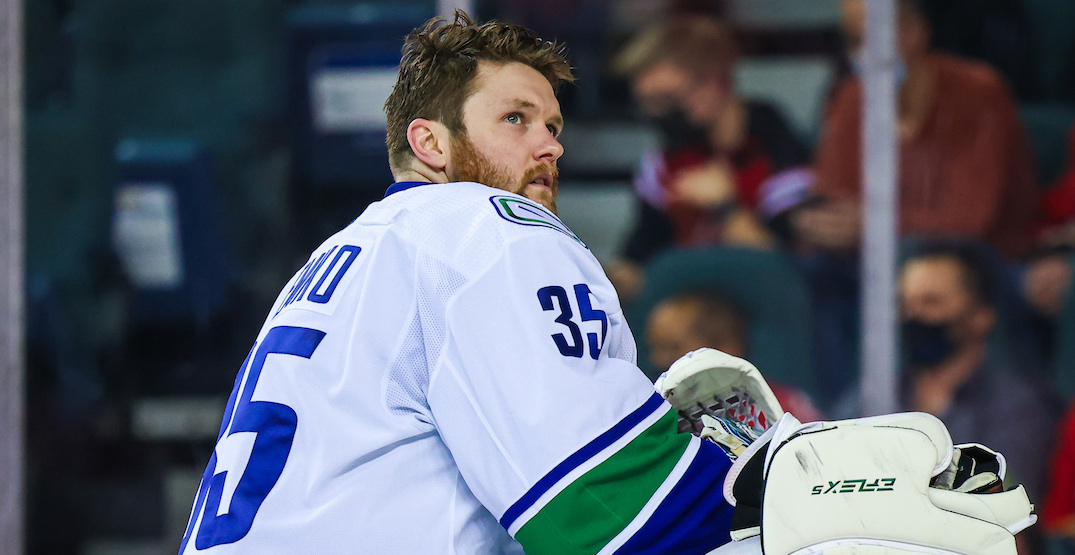 You have to give Thatcher Demko a ton of credit.

Coming into this season, the 25-year-old had played 72 NHL games during the first four seasons of his career. He’d also never played more than 35 games in a campaign.

This season, he has already played 55 games.

Jacob Markstrom was the last Canucks goalie to play 60 games in a season, hitting that mark twice during his time in Vancouver.

The last netminder to play more than 60 games in a season for the Canucks was Roberto Luongo, who played 68 games back in 2009-10.

Demko has earned the right to play a ton, but is fatigue finally settling in for the star netminder?

He doesn’t seem to think so.

“I don’t think about that kind of stuff,” Demko told the media when asked about potential fatigue following the Canucks’ win against the Dallas Stars last weekend.

“I know you guys talk about it a lot so you can keep doing that. I just try to get up every morning and do my best, whatever position we’re in.

“It’s just my job to show up when they need me to play.”

Although Demko doesn’t believe fatigue has been a factor in his play recently, the numbers tell a different story.

The Canucks entered the month of March hanging around the fringes of the playoff picture. Finishing March strong would have kept them in the race heading into the final month of the season.

Instead, the Canucks finished March with a 6-5-3 record.

Now, most projections put the Canucks playoff odds somewhere around 3%.

For Demko, he’s been the Canucks MVP and one of the best goalies in the league throughout the season.

In March however, he went from Vezina-worthy to average.

Here’s a look at his basic statistics per month this season.

From December through until the end of February, these numbers highlight a goalie who was giving his team above-average netminding on a nightly basis.

Those who have actually spent time watching the Canucks realize that Demko has been much more than simple “above average.”

Bruce Boudreau deserves some credit for the team’s 8-0-1 run in December but really, it was Demko who was the team’s MVP.

He finished with a 7-1-0 record along with a .946 save percentage and was later named the third star of the month for December.

Demko continued his solid play in January and February, but during the last month, when the Canucks desperately needed wins to stay in the playoff picture, Demko posted a .908 save percentage.

The number of even-strength goals allowed by Demko in March highlights the dip in his play.

In March, he allowed 30 even-strength tallies, an average of 2.5 per game.

“It feels like there’s been some weird goals going in on me lately,” Demko said post-game last Saturday.

That trend continued on Wednesday against St. Louis.

Whether that’s fatigue or simply bad luck is a matter of opinion, but it’s clear that Demko isn’t the same miracle worker that he was earlier in the season.

Well, aside from that moment against the Stars.

Even though Demko has come back down to Earth a bit over the last month, his 22.56 goals saved above average (GSAA) still leads the entire league this season.

Still, it’s a telling sign that despite Demko playing like a Vezina-calibre goaltender for most of the season, the Canucks are virtually out of the playoff race with a month left.

It makes this quote from Canucks President Jim Rutherford a very telling one as this team heads towards the offseason.

“We win a number of games because we have a franchise goalie,” Rutherford told Sportsnet 650 back in February. “He makes up for a lot of our shortcomings.”

That he does, Jim.