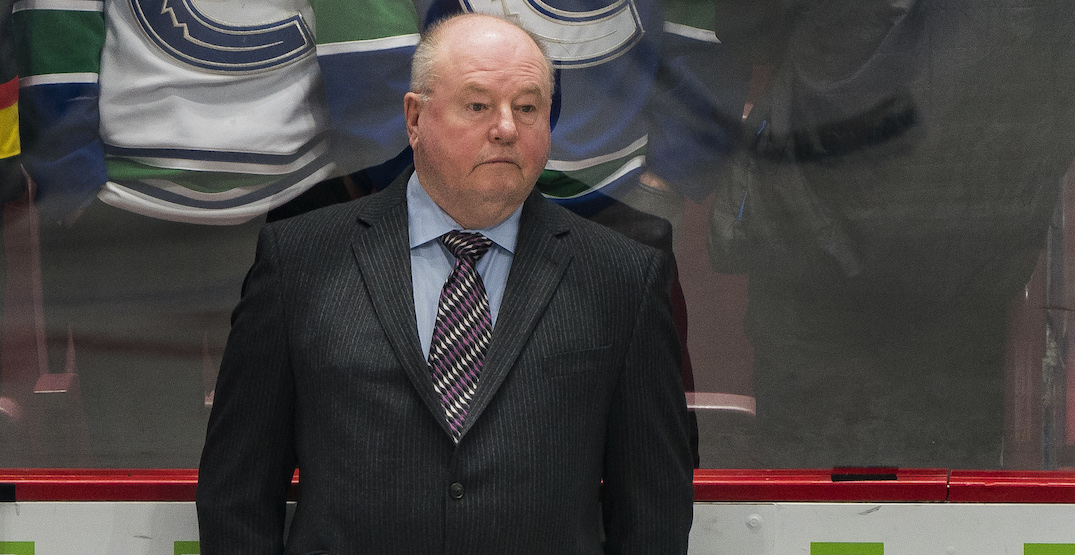 They wouldn’t. They couldn’t.

The Vancouver Canucks under Bruce Boudreau have surpassed everyone’s reasonable expectations when he was hired back on December 5. The team, as you’ll recall, was a mess when he took over.

The Canucks were 8-15-2 when Boudreau was hired as the team’s new head coach, giving Vancouver the fourth-worst points percentage (.360) in the NHL. A fan had just thrown a Canucks jersey onto the ice at Rogers Arena in protest.

Boudreau won his first seven games behind the Canucks bench, and has led his team to a 24-13-7 record since his debut on December 6. That’s good for the 13th-best points percentage (.625) in the league during that timespan.

Boudreau’s future with the team appears to be uncertain. The 67-year-old bench boss signed a one-year contract with a team option, meaning he’s only guaranteed this season.

Given his success, most observers assumed the Canucks would pick up that option.

But according to Sportsnet’s Elliotte Friedman, there’s a chance Boudreau won’t be back with the Canucks again next season.

“I’ve been told the language of the contract is unique, and that there are protections for Boudreau in it. However, what I think it also means is that there’s a possibility that Boudreau might not be coming back next year,” Friedman said on the 32 Thoughts Podcast. “It hardly seems like a 100% foregone conclusion that he’s coming back next year, which I find incredibly hard to believe.”

🏒 32 Thoughts Podcast 🏒@JeffMarek & @FriedgeHNIC chat about Bruce Boudreau's future with the Canucks, remember the late Eugene Melnyk and look ahead to the off-season for the four teams that have been eliminated.

It would be hard for anyone to believe.

Though Boudreau was hired by Canucks owner Francesco Aquilini, a week before Jim Rutherford came on as president of hockey operations, Rutherford was consulted on the hire.

“I like Bruce a lot,” Rutherford told the media at his introductory press conference on December 13. Rutherford said that before he accepted the job, Aquilini asked him if he would be ok with Boudreau as the coach, to which he responded “yeah, most definitely.”

“I just think based on what happened in the first part of the season, that having a guy like Bruce, where he gives the players a lot of confidence and makes them feel good about themselves, was really the right guy at this time for this organization,” Rutherford said.

But three months later, after the trade deadline, GM Patrik Allvin was less complimentary. Allvin was asked by Dan Riccio in an interview on Sportsnet 650 if he saw Boudreau as his coach long term.

“You know what, we haven’t got into those discussions yet,” said Allvin. “Again, we’re evaluating our team as we move along here. That will be something that we, in our hockey ops, we’ll sit down after the season and talk about it.”

Those were sensible comments, but in hindsight, they do seem ominous.

I asked Boudreau if he’d like to return next season and if he feels he’s earned an extension: “I think I’ve done an ok job… I want to coach forever and I really like Vancouver. So that should answer that” #Canucks

If the Canucks do decide to move on without Boudreau, it’ll be a tough pill for fans to swallow. The Canucks coach, who regularly gets serenaded with “Bruce, there it is” by fans at Rogers Arena, is more popular than many of the current players.

If he does get let go, it would be shocking to everyone, except perhaps Boudreau himself.

After all, when asked about “Bruce there it is” back in December, the Canucks coach said this: “It’s pretty funny. If you lose the next game it could be ‘Bruce, there he goes.’”