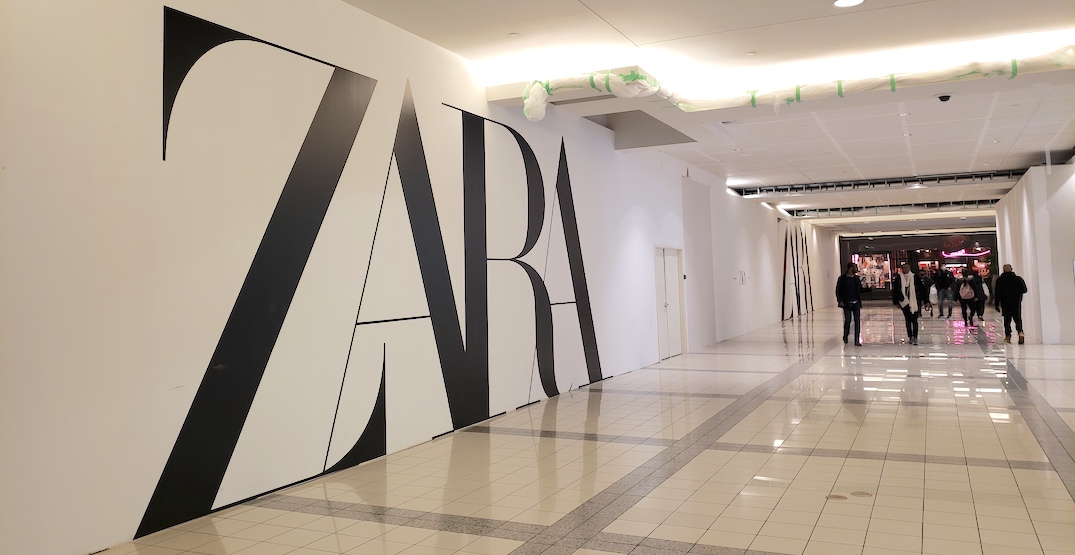 Construction boarding for the renovation and expansion of the Zara flagships store at Metropolis at Metrotown. (Kenneth Chan/Daily Hive)

The Zara flagship store at Metropolis at Metrotown shopping centre is receiving a major renovation that will more than double the footprint of the location.

Construction hoarding has closed off the existing store to allow for the renovation work.

Judy Black, a spokesperson for Metropolis at Metrotown, told Daily Hive Urbanized the store area will grow from its previous size of under 18,000 sq. ft. to about 40,000 sq. ft. The rebuild and expanded store is slated to reopen sometime in the middle of 2021.

When complete, it will be one of Zara’s largest stores in Canada — larger than the 27,000-sq-ft, two-level store that reopened at CF Toronto Eaton Centre in 2015. It is also roughly the same size as the recently expanded H&M flagship store at CF Pacific Centre, which now covers 38,000 sq. ft. over three levels.

Zara’s expansion at Metrotown is achieved by a reconfiguration and narrowing of the mall corridor, and the absorption of several adjacent retail units close to the mall’s office tower entrance.

The added floor area will help address the severe capacity constraints of this particular Zara location, which is one of the mall’s busiest clothing stores, given its exceedingly high traffic volumes.

This is all part of the fast fashion retailer’s new global strategy of spending USD$1.7 billion to upgrade its stores, which will become more integrated with its online business. Along with an updated store look and configuration, some renovated flagship stores have also seen smart mirrors that recognize items customers are holding, robot-powered pick-up locations, self-scan check-out registers for high-traffic locations, and holograms.

However, Zara’s parent company, Inditex, also has plans to close between 1,000 and 1,200 stores under various brands over the next two years in response to COVID-19’s impact on consumer demand, and the resulting accelerating shift towards online retail. The Spanish clothing company’s other brands include Massimo Dutti.

Earlier this year, Zara completed a renovation of its Robson Street store location in downtown Vancouver.