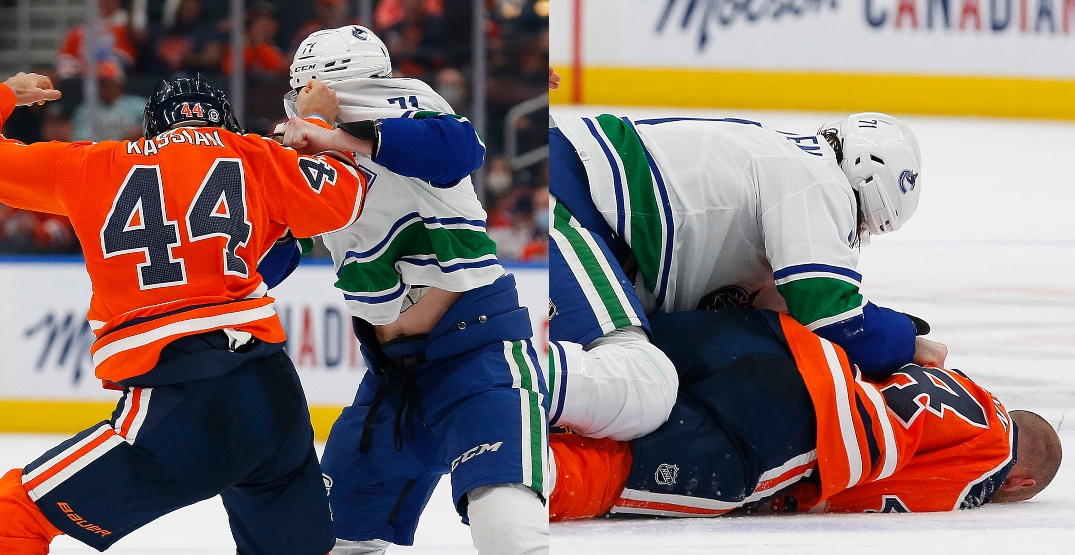 Zack Kassian was cracking jokes in the Edmonton Oilers dressing room, mere minutes after it looked like he may have suffered a serious head injury.

Kassian’s helmet popped off during a fight with Vancouver Canucks forward Zack MacEwen, prior to the Oilers winger falling backwards and hitting his head on the ice.

Kassian and MacEwen dropped the gloves with less than four minutes remaining in Thursday night’s preseason game at Rogers Place in Edmonton. Kassian was motionless on the ice for a moment, which even had MacEwen motioning to the Oilers bench to get a trainer on the ice immediately.

Kassian did skate off the ice under his own power, and after the game, Oilers head coach Dave Tippett confirmed that “everything’s fine.”

“He’s got a pretty good bump on his head from hitting the ice, but he was in good spirits,” Tippett told reporters after the game. “Everything’s fine. He was telling jokes when I came and saw him after the game. He banged his head on the ice pretty good.”

“It’s one of those ones that upsets you. You never want to see that happen. It’s a freak thing, the helmet comes off, and he just falls the wrong way… Lucky it seems like he’s alright.”

Canucks players hadn’t yet received the good news update on Kassian when they spoke to the media, and they were clearly concerned.

Kassian’s former teammate Alex Chiasson, who is now on a PTO contract with the Canucks, was emotional when asked about it post-game.

“That’s tough to see,” said Chiasson. “He was one of my good buddies there. Hope he’s doing alright.”

“It’s scary, it’s terrible. It’s not cool,” said Canucks defenceman Quinn Hughes. “Hopefully, he’s ok. It’s not what you want to see in a preseason game, for sure. It probably didn’t need to happen, but it did.”

“He’s like my brother sitting next to me in the locker room,” said new Oilers forward Derek Ryan. “So to see him like that on the ice… it makes me sick to my stomach. It’s a tough feeling.”

The Canucks and Oilers have one more preseason game against each other on Saturday at Rogers Arena in Vancouver. They’ll meet for a third straight game on Wednesday, back in Edmonton, for the start of the regular season.