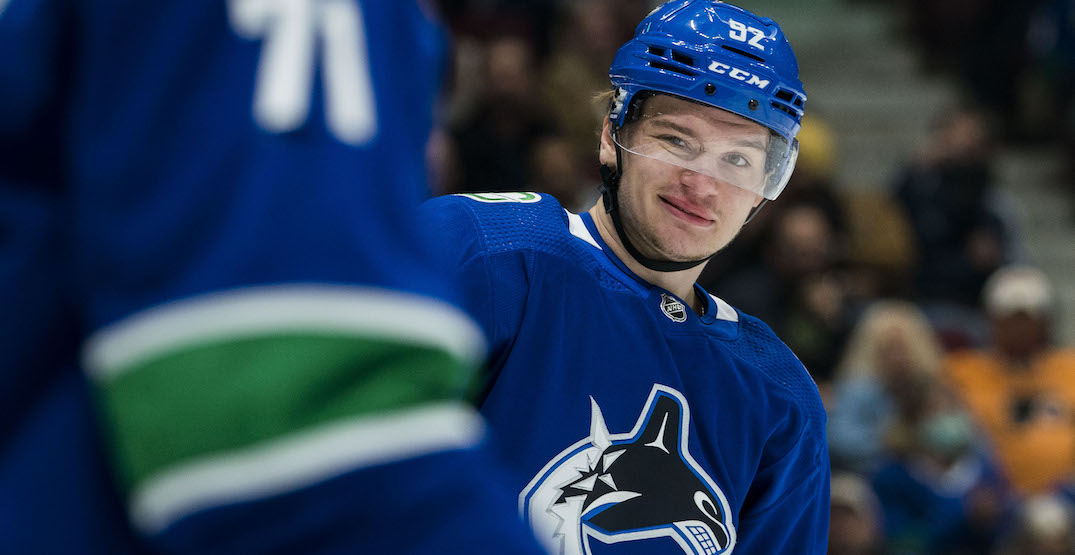 This hasn’t been an easy preseason for Vancouver Canucks head coach Travis Green.

Five key players have been missing in action, and three of them — Travis Hamonic, Brandon Sutter, and Tyler Motte — will likely miss the start of the regular season.

Having Elias Pettersson and Quinn Hughes back in the mix certainly makes Green’s life easier, but there’s still lots of work for the head coach with not much time before the regular season.

Here are six things that the head coach has to solve ASAP.

1. Will Miller play centre or wing?

In an ideal scenario, J.T. Miller would start the season as a winger for the Canucks.

Because of Brandon Sutter’s absence, that seems like it may be unlikely to happen.

A centremen quartet of Elias Pettersson, Bo Horvat, Miller, and Jason Dickinson looks great, although it does leave the Canucks somewhat exposed on the wings. And, it’s no secret that Miller was the Canucks’ best winger during their playoff push in 2019-20.

2. Who lines up with Pettersson and Boeser?

Earlier in training camp, it would have made sense for either Miller or Nils Hoglander to slot in on the top line.

Now, it’s not a guarantee that either player will play alongside Pettersson and Boeser.

Hoglander, Horvat, and Tanner Pearson have been stapled together in recent practices and preseason action, making it seem unlikely that the Swedish sophomore will earn a promotion to Pettersson’s line. However, as we saw in Miller’s first season as a Canuck, things can change quickly once the regular season begins.

As for Miller, he’s still the best candidate to play on that line. It comes down to what Travis Green values more: centre ice depth and a balanced line-up, or a loaded top line.

If it’s not Miller or Hoglander on the top line, then things start to get interesting. Conor Garland could get a look, but if it’s not him, then the Canucks’ options really begin to thin out. Two depth candidates for the enviable spot could be Nic Petan and Vasily Podkolzin.

3. Will Podkolzin make the team?

This question seems all but answered, even if Travis Green put some smoke on the fire earlier this week.

“He’s got to find a way to make it,” says Travis Green of Vasili Podkolzin. “He’s not on the teamy yet. ySame goes for Jack (Rathbone).” #Canucks

Podkolzin had been relatively quiet in preseason action, although Tuesday’s contest against the Seattle Kraken was his best showing so far.

I'm tellin ya. If Podkolzin scores here? Crowd in Rogers Arena explodes so loud that you can hear it in Moscow.

The best guess for Podkolzin right now is that he gets eased into the lineup alongside Miller. You can expect that his ice time will be low, with the rookie unlikely to play much on special teams at the beginning of the season.

It doesn’t make much sense to break up the Canucks’ dynamic PP1.

Pettersson, Horvat, Miller, Brock Boeser, and Quinn Hughes were one of the most productive man-advantage units in 2019-20. Early last season, they actually generated more chances per-60, but suffered through some rotten puck luck.

Oliver Ekman-Larsson and Conor Garland have added an interesting wrinkle to the situation. They were both productive on the man advantage in Arizona, and Ekman-Larsson in particular has looked dangerous there during preseason action.

Hoglander and Pearson seem like other logical candidates to play on the second unit, although it’s not clear who would play centre if Horvat remains on PP1. Petan and Justin Dowling have both had extended looks there so far this preseason.

5. Who will Hughes’ partner be?

This question is simple enough to answer, although it shouldn’t make the fanbase feel at ease.

If Travis Hamonic continues to remain absent from the team, then Tucker Poolman is the next-best stylistic fit on right defence to play with Hughes.

Based on the Canucks roster configuration, it’s a given that Poolman will play higher in the lineup than he should. He struggled in a top-four role with Josh Morrissey last season, although a glass-half-full perspective was that his struggles were increased by injuries and a COVID-19 diagnosis.

6. Which depth forwards make the team?

The absences of Sutter and Motte have created carnage in the bottom six, but there’s some clarity on the situation.

Phil Di Guiseppe has clearly separated himself from the pack. He’s been reliable and physical during the preseason, where he’s largely played alongside Dickinson (both at 5-5 and on the PK).

Dowling seems like the other candidate likely to stick around. He played nearly 20 minutes against the Kraken on Tuesday, and his ability to play centre helps his cause.

Assuming the Canucks keep 13 forwards, that still leaves two spots up for grabs between Petan, Matthew Highmore, Alex Chiasson, and Zack MacEwen. Of those four, Highmore is probably a front-runner for a spot based on his penalty-killing ability, and Petan might have a leg up based on the long looks he’s received throughout preseason action.