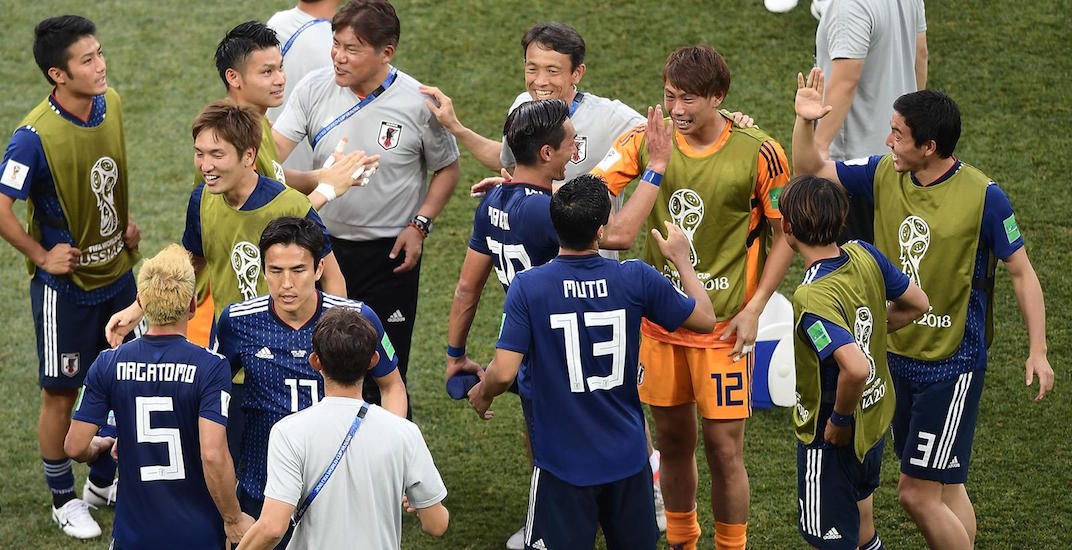 Down 1-0 in the final moments of their final group stage match to Poland, Japan employed an interesting strategy.

They tried to lose on purpose.

Japan holds on for a valuable loss

Given the 1-0 score late in the other Group H match between Colombia and Senegal, Japan knew that if they didn’t concede another goal or get a yellow card, they would likely move on to the Round of 16.

So the Japanese manager instructed his players to play it safe.

Passing the ball around, wasting time, it wasn’t exactly the sort of late-game drama we’re accustomed to at the World Cup. This suited Poland just fine of course, because they were about to secure their first win of the tournament.

#Japan were losing 1-0 in #JPNPOL, but were just WALKING and slowly passing the ball around at the end, because they go through on Fair Play due to fewer yellow cards than #Senegal. Brutal to see, especially since #SEN is such an entertaining and fun team. #SENCOL #JPN #WorldCup pic.twitter.com/LPyckOY2nq

Fans, of course, were not happy, as a chorus of whistles (that’s what they do instead of booing in Europe) reigned down.

It was playing with fire a little bit, because if Senegal had scored a late goal, Japan would be going home. But Colombia held on, and Japan made it through.

Japan and Senegal finished the group stage tied in points, goal differential, and goals-for, plus they tied in their only match against each other. The tiebreaker then went down to ‘fair play points,’ with Japan holding the edge with two fewer yellow cards.

Absolutely shocking what Japan 🇯🇵 did in the last 15 minutes of the game.

Just passing the ball around at the back.

Poland 🇵🇱 just as bad for allowing it.

Japan don’t deserve to progress. Senegal 🇸🇳 were fighting for the whole game!#JusticeforSenegal@Ollie_Bayliss

Here’s the only goal of the match, scored by Poland’s Jan Bednarek:

GOAL!!!!#POL scores to play spoiler! As it stands, #JPN would be ELIMINATED from the #WorldCup pic.twitter.com/t0Dy7WyDM1

Here’s the goal, a thundering header by Yerry Mina in the 74th minute, that won Group H for Colombia.

YERRY MINA DOES IT AGAIN!!

His second goal of the #WorldCup has #COL on the verge of advancing to the Round of 16. #WorldCup pic.twitter.com/nJXBZx73qJ

I wish i was in Medellín right now #colombia 🇨🇴 pic.twitter.com/KpXxP0H9wj

Senegal, in their second-ever World Cup, were eliminated in cruel fashion. It’s the first time in World Cup history that a team has been eliminated on the basis of fair play points.

There wasn’t a whole lot to play for, despite top spot in Group G being on the line, between England and Belgium.

First place meant a favourable Round of 16 match against Japan, but likely having to face Brazil in the quarter-final. The second-place team would have to face Colombia, a tough opponent, but would get the winner of Switzerland and Sweden in the quarters.

With both teams resting some key players, it was Adnan Januzaj scoring the only goal of the match to give Belgium a 1-0 win, and top spot in the group.

Adnan Januzaj…TAKE A BOW#BEL takes the leads on a FANTASTIC move & finish by Januzaj #WorldCup pic.twitter.com/Lg3cpwYVDQ

With both teams eliminated from the knockout round, there was little to play for on paper between Panama and Tunisia.

Little to play for, except pride. And at the World Cup, pride means a lot.

Panama opened the scoring in the first half, but Tunisia got two back in the second, to secure a 2-1 victory.

A deflection gives #PAN its second-ever #WorldCup goal as they take a 1-0 lead. pic.twitter.com/DzT6kUNPUe

Ben Youssef finishes off beautiful passing play to even the score for #TUN#WorldCup pic.twitter.com/EcI4INIesb

#TUN is putting on a PASSING CLINIC!

This time Wahbi Khazri finishes off the beautiful passing play to give Tunisia the lead.#WorldCup pic.twitter.com/xUki8klezb