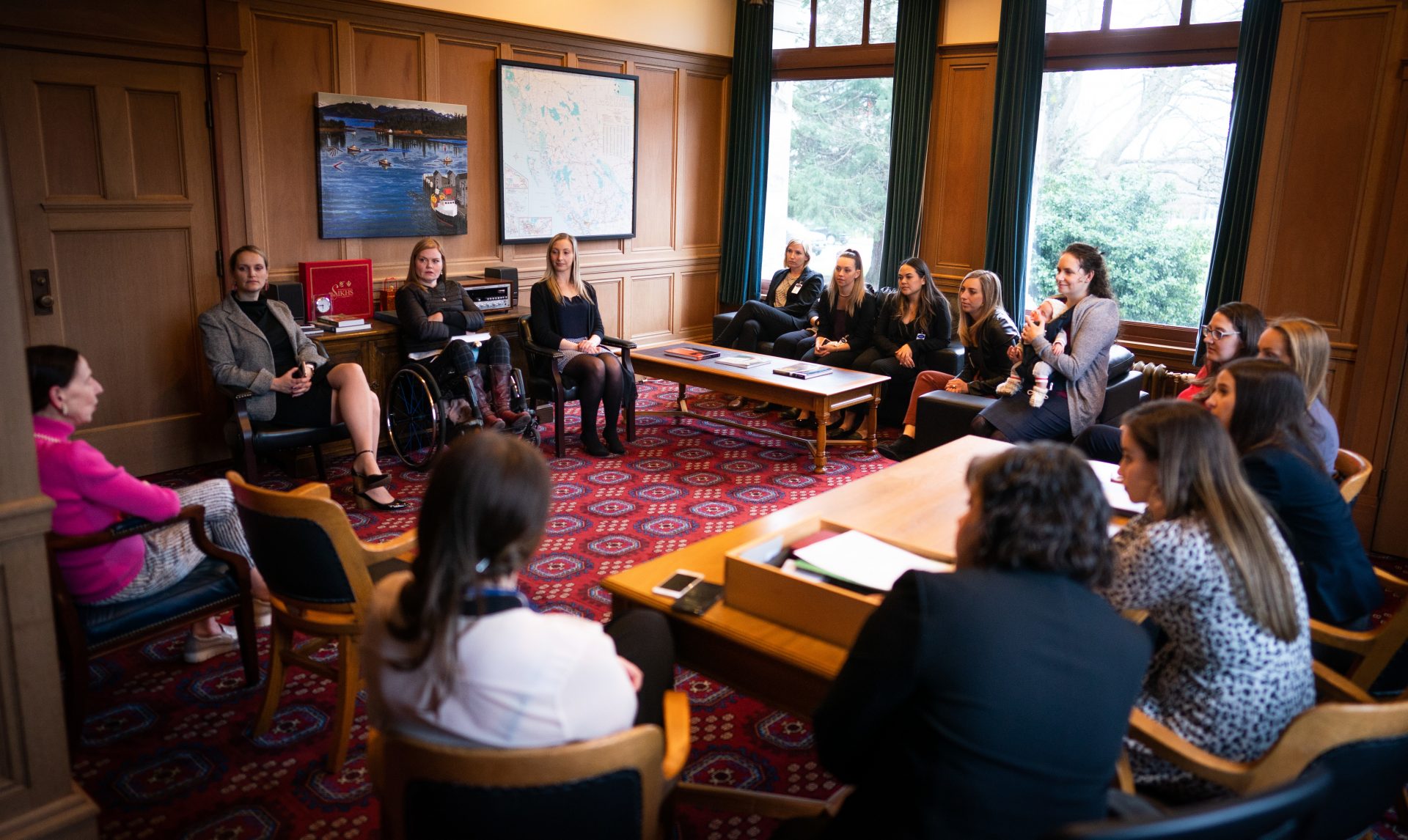 Kirsten Sharp spent a day at the BC Legislature/John Lehmann.

Written for Daily Hive by Kirsten Sharp, a Producer based in Vancouver. You can follow her @kirstennadine on Instagram.

Walking down the halls of the BC Legislature, through a sea of beards, moustaches, a bright pink blazer is a welcome sight. It belongs to Shirley Bond, Liberal Party MLA for Prince George-Valemount, and the first female Attorney General in British Columbia’s history in 2011. She’s one of three women on the wall of photos of Attorney Generals at the BC Legislature in Victoria. On the Premier’s wall? Only two women.

What about MLAs? Currently, BC ranks fourth behind Ontario, Quebec and Northwest Territories, with 34 of the 87 elected members being women for a total of 39% of the Legislature. That’s up from 29% in 2009.

Have you ever wondered what a career in politics would look like? I had the chance to find out. I was one of 12 women who participated in “Women’s Day Shadow in the Legislature” this week. If you’re anything like me, this didn’t sound appealing. My first reaction was, “No, but thank you.”

I work in media and television; an industry that is fast-paced, ever-changing and has a myriad of challenges on a daily basis. I thrive on it. I thought to myself, “what about politics could ever interest me?” Thankfully, curiosity got the better of me.

Kirsten Sharp spent a day at the BC Legislature/ John Lehmann

Our day started with Question Period, a 30-minute session of rapid-fire questions asked to the Premier and/or other Ministers, while the Legislature is sitting. A chance to critique policy and daily happenings in the province.

What I pictured: 87 MLAs and other attendees talking about laws and politics and me falling asleep in the gallery.

What actually happened: It started with the introduction of visitors in the gallery. A long-drawn-out process that lasted almost 20 minutes. I thought to myself, “What was I getting myself into?” I prepared for my nap.

Then, the excitement began. It was like watching the filming of an intense courtroom battle, except without the multiple takes. There was banging on tables, outbursts of joy and disappointment, whispering, note passing, and general chaos. Members are human, they are passionate, and even have a sense of humour.

This all happened on Thursday, March 5, during Question Period at the Legislative Assembly. Don’t believe me, it’s all logged on the Legislature’s website. Instead of falling asleep in my chair, I was on the edge of it.

Next up; some one-on-one time with some of BC’s top MLAs who happen to be women.

What did I learn? The job of an MLA is not for the faint of heart. Most of the job is spent in their own constituencies, with long hours, a huge responsibility and considering the expectations of the job, not a lot of compensation. Daily issues occur over widespread areas, frustrating battles are fought; some won, some lost. A work-life balance is hard to maintain. Important family events are missed, friends are put on the back burner, and extracurricular activities are forgotten. 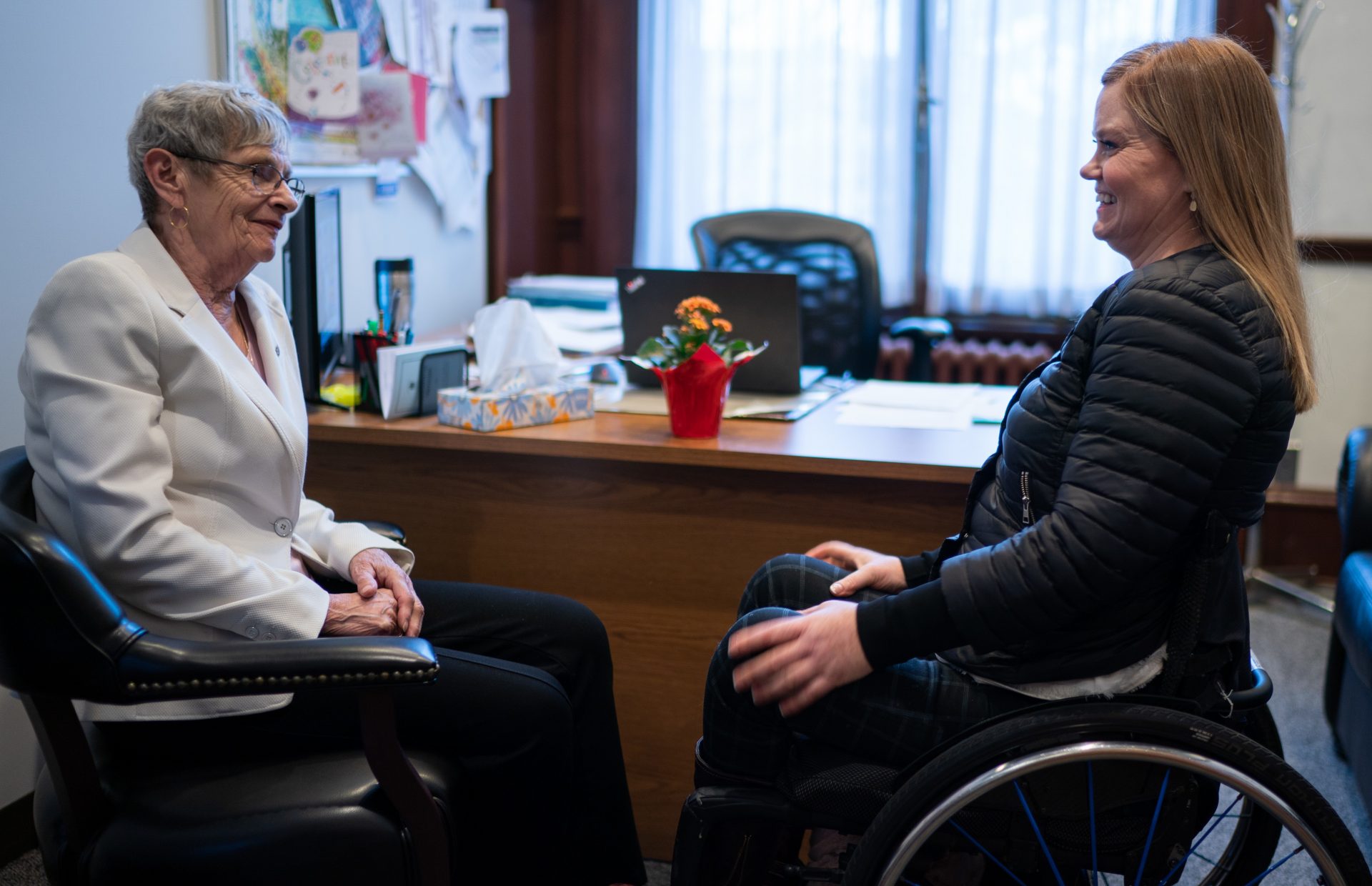 But, for everything you miss out on, there is something to be gained. Every day you fight hard for your constituents, and you have the chance to make a huge difference. For those willing to take on the challenge, the positive outweigh the sacrifices.

If that responsibility sounds overwhelming, a career in politics isn’t completely lost. It takes a village. Most of the BC Liberals’ “behind the scenes” team are women. A large part of the supporting team are roles that are highly involved in the daily activities of the government. The roles are fast-paced, challenging and dynamic and offer the chance to be a part of a team of influential, smart, dedicated people who care. I was only there for a day, and I already felt like I was a part of the family.

So how did these women choose a career in politics? Was it a conscious decision? For some it was, but for most of the women I spoke to, they somehow fell into it. Everyone had a different story, but what was similar for all was the fact that there is never a dull moment and they absolutely love what they do.

Sounds interesting but still on the fence? The best way to find out for yourself is to get involved and volunteer.

Already convinced a career in politics is for you? There are many women who have gone before you who are ready and willing to support you. Just reach out to what of them.

My favourite part of the day was during question period when Premier John Horgan, in frustration about questions regarding the protestors who were let inside of the legislature the night before exclaimed; “We have politics outside. We have politics inside. Just another day in British Columbia.”

In the end, politics are everywhere. But, if you want a chance to influence the lives of British Columbians, perhaps an “inside” job is for you. And if you’re a woman, even better.