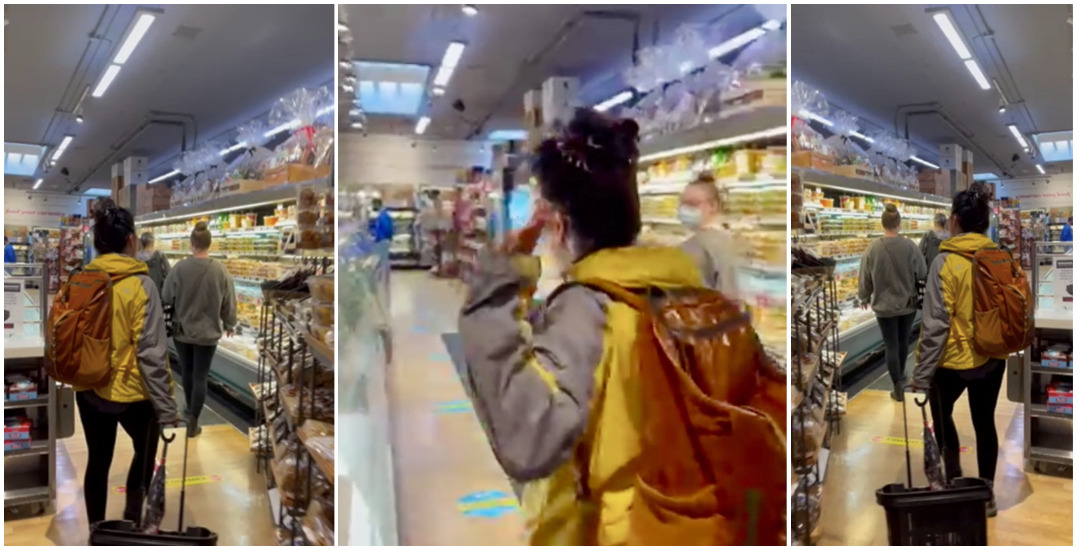 A 23-year old man, who after publication asked to remain anonymous, was doing some grocery shopping on Sunday night at Meinhardt in South Granville.

They observed a woman not wearing a mask, and politely asked her to put one on, when she suddenly became vulgar and aggressive.

You can watch the video here.

It all started after they got off work at 5:30 pm.

“I work just down the street, so I frequent that grocery store often, it’s actually my favourite grocery store,” they said in a conversation with Daily Hive.

They had already cashed out when the woman in question entered the store.

“I and a couple other people had politely asked her to wear a mask,” they recounted.

“Immediately she got super hostile and aggressive against us all.”

That’s when they decided to take matters into their own hands, but it didn’t pan out the way they might have hoped. They pulled out their phone and started filming.

After following her with their camera out, the woman turned around and swung at their phone, knocking it onto the ground along with his belongings.

They told Daily Hive that they were disappointed with the way the staff handled the situation.

“I was given blank stares, they didn’t even say anything to me even though they witnessed what just happened.”

They felt the store could have done more. “Rather than the manager supporting me, he just began to take pictures and videos of me.”

“When the police arrived, they weren’t very helpful at all,” they added. “One of the police officers stated, and I directly quote, ‘If someone was filming me I’d probably hit them too.'”

According to the anonymous shopper, Meinhardt had informed him that the woman had a mask exemption, something the VPD confirmed in a statement to Daily Hive.

“This incident occurred last night at about 6 pm when a man saw a woman without a mask on inside the store and allegedly began accosting her by filming her and following her around. The woman, who is a regular at the store and has documentation that exempts her from wearing a mask, smacked the phone from his hand,” said Sgt. Steve Addison.

The VPD added that there were no injuries after an investigation was conducted.

“We understand that everyone is a little on edge after 15 months of the pandemic, and this can easily lead to conflicts between people. It’s always best for someone to call police to report an incident rather than taking matters into their own hands.”

Daily Hive has reached out to Meinhardt for a response.