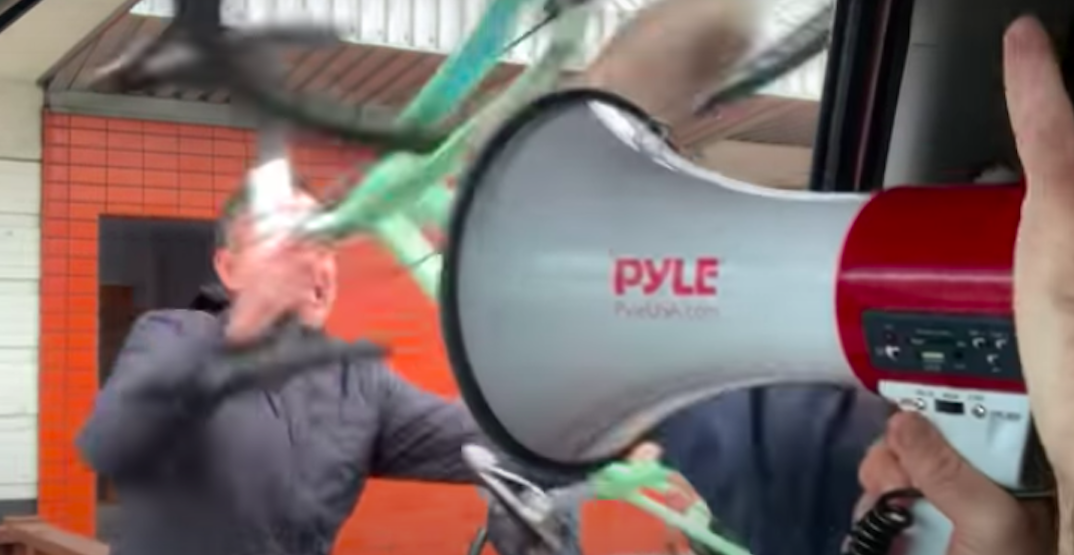 Vancouver police said they are recommending charges against a man who smashed the window of a truck during a confrontation with an anti-masker that was caught on video.

Alexander Lasarev told Daily Hive he was taking part in a peaceful car rally protest on March 28, when a man on the sidewalk “lost control and attacked our vehicle with his bike.”

The man ultimately smashed the truck’s passenger window, and Lasarev suffered minor cuts on his hand and face. “The police were called, and the man was taken into custody,” he said.

VPD Const. Tania Visintin told Daily Hive that around 3:30 pm on March 28, a convoy of vehicles were taking part in an anti-mask rally on Main Street.

“A passenger in one of the vehicles was talking into a bullhorn and pointing it out the window,” she said. “There was a confrontation with a cyclist, who was captured on video striking the vehicle repeatedly with his bicycle.”

Witnesses to the incident detained the cyclist until VPD arrived and took custody of him.

Now, police are recommending charges of mischief and assault with a weapon against a 52-year-old man from Vancouver, she said. The man is scheduled to make his first appearance in court on May 12.

Lasarev shared video of himself in the convoy online,  and the confrontation begins at the 3:15-minute mark of the video.

Back in February, Lasarev was identified as the man berating the employees at Kerrisdale Cameras in Vancouver.