Just two days before their MLS season opener, the Vancouver Whitecaps have made a major trade.

Centre back Tim Parker is going home, as the Whitecaps and New York Red Bulls have swung a deal involving the Hicksville, New York native.

The writing was on the wall for Parker, who wanted more money than the Whitecaps were willing/able to pay, leading to him to request a trade last month. Had Vancouver held onto him, they would have risked losing him for nothing as a free agent.

Parker had been a member of Whitecaps FC since 2015, when he was taken 13th overall in the MLS SuperDraft. He quickly developed into a dependable centre back and a fixture on the back line with captain Kendall Waston.

This trade is the latest move by the Whitecaps in an offseason full of shakeups. Notable players gone from last season include David Ousted, Jordan Harvey, Christian Bolanos, Tony Tchani, and Fredy Montero.

In their place are a number of new names, including Jordan Mutch, a midfielder formerly of Crystal Palace in the EPL, whose one-year loan to Vancouver was officially announced on Friday.

Those wondering why TAM would potentially be shipped by #RBNY to #VWFC: Keep in mind that Felipe is a contract that is roughly triple what Parker currently makes. Vancouver would want/need to offset that.

Sidebar: @FeliMartins8 is one of the classiest professional athletes I've ever had the fortune to cover across any sport during my 13 years in this business. A tremendous soccer player and competitor. Same can be said of him as a leader and a father. Simply put, a good man. #RBNY

While the Whitecaps have developed a reputation for being a stingy team when it comes to their payroll, it should be stated that they didn’t give away Parker for nothing.

“As always, this decision was made in the best interest of our club in the short, medium, and long term,” said Robinson in a media release.

In Felipe, the Whitecaps get a deep-lying, creative midfielder who has started 186 of the 193 matches he’s played in MLS, including all 33 he appeared in last season.

“Felipe has consistently proven to be one of the best box-to-box midfielders in Major League Soccer,” Robinson said. “He’s fiercely competitive, very comfortable on the ball, and creative going forward. We firmly believe he’s someone that will make the players around him better and we’re delighted to add him to our group in the prime of his career.”

Here’s a look at Martins’ MLS stats with the Montreal Impact and New York Red Bulls: 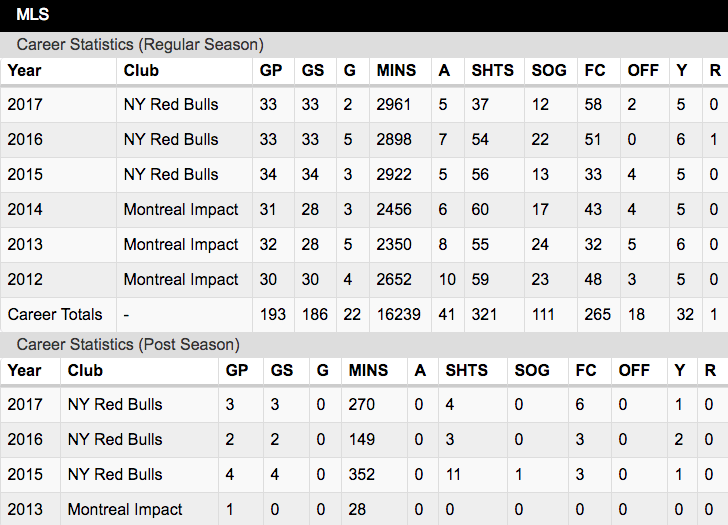 Prior to making the move to MLS, Felipe plied his trade in Italy with Calcio Padova, as well as Swiss clubs FC Winterthur, FC Wohlen, and FC Lugano.

The Whitecaps also announced on Friday that Sunday’s match against Montreal will indeed set a new attendance record for a home opener in Vancouver – breaking the mark of 25,711 set in 1980. “Limited seats” still remain for the match, with seating expanded beyond usual capacity to include the entire lower bowl at BC Place.