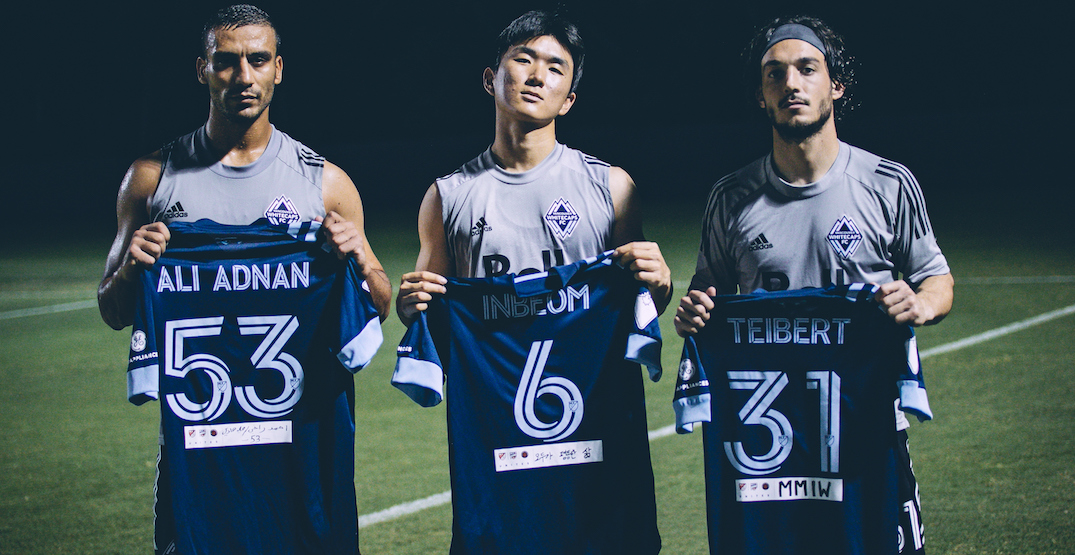 At long last, the Vancouver Whitecaps have a match to play tonight.

It’s been a while, 130 days in fact, since their last one. They’re the first Vancouver pro team to return during the pandemic.

The Whitecaps kick off at 6 pm tonight, in their opening match at the MLS is Back tournament in Orlando against the San Jose Earthquakes.

Here’s everything you need to know.

There’ll be a new addition to each Whitecaps player jersey tonight, as players get the chance to write a personal message related to social justice.

Tomorrow night is about more than sport. It's about using our voice. ✊

For Russell Teibert, it's about highlighting Missing and Murdered Indigenous Women.

Longtime Whitecaps midfielder Russell Teibert, who will be wearing the captain’s armband, has written “MMIW” on his jersey, which stands for “Missing and Murdered Indigenous Women.”

Other messages include “Say their names,” “George Floyd,” “Respect,” and “Equality.”

Many players have written messages in their native language, including Iraqi midfielder Ali Adnan, whose message in Arabic is remembering Ahmed Radi and Ali Hadi, Iraqi soccer legends who succumbed to COVID-19. Inbeom Hwang, meanwhile, has written “An equal life for all” in Korean characters. 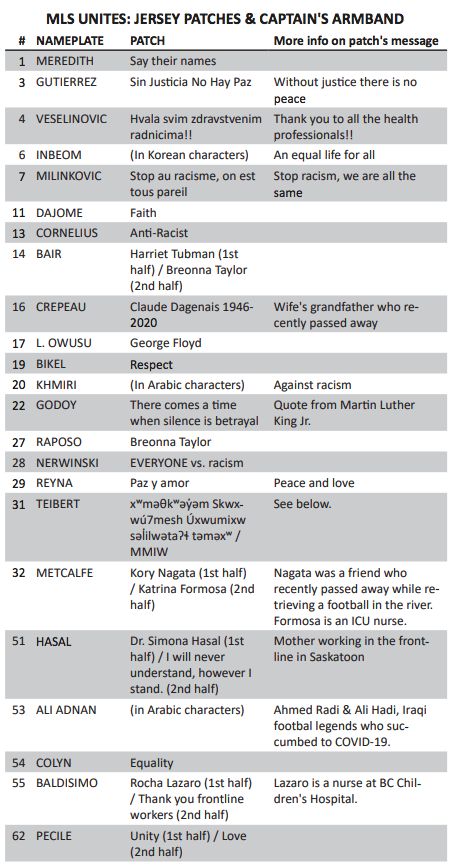 The Whitecaps are the last team to begin play in Group B, and the group is wide open. The Seattle Sounders are without a win in two matches, following a draw against San Jose and a loss to Chicago.

A win for Vancouver tonight would put themselves in a first-place tie with Chicago, with games in hand on both Seattle and San Jose.

The top two teams in each group, plus the four best third-place teams, will advance to the Round of 16. Group stage matches will also count towards the MLS regular season standings, while the winner of the tournament will gain entry into the Concacaf Champions League.

The Whitecaps have two more group stages matches after tonight, against Seattle on July 19 at 7:30 pm PT and July 23 against Chicago at 6 am PT.

The biggest challenge for the Whitecaps is expected to be in the goal-scoring department. Three of their strikers — Lucas Cavallini, Fredy Montero, and Tosaint Ricketts — didn’t make the trip to Orlando for the tournament. They’re also missing midfielder Andy Rose.

So it will be up to the players that manager Marc Dos Santos has at his disposal to get things done. Perhaps 20-year-old Canadian Theo Bair gets a chance to flourish.

It’s going to be a hot and humid night in Orlando, with the match time temperature expected to be at 28 degrees, but will feel like 32.

The weather in Florida at this time of year is unforgiving, which is why the match is starting at 9 pm local time. Players will receive two hydration breaks during the match because of it.

Click the link below 👇 to purchase your tickets, it's that simple! https://t.co/M49X8JcHBy pic.twitter.com/uRqASfk93R

The Whitecaps are running their 50/50 program online on each of the three match days during the tournament, with tickets going on sale beginning at 6 am. Proceeds will benefit Covenant House Vancouver and its ongoing work to improve the lives of Vancouver’s homeless and at-risk youth.

“We are incredibly grateful for the support from Whitecaps FC and their dedicated fans,” said Allison Briggs, development officer of community giving for Covenant House Vancouver. “The funding we receive from the 50/50 program is critical right now due to the COVID-19 pandemic. It will ensure some of our most vulnerable young people’s immediate needs are met; having a warm bed, nutritious food, access to counselling and so much more.”

There are four ticket pack options available for purchase:

If you’re looking for a place to watch the match, which can be seen on TSN in Canada, there are over 70 pubs in Vancouver holding watch parties.

Wherever you are in BC, there'll be somewhere to watch on Wednesday 🍻📺

Scroll 👉 for the full list of venues showing #VANvSJ 📜

“All establishments will be abiding by physical distancing and health regulations,” the Whitecaps said in a media release. “Fans are encouraged to call ahead as space may be limited.”